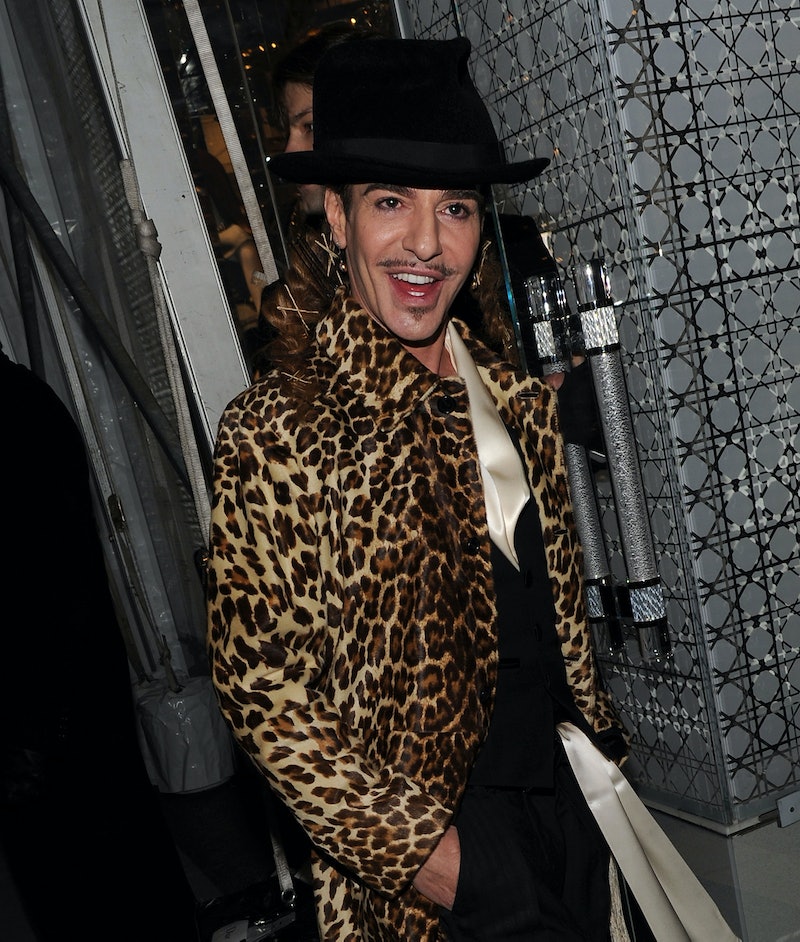 John Galliano, who was dismissed from Dior after running his mouth and making horrifying anti-Semitic comments while drunk in a Parisian bar in 2011, has a new job. Galliano is now creative director of Maison Martin Margiela, the Italian brand. So Galliano has a new home at a new fashion house. It had been rumored that Galliano x Margiela would happen for weeks. In his new role, the formerly disgraced Galliano, who designed Gwen Stefani's pink dip-dyed wedding gown and who claimed to not remember his racist rant, will be tasked with overseeing all Margiela lines, from couture to ready-to-wear. His debut Margiela designs will be for the brand's artisanal line, which will show during Paris Couture Week in January.

As is the case in the celeb world, the fashion universe loves a comeback. See Kate Moss, for example, who rebounded after having a photo of her snorting cocaine splashed across a tabloid. So it's very likely that Galliano, who has expressed remorse for his words, could dazzle with his designs once again. But he will likely also be faced with plenty of people who have forgiven but won't forget — and probably some who have no intention of forgiving, understandably. Dior spokesmodel Natalie Portman, who is Jewish, announced that was appalled by Galliano's words when the story initially broke.

That said, Margiela is extending Galliano a second chance.

"Margiela is ready for a new charismatic creative soul," said Renzo Rosso, president of OTB, which owns the brand, said. "John Galliano is one of the greatest, undisputed talents of all time. A unique, exceptional couturier for a Maison that always challenged and innovated the world of fashion. I look forward to his return to create that fashion dream that only he can create, and wish him to here find his new home."

Russo also said, "I couldn't be happier, for the Maison Margiela, which deserves a new visionary leader, and for John Galliano, who is a talent beyond definition and time. I always believed in brave, unpredictable choices and this one is no exception."

A brief history of Galliano and fashion: The designer had his own label, which went bankrupt in 1990, followed by stints at Givenchy and then his lengthy tenure at Dior, where he was decorated with awards and where he reigned supreme for years before his mouth got him fired. He subsequently entered rehab for alcohol and substance abuse.

Galliano embarked on a temporary, one-season design residency at Oscar de la Renta for the Fall/Winter 2013 show. He has said that he is ready to create again and that he hoped for a second chance after atoning for his sins while largely exiled from the world of fashion. Galliano also mentored fashion students at Central Saint Martins in London, his alma mater.

Despite his verbal gaffes and personal problems, Galliano has demonstrated his genius throughout his career. While Maison Martin Margiela is a brand that has been making waves in the fashion world, it's not, well, Dior, which has bottomless resources and years of history behind it, as Vogue pointed out.

That said, Galliano wowed for years and he can again with his much-hoped-for second chance from Margiela. It's likely he wants to full redemption, on both personal and professional levels.

No doubt Anna Wintour and the rest of the fashion world will be watching.