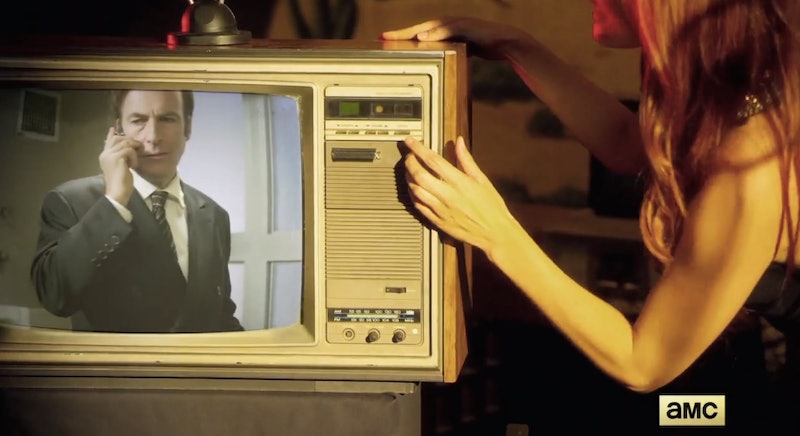 Brace yourselves, Breaking Bad fans – we're getting our first look at the series' much-talked-about spin-off Better Call Saul via a music video just released by AMC. And it really, really isn't disappointing. When it comes to Better Call Saul, I feel like Breaking Bad fans have been grappling with split feelings about it since the news first broke: on one hand, Vince Gilligan created something so darkly engrossing and altogether consuming that not only did we not want to leave after the series' finale, we almost didn't know how. It's like real life didn't quite fit after having spent so long invested in a world that was equal parts as human as anything we'd known in our personal lives, and yet entirely foreign. So when considering the idea of a spin-off – a type of TV venture that notoriously rarely comes to any good – we're torn between wanting more of something we love, and being decidedly opposed to anything which might dilute the brilliance of what the world of Breaking Bad already is. Like, you built a thing which is damn near perfect, Gilligan – why risk tarnishing it?

This video is (rumors, vague allusions, and speculation aside) our first real look at what might be waiting for us once the show arrives. As much as I was ready (seriously, so ready. My shade-throwing hand was warmed up as I clicked "play") to groan and issue premature declarations that I would never watch Better Call Saul and anyone who did was absolutely not coming to my birthday party, it turns out, I'm kinda completely into this. Who's to say how much the show itself will be anything like this video, but if it is, Gilligan and Company hit the spot I didn't even have the foresight to imagine they should be aiming for: as hideously zany as Breaking Bad was stark and unrelenting; like a southwestern Twin Peaks which is a thing I didn't even know I wanted, but now feel certain I can't live without, which I'm pretty sure is exactly what Vince Gilligan was going for.