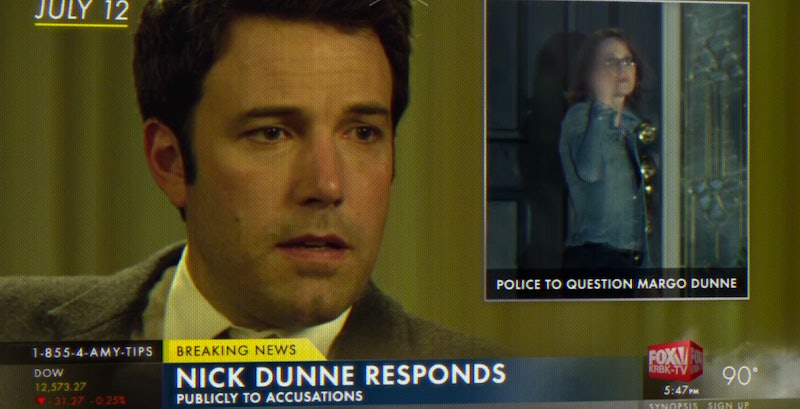 By some miracle, Gone Girl managed to squeak by Annabelle to come in number one at the box office this weekend. Despite the revelation that Ben Affleck's penis would cameo in Gone Girl , it initially seemed like the viewing audience would rather check out the demon doll instead. However, if you shelled out the money to go and see Gone Girl this weekend, then you might have spent a lot of that time categorizing the differences between the film and the book. And there were many, which is to be expected when you take a novel and adapt it for the big screen. And yet some of the elements that they were forced to cut between the novel and the film made the film come across as, well, a lot more sexist than the book.

Spoilers ahead. Both Gone Girl and author Gillian Flynn have been accused of misogyny in the past due to Amy Dunne's villainous nature and the stereotypical ways in which she goes about enacting her vengeance against those she feels have wronged her. However, whether or not you feel that Gone Girl was a misogynist novel doesn't change the fact that there are some scenes in the Gone Girl film that, without the context of the book, just seemed a lot more sexist than they originally were. In fact, there are four moments from Gone Girl that just felt off.

In the Movie: When Nick tries his best to be nice to all the people at the volunteer center who are helping him look for Amy, he's approached by Shawna Kelly, a gorgeous woman who seems really eager to give him food and take selfies with him. When Nick begs her to delete the incredibly incriminating picture of him, you know, taking grinning photographs with other women at a volunteer center based around searching for his missing wife, she throws a fit and sells the photo to Ellen Abbott.

In the Book: Shawna flirts with Nick several times before his patience and Mama's Boy politeness wears thin and he rejects her advances. The film painted her as self-absorbed and a bit crazed, to not understand why Nick needed that picture deleted and to react to him trying to grab her phone as if he'd attacked her, whereas in the book her reaction is a lot more justified. I mean, he had every reason to be a jerk to her by that point but at least she had his (polite) rejection and him blatantly ignoring her afterward to base her righteous fury on.

In the Movie: Andie comes to Nick while he's hiding out at his sister Margo's house and they have sex right there on the couch that he's crashing on. That's the last time that we see Andie until she is giving a press conference alongside Amy's parents, expressing her sorrow over her affair with her married professor. Tanner Bolt warned Nick that Andie would talk eventually, but Nick continues to defend her as a good girl even though she blatantly betrayed him for no apparent reason.

In the Book: Nick tried to break up with Andie because it would be easier for him if she wasn't around anymore, but the indelicate way he made this all about him and the fact that he couldn't promise them any kind of future together made Andie feel like something to be discarded. She attacked him and then was later seen at the press conference. Again, the film cuts out an instance of Nick being a jerk — even if it was justified in his circumstances — so it seems like women are turning on him for no reason.

In the Movie: Nick shows up at the volunteer center and starts shaking hands and kissing babies like he's running for office or something. Amy's parents, Rand and Marybeth, are giving him dirty looks the entire time, but, hey, Nick was raised to be a nice guy. Still, that doesn't stop Margo from coming to Nick later to tell him that Marybeth is angry at him for... being so charming? Although, in Marybeth's defense, her anger quickly cooled when Nick explained himself.

In the Book: This scene never happens. Oh, sure, Nick mentions that the volunteer center is starting to feel like a family picnic with how many people are socializing and how many of his ex-girlfriends show up, but neither of Amy's parents get upset with him for it. I'm really unsure why this was changed for the movie and why Amy's mom was the only person with a chip on her shoulder about it. You'd think it would be both of her parents or neither of them.

In the Movie: Detective Rhonda Boney, Margo, Nick, and Tanner Bolt meet one last time to talk about how Nick is living in fear of his life because they can't catch Amy in her lies. And they are pretty blatant lies, even more blatant than in the book. However, Boney decides to kanyeshrug this one out and take off because, after all, this is no longer her jurisdiction. After spending the film being as sympathetic to Nick as she could, I guess now she'll just do something if Amy actually murders him?

In the Book: Amy's alibi for her disappearance is way, way more airtight, which just makes Boney, Margo, and Nick more determined to catch her in a lie. Unlike the parts of her alibi in the movie that Amy had to fudge over by playing up the sympathy card, it was hard to find any kind of thread to pull in her explanation in the novel. That's why Boney continued to meet with Margo and Nick in the hopes that Nick could get a confession or some kind of evidence to put a sociopath like Amy away for good, because the Boney of the book cared about doing what was right.