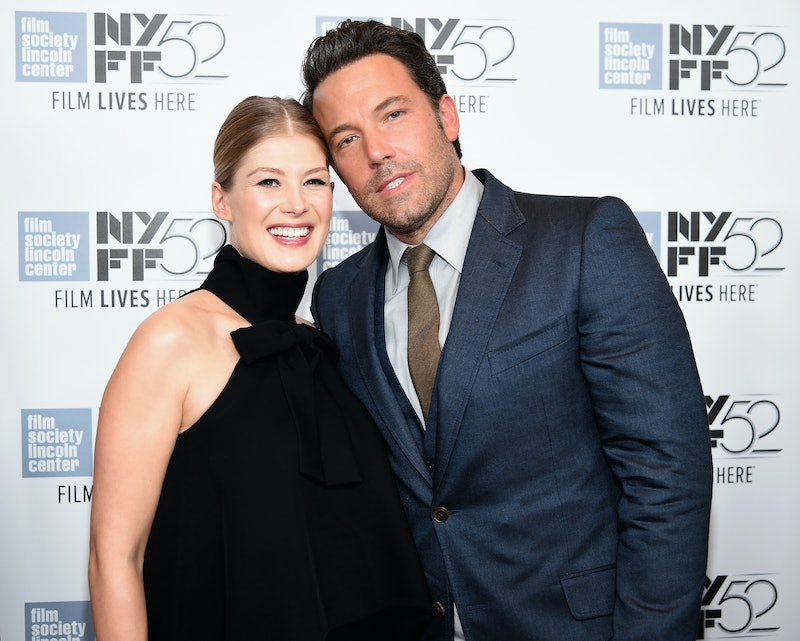 Were you planning on watching Gone Girl when the movie comes out on Oct. 3? For some, the answer to that question might have been no before Wednesday morning. Why? Because on Wednesday morning, the news broke that Ben Affleck's penis would be in Gone Girl, something Affleck admitted to in an interview with MTV on Tuesday. This is something that wasn't noticed by those who watched advanced screeners of the film — because the penis reveal was just a quick shot of what Gawker refers to as "side-dong," not because Affleck's junk is insubstantial — but this penis is all anyone can talk about today. In fact, Vulture has even provided people with instructions on how to see Affleck's penis, if they are so inclined.

But you won't find millions of people tweeting about the appearance of every set of breasts in the movie. No one batted an eyelash at the fact that Rosamund Pike is shown in a bathtub in the trailer or at the fact that she is quite likely going to appear topless if she's involved in any of the sex scenes in the film. The film is rated R for "a scene of bloody violence, some strong sexual content/nudity, and language," but the strong sexual content/nudity only became an Internet sensation when it was revealed to contain a glimpse of Affleck's member.

Simply put, this is because of the sheer saturation of female nudity in modern day society. Women are twisted into spine-bending sexy poses on comic book covers, such as Marvel's Spider-Woman #1 cover. In the commercial world, sex is used to sell even the most unsexy of products, with clothing stores like American Apparel using barely-dressed models for their advertising campaign and body sprays like AXE promising in their commercials that scantily-clad women everywhere will be all over you. And with these ads making it onto the billboards that we pass by each day, the magazines that we read while we wait at the doctor's office, and the commercials we see in between our television shows then it's no wonder that female nudity is no cause for alarm or interest among the general audience anymore.

Meanwhile, despite The Guardian's 2008 review of Forgetting Sarah Marshall (which featured Jason Segel appearing full-frontal) accusing America of having a fear of male nudity, it appears from works like Watchmen, from Harold & Kumar Escape Guantanamo Bay, from Forgetting Sarah Marshall, and now from Gone Girl, that penises in film are more hilarious than they are alarming. Seeing Affleck's penis on the big screen this once in a blue moon has far outshone the actual plot of the film right now, as far as the people of Twitter are concerned. Fans are either becoming very, very entertained at Affleck's expense...

Or openly admitting that they or anyone they know will now only be going to watch Gone Girl because of the novelty of a penis...

It seems like there is no equal reaction to female nudity in film anymore. The history of nudity in film is long and convoluted, but since the turn of the century — and especially in the last decade alone — we've become desensitized to seeing nude women. Between shows like Game of Thrones and True Blood, the only time a nude scene becomes noteworthy anymore is when something particularly shocking happens in it aside from the nudity — such as the controversy over Cersei's upcoming nude scene in a church on Game of Thrones — or when it comes to the age of the actresses involved, such as the controversy over Dakota Fanning's upcoming full-frontal scene in the movie Very Good Girls.

Why? The obvious answer is sexism. This Jezebel article from 2010 still holds true four years later. "Think of how many times you've seen a naked woman in a film as compared to a man; that's because straight men are turned on by the sight, and women aren't turned off. Homophobic Hollywood doesn't think the same is true of the opposite, so naked men are a rarity." Some directors, like Judd Apatow, have made a conscious decision to try and change that perspective by putting a penis in every one of his movies, but if the reaction to the Benis is any indication, America's "fear of male nudity" has been replaced with a frank fascination and amusement.

So with the nudity standards in Hollywood having to rise in order to shock or alarm people, will it be long before the MPAA has to change the standards for what nudity constitutes an R rated film again? According to the MPAA Film Ratings website, their breakdown for what kind of nudity constitutes what rating is currently as follows:

PG-13: More than brief nudity will require at least a PG-13 rating, but such nudity in a PG-13 rated motion picture generally will not be sexually oriented.

R: Intense or persistent violence, sexually-oriented nudity, drug abuse or other elements, so that parents are counseled to take this rating very seriously.

Their rating rules don't specifically break down nudity by gender, but it's common knowledge that the MPAA has always been notoriously stricter on female nudity than it is on male nudity. You can show a man completely naked save for a pair of boxers and still call yourself a PG film, whereas a single glimpse of a woman's nipples is an immediate cause for an R rating. Take the controversy around Eva Green's Sin City poster for example. The poster received criticism from the MPAA for what Page Six called showing "too much boob." And yet posters like 2012's Magic Mike, in which the main cast is wearing even less than Green, got a free pass.

The contrast between viewing audiences being so used to seeing female nudity that it's become common place and a go-to method of advertisement for even the most random of products, and the MPAA being stricter about its policing of the bare female form than its policing of the bare male form is a double standard that has had unclear ramifications on the film industry at large. If this obsession with Affleck's penis is an indication that audiences are moving into a phase where more male nudity is the novelty they want to see as opposed to the female nudity they are shown everywhere else, is that really much better? Either way, it involves the objectification of an entire gender for the purpose of selling something, be it a product, a television show, or a film.

Of course, there will always be sites like Mr. Skin devoted to finding and immortalizing every individual instance of female nudity in films, but the rise of male nudity in the last few years have launched a spin-off site called Mr. Man devoting to doing the same thing with instances of male nudity. At present, the amount of female nude scenes archived on Mr. Skin far outnumber the amount of male nude scenes archived on Mr. Man, but the fact that such a sexist site saw the market for showing the other side — so to speak — could be an indication that America is slowly moving past the strange taboo on male nudity in film and toward a more even-handed future.

More like this
Daryl McCormack On His Unusual First Audition With Emma Thompson
By Olivia-Anne Cleary
Everything To Know About 'The Hunger Games' Prequel Movie
By Grace Wehniainen and Radhika Menon
What’s New On Netflix: 'Stranger Things' & 'Mean Girls'
By Arya Roshanian
What Does The Presley Family Think Of 'Elvis'?
By Arya Roshanian
Get Even More From Bustle — Sign Up For The Newsletter