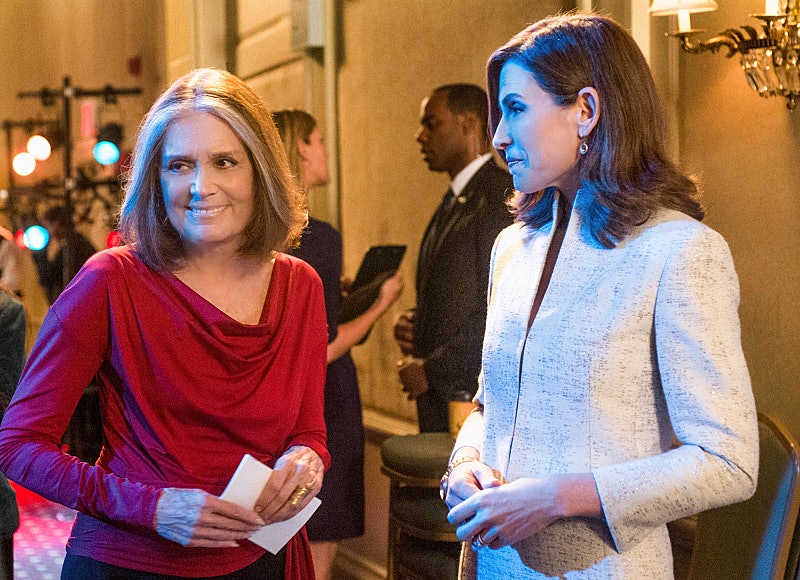 On Sunday night, political activist and feminist icon Gloria Steinem made a guest appearance on The Good Wife — and she may have finally been able to convince Alicia Florrick to run for state's attorney. Ever since Season 6 began, Eli Gold, Peter Florrick's trusted political advisor, has been hounding Alicia to hit the campaign trail — but until the very end of this week's episode, "Dear God," she just wouldn't budge. So, how was Steinem able to potentially change Alicia's mind? And did Eli put Steinem up to this?

Beyond the fact that she's Gloria freakin' Steinem, a woman who Alicia obviously looks up to and admires very much, I think she was able to change Alicia's mind because she approached the idea of running for state's attorney in an entirely different way. Instead of focusing on Alicia's chances at winning, which has basically been Eli's strategy for the past couple of weeks, Steinem asked Alicia a simple question that she'd never really been asked before: "Would you do a good job?" Caught off guard, Alicia initially brushed the question off, but as Steinem continued to speak, you could see the cogs beginning to turn in her head:

If you could do a good job, you should run. People respect you and you could make a difference. We need more good women to run.

Alicia knows that she's well-liked by the general public and could potentially win if she decided to throw her hat into the ring — Eli tells her that kind of stuff all the time — but I think what she really needed was some internal motivation. Alicia didn't want to run for state's attorney to please other people — she needed to find a reason to do it for herself. Excelling at work has always been important to Alicia, and Steinem presented running for state's attorney has an opportunity for professional growth. That resonated with her. Also, I think that somewhere beneath her cool, level-headed, and logical exterior, there's an idealistic part of Alicia that's secretly interested in doing things like "making a difference."

Yes, it certainly seems as though Steinem's words of encouragement (in addition to some inflammatory remarks made by the current state's attorney, James Castro) may have convinced Alicia to run. At the end of the episode, Alicia stopped by Eli's office and shut the door before cautiously asking, "If I ran... what's the plan?" The camera didn't show us Eli's reaction, but I imagine that he was elated.

Now, I have to ask: Did Eli put Steinem up to this? Probably. After all, last week, he was somehow able to convince Valerie Jarrett, Senior Advisor to President Obama, to give Alicia a pep talk over the phone. It didn't work, of course, but this time, Eli may have finally gotten it right.