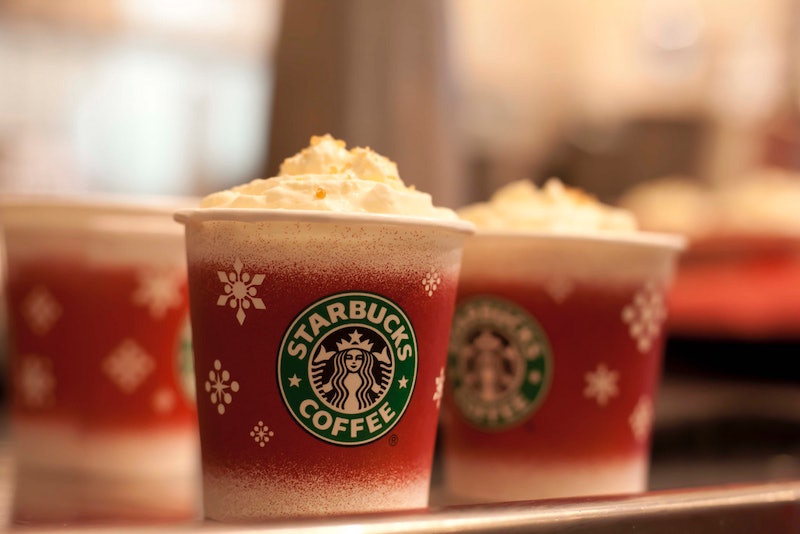 In the great battle of the seasonal beverages, a fierce war wages between those who fight in the Pumpkin Spice Latte camp and those who don’t. If you fall into the latter group, this one’s for you: Here are all the reasons the Peppermint Mocha is way better than the Pumpkin Spice Latte. Don’t get me wrong — I love me a good PSL as much as the next coffee-obsessed gal. But even during this pumpkin-saturated time of year, they get a little old after a while. So let’s give a little love to the PSL’s competitor, shall we?

Not that the Peppermint Mocha is by any means neglected; on the contrary, it’s almost as popular as its cinnamon and nutmeg-scented counterpart, especially during the December holidays and New Years’. If, however, you don’t really understand the love the Pumpkin Spice Latte gets each fall (or if you’re just really, really over it by now), here you go. From the festive red cups to some of the other… shall we say, less obvious pros, the Peppermint Mocha definitely wins the battle this time.

According to Nadia Singer at Quora, who used to sling espresso with the best of them, the Peppermint Mocha isn’t just a seasonal drink anymore. You can get one whenever you want it, even if it’s the middle of summer. Win!

2. They taste as good iced as they do hot.

Although BuzzFeed’s resident coffee expert actually preferred the Pumpkin Spice Latte iced to hot, the idea of a cold PSL fundamentally weirds me out. An iced Peppermint Mocha, however? Let’s just say that iced coffee, chocolate milk, and cool peppermint is one of the world’s greatest flavor combinations.

3. They’re not as played out as the Pumpkin Spice Latte.

I love pumpkin and pumpkin spice-flavored things… but even I’m starting to get a little pumpkin’d out right now, and it’s only the beginning of October. The Peppermint Mocha offers a welcome change from the madness

4. They come in a less-bad-for-you variety.

I kind of dislike the name “skinny” when it comes to food items, but given the fact that most espresso drinks are absolutely horrible for you, it’s nice to know that there are slightly less awful options available. The Skinny Peppermint Mocha cuts down considerably on calories and sugar, clocking in at 130 and 13 grams respectively in a 12-ounce Grande size. Sure, it’s still not great — but a Grande PSL, which doesn’t come in skinny form, has 380 calories and a whopping 49 grams of sugar. Yikes.

The spirit of the winter holidays, distilled into a paper cup.

If you’re feeling fancy, you can give The Ktchn’s slightly more elaborate DIY Peppermint Mocha recipe a shot — but if you’re feeling lazy, making one is as simple as tossing some chocolate milk in your coffee and popping a candy cane in as a stirring stick. Easy-peasy, no flavored syrups or steamed milk required!

7. You can actually taste the coffee in them.

That’s the beauty of mocha — it’s not just chocolate, it’s coffee and chocolate. While the PSL, as delicious as it is, doesn’t really taste much like coffee by the time all the other stuff is mixed into it, the Peppermint Mocha maintains at least a touch of its base flavor. Excellent news for people who just love the way coffee tastes.

8. They go with everything.

Cookies, brownies, scones, biscuits, muffins… whatever baked good you can imagine, the Peppermint Mocha is the perfect accompaniment. You deserve a break today.

9. Making them into “adult beverages” is a breeze.

10. They make you feel all warm and fuzzy inside.

Maybe it’s that whole “holiday cheer” thing. I don’t know. But whatever it is, it’s magical.

11. It’s easier to dress like a Peppermint Mocha than a Pumpkin Spice Latte.

Sure, there are plenty of cute PSL-themed outfits out there… but orange can be a tricky color to pull off. The Peppermint Mocha, on the other hand? Much more universally flattering, whether you go with red, white, and brown; green, white, and brown; red, white, and green; or just red and white or green and white. Take your pick between cool and warm tones, and you’re good to go!

12. The Peppermint Mocha has had fanfic written about it.

And not just any old fanfic — Twilight fanfic. As far as I know, the PSL has not yet received this dubious honor. Coincidence?

More like this
Dunkin’s Pumpkin Spice Latte Is Officially Back This Week
By Mia Mercado
The 8 Best Chew Bones For Puppies, According To A Vet
By Andrea Hannah
Lotus Biscoff Does A Biscuit-Chocolate Hybrid Now
By El Hunt
The 4 Best Blenders For Acai Bowls
By Ileana Morales Valentine
Get Even More From Bustle — Sign Up For The Newsletter