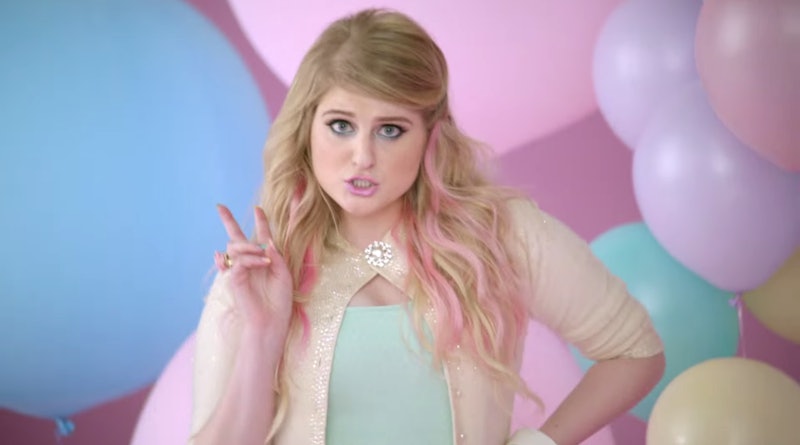 Meghan Trainor took the world, and the Internet, by storm when "All About the Bass" became a mega-hit. Featuring a call back to doo-wop, colorful outfits, and a hint of skinny shaming, "All About the Bass" went on to top the Billboard charts. Of course, with the success of such a song, all eyes are now on Trainor to ensure that she's no one-hit wonder by coming out with a debut album full of awesome songs. I mean, honestly, when is Trainor's debut album coming out? What is it called? How much of my money will I be shelling out for it when it gets here? Inquiring minds need to know.

Sadly, there isn't much information available on Trainor's album yet. She's released a few EPs so far, but "All About the Bass" is still the song that she's best known for. She's keeping pretty tight-lipped on what she's been working on besides her EPs, but luckily she's let a few nuggets of information drop about her upcoming album that should make all of her fans really, really excited to get their hands on it. Here is everything that we know about Trainor's debut album so far.

1. She's working with the producer of "All About the Bass".

Trainor has been upfront about the fact that she's working with producer Kevin Kadish on her entire debut album. After all, "All About the Bass" is her best-selling song so far. Why mess with a winning formula?

Trainor revealed that John Legend had collaborated with her on a song that she was originally going to cut from the album: "I wrote the song like years ago and it wasn’t going to make my album but... I produced a version with my friend and they sent it to John because he’s on my management company and he’s like ‘I love this I want to be a part of it’."

Sadly, Trainor hasn't even breathed a hint as to when her debut album might be coming out. It's coming, but we don't know when. And if she knows, then she's keeping it a secret. And this is tooooorture.

4. But the album is pretty much done.

However, in a September interview with Billboard, Trainor revealed that the album is finished except for "one more song to wrap up". And surely in the last month, that song must have been wrapped up by now? At this point, Trainor's debut album is probably a matter of deciding how best to advertise it and what release date will give it the best chance of zooming to the top of the charts. Until then, all we can do is wait.

More like this
The Jonas Brothers' New Album Has A Very Meta Name
By Alyssa Lapid
Meghan Trainor & Daryl Sabara Are Expecting Their Second Baby
By Jake Viswanath
Austin Butler Recalls Lisa Marie Presley Showing Him Elvis’ Bedroom
By Jake Viswanath
Linda Ronstadt’s “Long Long Time” Plays A Pivotal Role In The Last Of Us
By Brad Witter
Get Even More From Bustle — Sign Up For The Newsletter
From hair trends to relationship advice, our daily newsletter has everything you need to sound like a person who’s on TikTok, even if you aren’t.