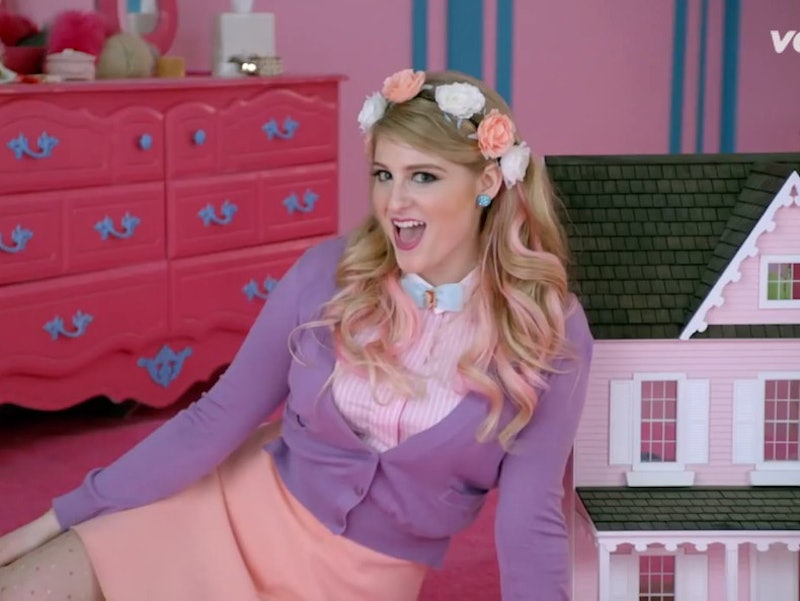 It seems like "All About That Bass" isn't going anywhere anytime soon. The catchy, body-positive single (well, mostly body-positive) is ruling the musical charts, thanks to a super smart 20-year-old. Yup, Meghan Trainor's success is definitely well deserved. And as she proved with her "Shake It Off" cover, she really can sing. If that left you craving more, don't fret! She's got even more music for you to enjoy. Meghan Trainor's album isn't out yet, but her EP called Title came out Sept. 9 and features "All About That Bass" plus three more tracks.

Of course, there's a bit of pressure on Trainor to produce a great full-fledged album. With the success of her first song, everyone's expecting more mega-hits, right? In an August interview with Idolator, Trainor said she doesn't want to be a one-hit wonder. Explaining her goal for her album, she said,

The big point we’re trying to get across is that [I'm] so diverse, and [I'm] an artist. "She’s not a one hit wonder!" It’s doing so well, but it’s almost scary. Like, "Can she follow it?" I think my other songs are better... They’re all anthem-y. All of them have that feel. Lyrically, there’s nothing like you’ve ever heard, which is very cool. It’s awesome.

Yup, that totally makes sense, but I don't think she has to worry. According to Bustle writer Kelly Schremph, one of Trainor's other tracks "Dear Future Husband" has an awesome feminist vibe.

In addition to the Title EP, Trainor has released two other albums, both in 2011, called I'll Sing with You and Only 17. Both albums are available for your listening pleasure on her Myspace page.

As for when that full album will be coming out, there's no word yet. For now, Trainor's EP is available on her YouTube VEVO page, but I'd highly recommend just buying the whole album on iTunes. It's inexpensive (a little more than $5), and surely will hold us over until she releases more music — which hopefully will be in the near, near future.