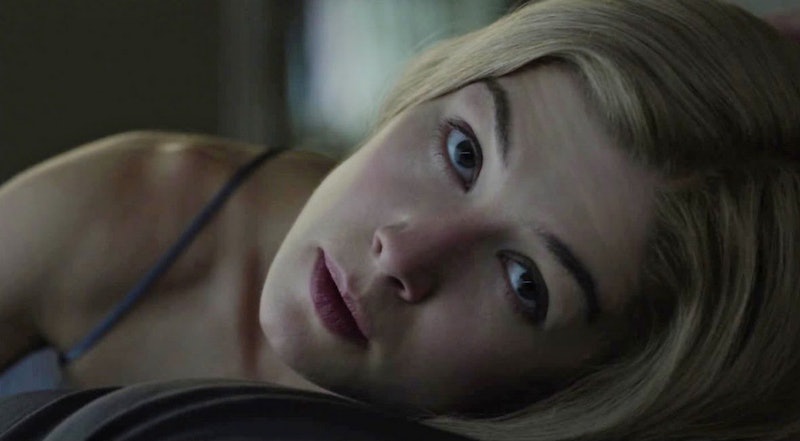 There's no doubt that David Fincher is a successful director. Oscar nominations, Emmy nominations, an incredibly buzzy adaptation of Gone Girl in theaters now and inciting all kinds of discussions — dude's doing pretty well for himself. But what can get lost in the buzz surrounding narratives like Gone Girl — films that bring up a lot of societal and gender-based baggage, and rightfully so — is the craft that goes into every Fincher movie. As Tony Zhou states in a new video exploring Fincher's auteurism, "even if you don't like Fincher, this is some of the best craft in directing right now, and it is absolutely worth studying."

Zhou's popped into my radar before, with a great video about how we portray technology onscreen in works like The Fault In Our Stars, House Of Cards, and Sherlock . Now he's taking a deep dive into what's made Fincher's work so dynamic and unique. If you were looking for an excuse to geek out about film today, this is it.

David Fincher? He cares about information. Unlike many filmmakers, who try to avoid exposition, sometimes Fincher does nothing but. In his world, drama happens when a character learns a new piece of information. How does it fit with everything they already know? And how do they react to learning a little bit more of the truth? Fincher's style is an extension of this idea, and it's interesting to hear him describe his process: 'They know you can do anything, so the question is, what don't you do — not what do you do.'

Things he doesn't do include overuse of handheld camerawork, personhood infused in that camerawork, an abundance of close-ups.

All of this affects what you get in the end: An ominous sense, a strategic use of closeups that leads to his distinctive distancing — when he does choose to cut into a closeup, you know it's crucial. "These moments gain power precisely because he withholds the shot elsewhere." These are all particularly interesting when applied to Gone Girl, which (cinematography spoiler alert?) both starts and ends with a close-up, and which employs all of these habits.

Watch Zhou's analysis for yourself; the example's and Zhou's own exposition are well worth your time.