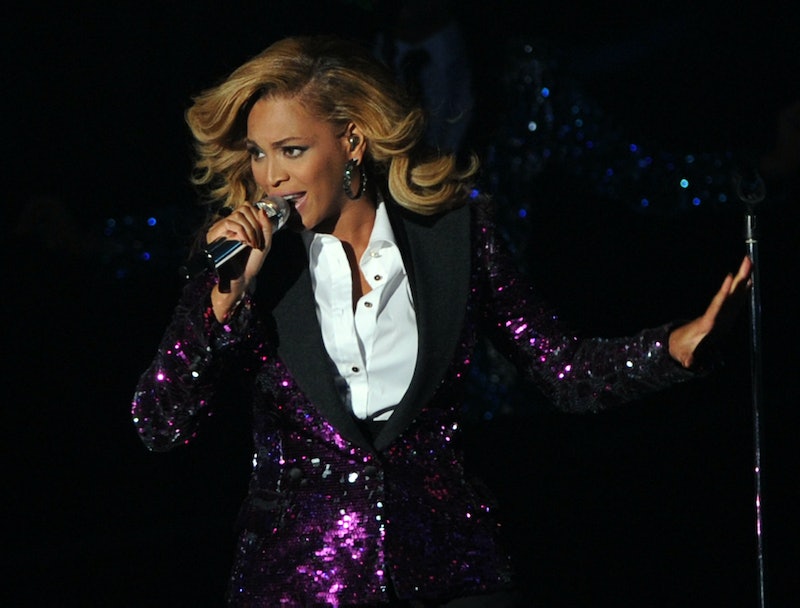 Celebrities are having way too much fun making pregnancy announcements these days. Whether we’re scrolling through our favorite celeb's photo-filtered life on Instagram or maybe just watching an awards show, celebs are pulling out all the stops to let us know that they’re expecting. Granted, it’s big news to celebrate. There’s going to be a mini version of your gorgeous self growing inside you. Someday you’ll hear the pitter-patter of tiny feet running around the movie set as you act in a scene. Maybe, you’ll even take your baby to your fashion shows, where he or she can have the best seat in the house — front lap and center, right near Anna Wintour — right, North West? Or maybe you’ll showcase you baby’s home videos during your arena concert tour à la Blue Ivy.

Regardless of their own career, I can see why celebrities might want to tell the world they're expecting in a cute way, and we as the public have begun to expect it. We’re beyond hearing official statements from a celebrity's PR team. We expect more personal means, be it a celeb's Instagram account, Twitter quip, or video. Whatever ways they decide to tell us, we’re listening.

But if some not-in-the-know famous folks need a few suggestions, here are some options to choose from when selecting the perfect way to announce your celebrity pregnancy.

The Photoshoot on Your Lifestyle Site

Lively stunned us all by posting a pic of her pregnant belly on her website Preserve. After looking through a fall-themed Pinterest-worthy photo spread, Lively squeezed in a photo of her pregnant self at the tail end, much to our surprise.

Con: Time it takes to setup a lifestyle website

I don’t expect any thing else from supermodel Coco Rocha who announced her pregnancy with husband James Conran via a mildly uneasy video. I say "mildy" and "uneasy" because it’s the only way to describe a video with creepy music box audio as cameras take a 360 degree look at someone in a flesh-colored leotard, before words pop up to share their happy news.

Con: Where do you get the 360 degree camera that was needed to set this up?

While I still think that Stacy Keibler stole this from that viral video where a couple put a bun in the oven at the soon-to-be-grandma's house, I appreciate the simplicity of her announcement of her and Jared Pobre’s first child.

Con: Could be misconstrued that you’re really wasting oven energy to heat one lone bread bun

Not only does Fergie win for the #mylovelybabybump hashtag under this announcement photo, but she and husband Josh Duhamel get points for photoshopping baby pics of themselves to announce that they were expecting. They're pretty cute.

Con: Digging through boxes of family photos, seeing that most of them are of you naked in a sink during bath time

The Concert Announcement from Your Boo

Kanye West dropped the news of Kim Kardashian's pregnancy to an entire concert full of his fans in Atlantic City. Apparently, Kardashian didn't know he was going to do it when he sang the lines, "God brought us a whole new plan, baby. 'Cause now you're having my baby," then West made everyone make noise for his baby mama, Kim. This is pretty sweet as far as concert announcements, and also draws attention to the fac that he's one of the few people I will excuse for rhyming baby with baby.

Con: Wait. I wanted to tell people. I'm the one who's pregnant.

Who needs Instagram when you can have an actual stage to show everyone you're practically glowing with life inside you? Such was the case at the 2011 MTV's Video Music Awards, when Queen Bey ended her performance with a very significant belly rub.

Pro: Everyone knows now! That saves time on brunch with the in-laws.