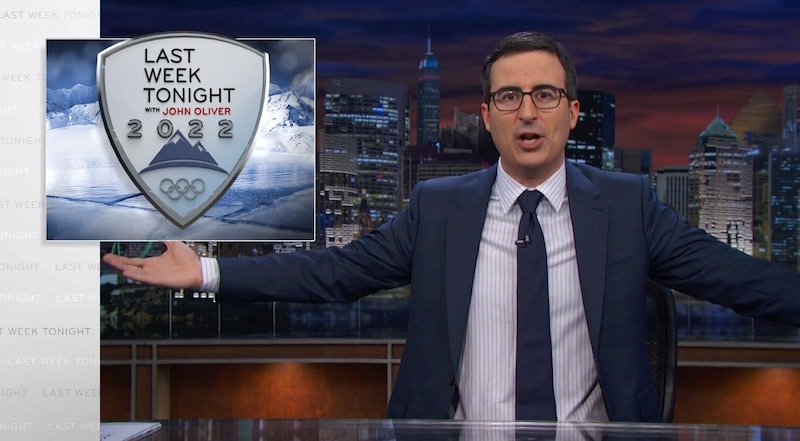 If you're an Olympic junkie, you may have heard that the International Olympic Committee (IOC) is having a little trouble with the 2022 Winter Olympics. Specifically, they're running perilously low on options for host cities, and those that remain are somewhat south of ideal. But luckily, there's a big-shot HBO host who has the perfect solution in mind: just turn the damn thing over to him. That's right, it's John Oliver's bid to host the 2022 Winter Olympics.

In a segment that's equal parts hilarious and harrowing for anyone who loves the games, Oliver pitched his own studio as the last, best resort. When you see what he's up against, though, the suggestion doesn't seem quite as wild. The IOC had been actively engaged with Norway for months about hosting the 2022 games in Oslo, but a vote by the country's leading conservative party, according to the AP, derailed the chances of that last Wednesday.

This is a curious inversion of how the search for a host city is usually perceived, with various places lobbying to receive the high-profile, high-cost responsibility. In Finland, it was reportedly quite the contrary, with the breakdown being blamed on the IOC's arrogant attitude, and the nature of their demands on their host.

As Oliver observed, these places are... sub-optimal for a Winter Olympics, to say the least.

And the problem is, neither China nor Kazakhstan are appealing alternatives. Both have appalling human rights records, Beijing doesn't even have a mountain suitable for skiing within 50 miles of it, and if they have it in Kazakhstan, we're all going to have to listen to two weeks of Borat impressions from America's foremost douchebags.

Incidentally, Kazakhstan's bid to net the 2022 games is actually a second go-around — they first tried to win the 2014 hosting gig which eventually went to Sochi, another place it might've been better the IOC not agree to.

"The Olympics No One Seems to Want"

That's how NBC News' Brian Williams described the plight of the hitherto homeless Winter games, before doing his very best to rally some enthusiasm.

Wherever it is, they'll be televised by NBC.

Oliver had a certain admiration for Williams' nonchalant attitude.

You genuinely get the sense, if they'd just widened the shot just slightly, you'd have seen Brian Williams making the jerk-off hand motion. "Yeah, whatever it is, it'll be televised on NBC. What am I doing here? Get me out of this place."

So, why did Norway back out of the Olympic spirit? It turns out it may have had to do with the list of demands the IOC has for its prospective host cities and nations. There's a whole lot of them, as Oliver recounted — 7,000 pages of demands, some of which are the kinds of things that wouldn't necessarily be irritating to ask for, but sure are to demand. Oliver gave some examples:

Norway's conclusion? Ehhhhh, no thanks.

Luckily, John Oliver Can Provide All These Things. Like Minibars!

There's even Fresca in there! The soda that tastes like a grapefruit took a sh*t in your mouth!

Here you go. Look at her! She hates you, and you'd barely know!

And "Exactly as Many Ski Mountains as the Entire City of Beijing!"

And, of Course, You'd Get to Meet the King

Finally, Oliver spoke what were probably the truest words of the night.

So, are you listening, IOC?

You can watch the full video here.