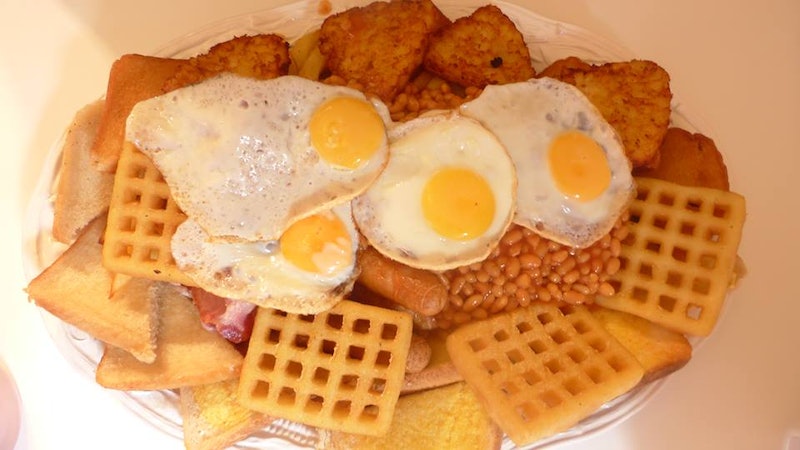 In case you were wondering what 8,000 calories looks like, the Bear Grills Cafe in Congelton, a town south of Manchester, UK that sounds fittingly like a heart condition, has you covered with The Hibernator. They're calling it a "meal", but it could be more aptly described as "heart attack on a plate". I'm not going to lie: I would eat this. Or rather, I would attempt to eat this. The gargantuan meal is essentially an English breakfast put under a multiplying ray times infinity – it includes four fried eggs and a four-egg cheese omelet, eight sausages, eight pieces of bacon, four pieces of toast, four waffles, four pieces of fried bread, four black puddings, mushrooms, baked beans, tomatoes, four hash brown patties and some french fries. Oh, and it comes with a 32-ounce milkshake because of course it does. And you thought England was all refinery and cucumber sandwiches with the crust cut off, delicately washed down with tea or a fruity Pimms and a rogue pinky finger wagging through the air. As it turns out, British people are just as disgusting as the rest of us.

The Hibernator is Bear Grills Cafe's main attraction, and owner Mark Winder is challenging patrons to finish it. The Hibernator is worth £19.95, but will win you a cool £100 if you can pig it down. As of writing, no one has successfully completed the challenge, although 22 people have allegedly tried. The more I look at images of The Hibernator though, the more I think I could be that person. The more I WANT to be that person. The chosen one. I mean, who hasn't ever fantasized about eating a bucket of breakfast food? It is the best kind of food, after all.

Winder has been quoted as saying in Metro UK that, "Younger guys come in, and it is all men who have tried the challenge, and they look at the ingredients up on the board and say: "I am going to smash that." But then they see it come out on the big platter all heaped high and start to cry on the phone to their friends. They give up after about twenty minutes." If you're not currently booking your flight to the UK to show these pasty English people how real Americans eat, then maybe this photo of Winder with the uncooked meal will entice you:

Meanwhile, you can watch a video of this skinny Brit trying to eat the ginormous meal below. He gives up after 25 minutes (which is impressive to Winder) although the hardest part to watch is not his sweaty, flushed pink cheeks and nauseous expression, but the chef throwing away the left overs. And by left overs, we mean at least 5 more good meals. As the gluttonous Western world refuses to learn, most exercises in excess end in total waste.