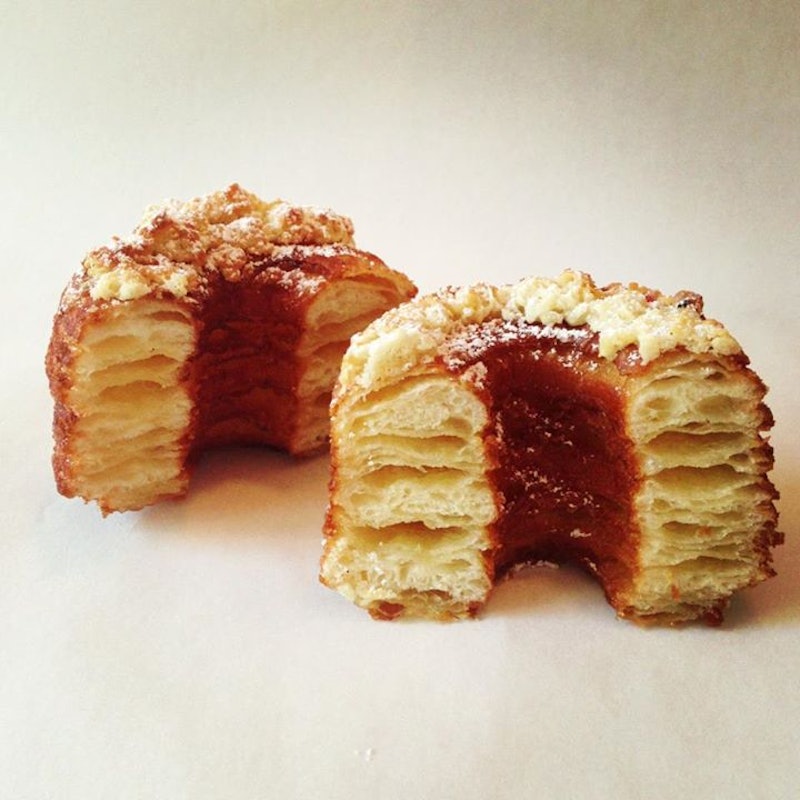 If you’ve ever wanted to make your own cronuts, but haven’t been terribly impressed with most of the DIY recipes out there, good news: There’s an official cronut recipe from Dominique Ansel himself — and he’s decided to share it with the world for free. Cronut lovers of the world, rejoice!... Although you also might want to brace yourselves, because it’s definitely not a project for faint of heart.

In honor of his upcoming cookbook release, Dominique Ansel: The Secret Recipes , the man behind the hybrid pastry craze gave Good Morning America a sneak peek at one of the book’s most hotly anticipated recipes. The ingredients for the cronut dough itself aren’t too outlandish; if you do any sort of baking or cooking, you’ll probably have most of it in your pantry already: Flour, Kosher salt, granulated sugar, instant yeast, egg white, unsalted butter, heavy cream, and a little bit of cold water. It gets a little more complicated when you start looking at the equipment list — for example, you’ll definitely need a KitchenAid or other stand mixer with both a dough hook and a whisk attachment, a three-and-a-half-inch ring cutter, a 1-inch ring cutter, a couple of piping bags, some specific piping tips, a deep-frying thermometer, a large offset spatula, and (a little weirdly, I think) a ruler. And when you get to the filling? Hoo boy. Cronuts are filled with ganache, and, well… if you’ve never made ganache, it’s a bit of a doozy. I don’t know about you, but I definitely don’t keep, say, gelatin sheets or rosewater around my kitchen regularly.

But all that is nothing compared to the process of actually baking the things: The recipe takes fully three days from start to finish. Day one consists of making the ganache, the dough, and the butter block; on day two, you “laminate” the dough with butter (and no, it’s nothing like running a piece of paper through a laminating machine); and on day three, you finally cut the pastries, fry them, make the glaze and flavored sugar to top them, fill them with ganache, stick the glaze and flavored sugar you previously made on top of them, and serve them. Oh, also, you have to eat them within eight hours of frying them. So, y’know, don’t plan on having any leftovers.

I love to bake — but to be honest, this is way more complicated than I usually like my pastries. As Grub Street notes, “Maybe all those people waiting on the line are onto something.” think I’ll stick with the Pilsbury Grands DIY version; if, however, you’re feeling a tiny bit more ambitious than I am, you can snag the full, official cronut recipe over at ABC’s website. Dominique Ansel: The Secret Recipes hits bookstores on October 28.