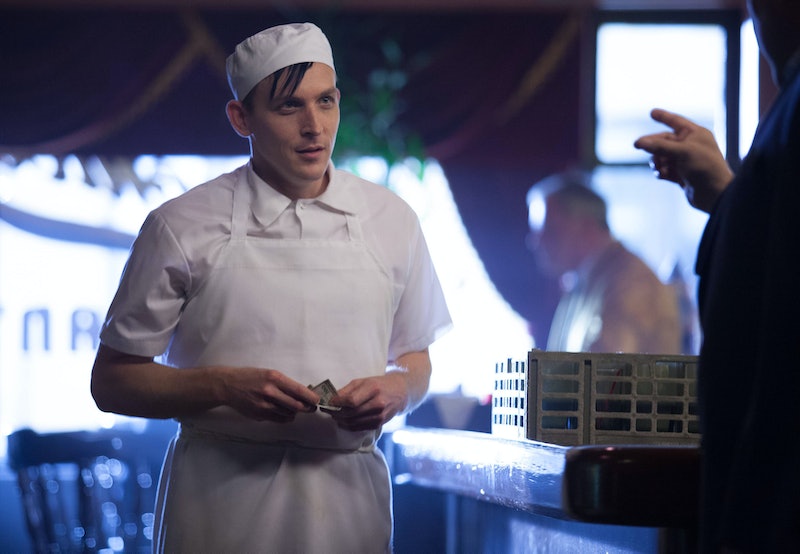 We all know that the seemingly-frail killer Oswald Cobblepot will grow up to be the Penguin on Gotham , one of Batman's greatest foes, but I don't think any of us were expecting how he returned to Gotham during Monday's episode. Jim Gordon pretended to kill Penguin in the pilot, firing a gun by his head and throwing him into the river with the warning to never come back to Gotham. In the last few minutes of Monday's episode, Barbara Kean answers the door and reveals to Jim and to the audience that Oswald Cobblepot is standing there, dressed to the nines and smirking. So what does the Penguin want from Jim Gordon?

Oswald was back in Gotham for the entirety of the episode, even having to shake off and kill a petty crook who caught him and was going to turn him in to Fish Mooney. However, it wasn't until the end that he revealed himself to Jim. What changed? Penguin had a stroke of good fortune. After murdering his way into a job as a busboy at a restaurant, he got on the good side of mafia boss Salvatore Maroni. Seeing himself in "Paolo," Maroni gave Penguin an ample tip to keep him quiet about the conversation he had overheard and they parted ways smiling.

My best guess at this point is that Penguin bargained with Maroni for a better life for himself. After all, he has insider knowledge of Fish Mooney's operation, which cops in the GCPD are the most corrupt, and much more. He might have given Maroni an ace in the hole by telling him exactly how deep Fish's betrayal of Falcone runs, giving Maroni the fuel he needs to set Falcone and Fish at each other's throats so he can seize power for himself in the confusion. If Penguin played his cards right, then he might just have talked his way into a high position in the Maroni family.

However, snitching is what got him in trouble in the first place. Sure, you can argue that it was snitching to the cops that proved to be the Penguin's downfall, but the mafia isn't exactly well-known for its love of people who can't keep their mouths shut. Maroni might be keeping Penguin around for as long as he is useful, but keeping someone like him close enough to have insider knowledge on the Maroni family operations isn't a smart plan. Penguin is playing a dangerous game here.

As for what he wants with Jim Gordon, well, Jim helped him fake his death even though it meant risking his own life if anyone found out. Penguin has Jim in his pocket now. No matter how many people might be looking for Penguin's head on a platter, the mere whisper that he is alive would make those same people gun for Jim twice as hard. It's mutually assured destruction on Gotham now, and just a matter of which one of them is going to call the other's bluff first.