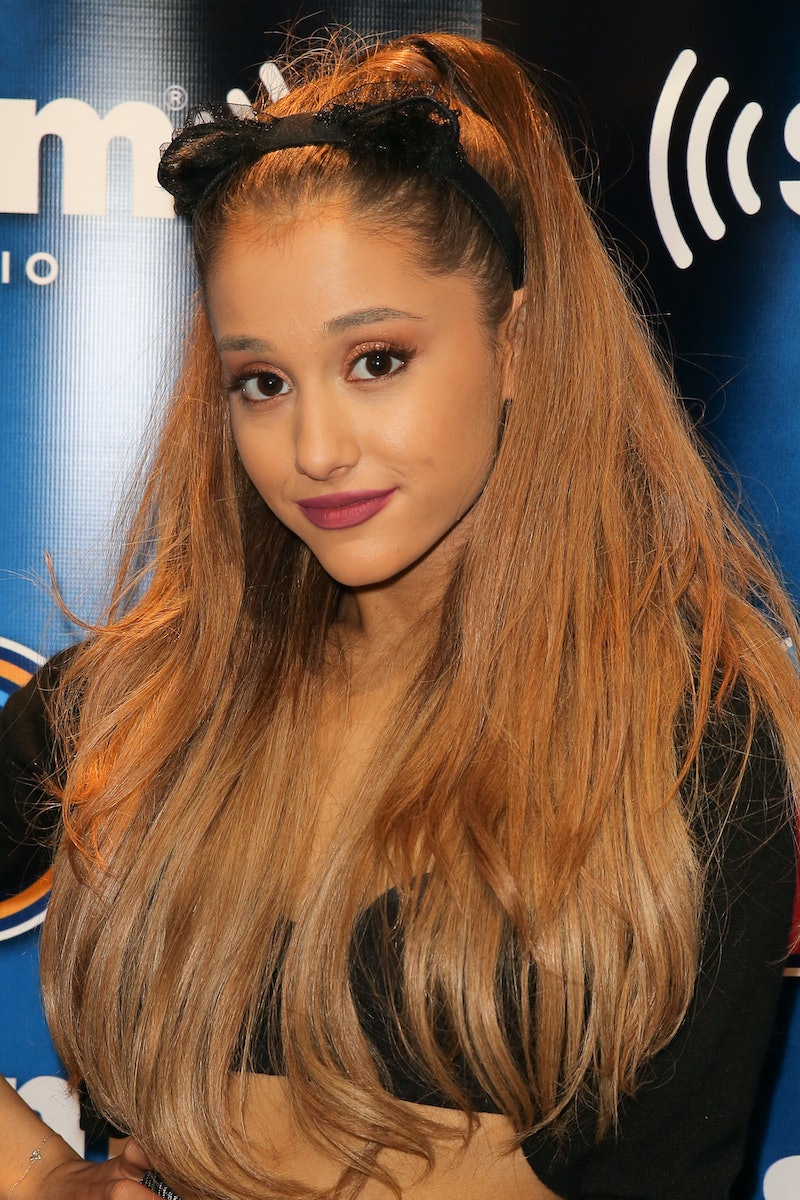 A picture's worth a thousand words. Isn't that how the story goes? After all this time that we've spent wondering if Ariana Grande and Big Sean are dating, combing over their interviews, listening to their collaborations, side-eyeing them every time they refused to comment on that, we now have proof. Maybe. Kind of. No, I'm not talking about the shadowy photo Grande posted to her Instagram that may-or-may not have been of her and Big Sean. Instead, it's something a little more damning. It looks like Grande and Big Sean were caught kissing at an amusement park in Universal Studios. Explain that.

The photograph was taken atop the Revenge of the Mummy roller coaster and even appears to be blown up on one of those gift shop posters that usually accompany massive rides like that. While everyone around them is busy screaming at what I can only assume is about to be a steep drop, Grande and Big Sean are leaning into each other and kissing like they just don't care who sees. And the most telling evidence of all? She's even managed to be photographed from her left side in this snap shot, just like every other picture ever taken of her ever. Hmmm.

But is that really them? I know, I know, I know. "Come on, Kadeen! If it looks like a duck and walks like a duck, then it's probably a duck!" But I wouldn't be a good journalist without a heavy dose of skepticism, now would I? The thing is, you can't see the defining features of Grande and Big Sean's faces at all. Sure, the female in the picture is wearing her hair in the same way that Grande was depicted as wearing it in her last Instagram photo with brother Frankie — on a date that corresponds with the Saturday on which this amusement park picture was said to have been taken — but is that really the be-all end-all of evidence? And how do we know that's really Big Sean?

Even more suspiciously, Grande and Big Sean are the only ones making out in a picture of people who are otherwise screaming. When's the last time you went crashing down a roller coaster and felt the need to make out with your boyfriend right as it was happening? Surely they had to know there was a camera about to take their picture. You might argue that this is precisely why they decided to kiss, so they'd have a good picture to take home from their day, but with how coy and private they've been about their relationship so far then it just makes no sense that they'd suddenly give it all up for a gift shop picture. They had to know the media would get their hands on any pictures taken more publicly than on one of their phones, right? RIGHT?

I've already been assuming that Grande and Big Sean are dating, so this new photograph doesn't really change my opinion either way. It's just bizarre to see them smooching openly in public when I've gotten used to their use of "No comment" and their insistence on public displays of affection no more intimate than friendly hand-holding. I've been hoping for proof just as much as anyone, but I wasn't expecting it to be this clear or this quick.