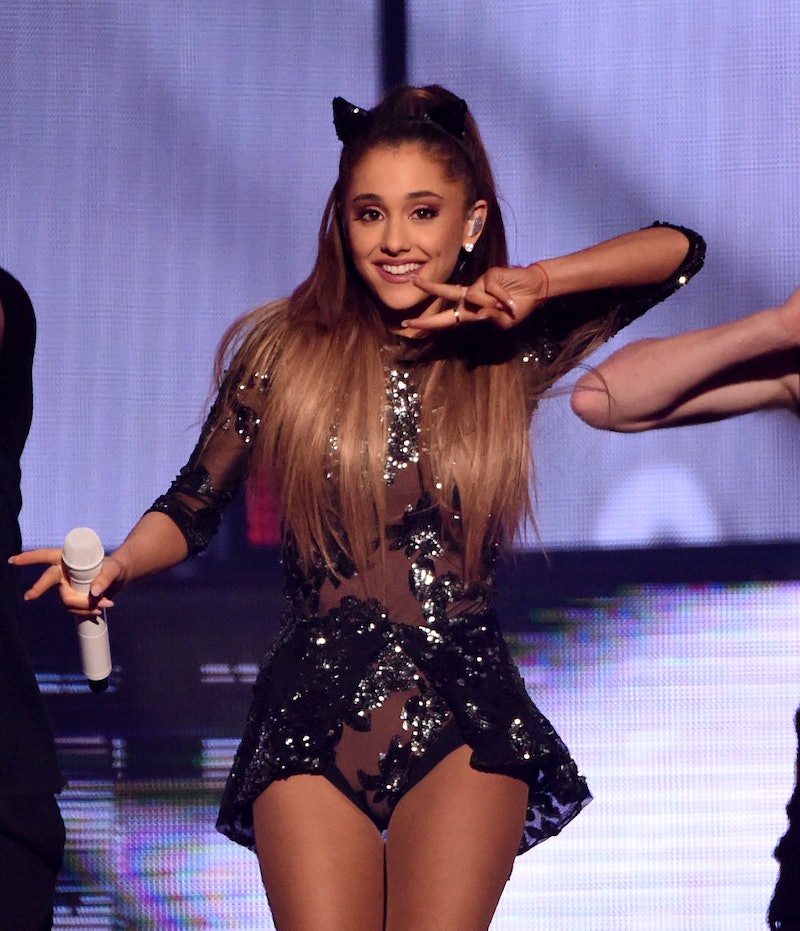 The only question more pressing than whether Ariana Grande is a diva is whether or not she's actually dating Big Sean. Are they together or aren't they? It's like they're messing with the public by choosing to throw a ton of hints our way, but never confirming it. Despite playing coy — like when she refused to answer Ryan Seacrest's question — and posting super cryptic Instagrams, it looks like we finally have an answer. On Monday night, Ariana Grande favorited Big Sean's tweet. I know what you're thinking: Who cares, it's just a tweet? But it's a very telling tweet! He wrote: "I got a new chick that I gotta thank God for" and it got a favorite from Ari.

Maybe she thought she was being sneaky. After all, the tweet was favorited 9,300 times, so how would anyone know she hit that little star-shaped button too? Well, she can blame Twitter for blowing up her spot, because as I was scrolling through my feed last night, a tweet popped up on my timeline with "favorited by Ariana Grande" above it. I don't follow Big Sean (sorry, buddy!), but because I follow Grande, the message popped up. Oh, Twitter and its new TMI setup! It paid off in this case, huh?

In case you still don't believe me, you can see it just chillin' in her favorites section:

I know, I know. I'm quite a Nancy Drew. Sure, this isn't a definite confirmation, but why else would you favorite it if it wasn't about you? Yeah, that's what I thought. Unless he got a new pet chickadee, or baby bird, that she was super pumped about it. (Hey, she really does like animals, ya know!)

Anyway, here's the tweet, just in case you feel like scrolling through its 9,000 faves to find Grande's name:

While we're on the theme of photographic evidence, let's recap all the times the two were spotted holding hands, aka showing the world they're most definitely/probably more than friends:

Most recently, after her SNL performance

She could've had anyone at SNL with her, but chose Big Sean, so...

Backstage at the VMAs

Her face here says, "Yeah! We're holding hands. So what? He's mine!"

Look how enthusiastic she is here!

I'm going to have to agree with this Twitter user. Look at those interlocking fingers!

OK, I rest my case. I'm officially a believer in Big Grande or SeanRiana. As long as they get a better couple name... ASAP!