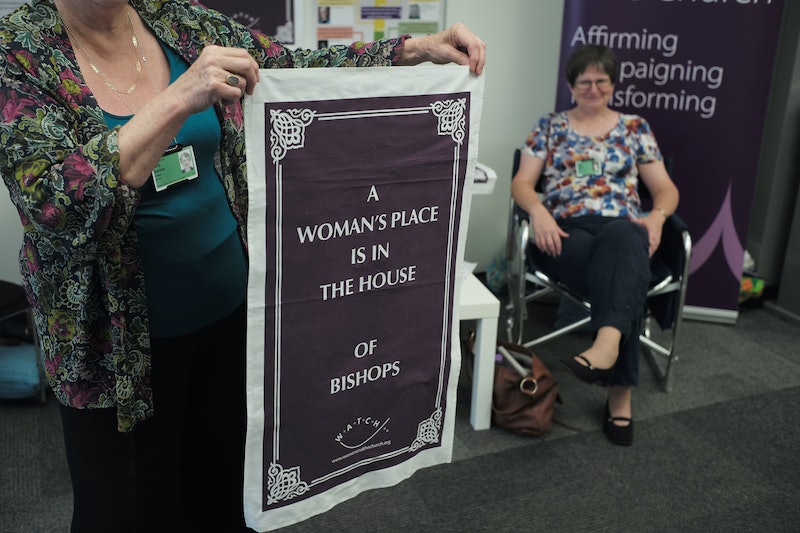 If you're ready to mix up your reality show diet, get ready for the punk rock preachers of TLC's new show Preaching Alabama . We're talking tattoos, ferocious beards straight out of your local hipster village, and women taking the pulpit, tradition be damned. The series stars the Speegle family, with Allen and Janice at its head as they establish the Movement Church in Alabama and pass over control of the ministry to their children. They are joined by daughters Jill and Lori and their husbands Rod and Seth, respectively. Jill is ready to bring her preaching stylings to the city of Madison, while Lori and Seth are the resident tatted and pierced contingent of the family, who might have a harder time being accepted as preachers.

Their church focuses on accepting all, including those who have been rejected by other congregations. "Jesus didn't reject people and we don't either," Allen said in an interview with local site AL.com. The Church's website is like a modern design dream with a simple yet straightforward look and cool fonts. One of the FAQs asks "How should I dress?" The answer: "Like you."

Whatever your religious views, the Speegles clearly have pretty good heads on their shoulders and great intentions at their core. Though they don't explicitly say it, their "all welcome" policy implies they are looking to establish the most diverse church in Alabama, and not turn away people due to orientation, race, or anything else. Their robust Facebook page features tons of community outreach from food drives to school donations, and an upcoming Halloween carnival. They also put a modern spin on some traditional teachings by churning out a ton of Tumblr-worthy inspirational quote images.

While their movement does seem pretty ambitious, what actual religion are the Speegles and their church? They are non-denominational Christians, which means they hail from a Protestant tradition, without actually adhering to any specific sect of Protestantism. It's a fairly homegrown American concept, though non-denominational Christians do exist throughout the world. It's a controversial status for some in the Christian world, who have brought up that abandoning the rites and rituals of denomination dilute the faith into "feel-good" moments versus a quest for salvation.

It's interesting to think about because the ideals behind non-denominational Christianity are wholly American in its populism — the triumph of groups of individuals to believe freely as they see fit, and the rooting of a community through people versus a state establishment or larger entity. It's probably not a coincidence that non-denomination thrived where there was never a state-sanctioned church.

So it's that freedom to believe as you will without an institution that makes non-denomination thrive in many parts of the country. The question is, can the Speegles' unique brand of Christianity survive in an area of the country so conservative we colloquially refer to it as the "Bible Belt"? Conservative Christian media is already torn. In probably the world's first instance of "unconditional love, tolerance" having sarcastic quotes around them, ChristianNews.net calls the Speegles "false preachers" and takes umbrage at the Family Feud sex question win that first brought them into the limelight, because apparently good and moral people aren't supposed to acknowledge that sex exists.

Not going to lie, I'm kind of rooting for Preaching Alabama to work out well. You don't have to be religious to appreciate the message of unity. If the Speegles can touch just a few people and create more acceptance, it'll be pretty great, especially for anyone who may be hiding part of their identity or staying away from their church for fear of an intolerant community.