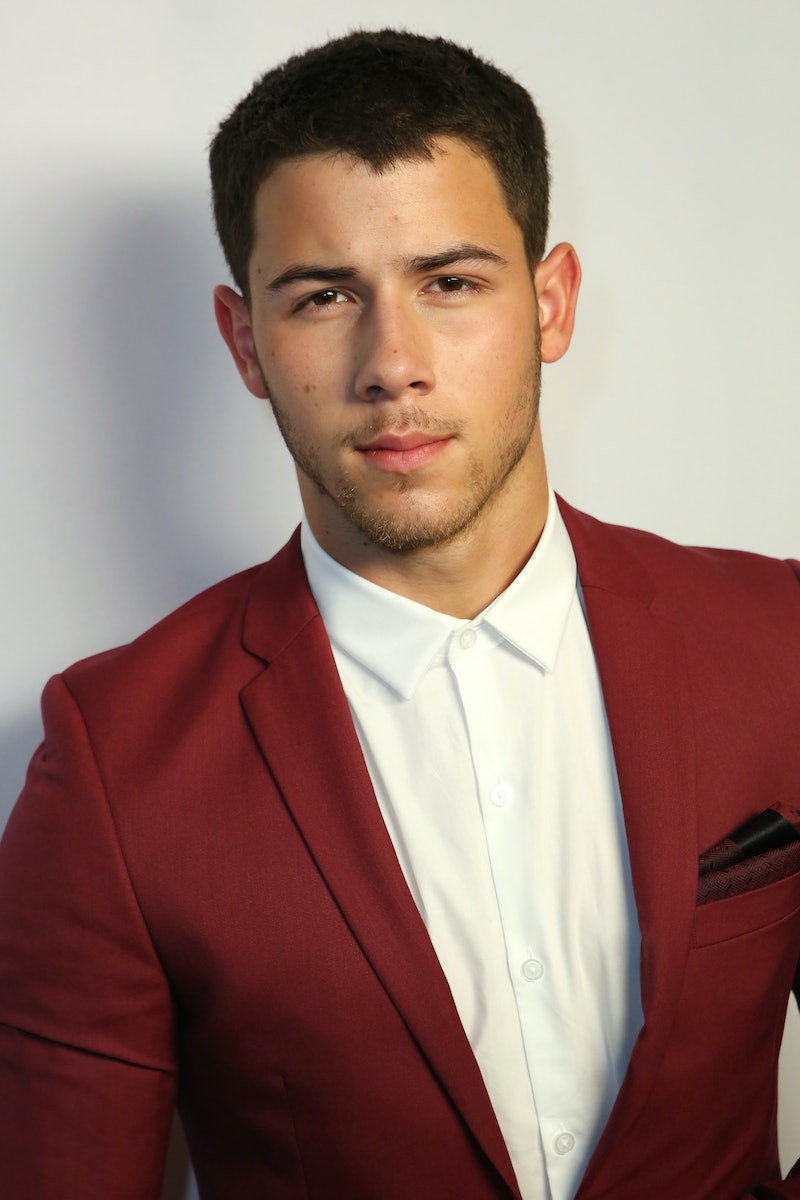 Are you ready? On Monday, Nick Jonas' new single "Numb" featuring rapper Angel Haze hit iTunes, and it definitively proves that we are now entering...the Jonaissance. I'm into it, and I hope that you're into it, too. If you're not, please immediately remove yourself from the premises and begin a quiet reflection on where you went wrong in life. I'm not trying to be rude, but I simply do not have time for your negativity or questionable taste, and I just can't have you harshing everybody else's mellow. (Just kidding....but seriously.)

Now, I will be the first to admit that Nick has not always been my favorite Jonas brother. In my younger, dumber years, I was partial to Joe — but I've seen the error of my ways. I mean, Joe is cool, and Kevin is...Kevin, but Nick just has that "X factor," that thing that immediately catches your eye. Could it be that he got really buff over the past several years and now seems to take every opportunity he can to flash his abs for the camera? I mean, yeah, that might have something to do with it — but there's more to the Jonaissance than just sexy shirtless pics! Well, I guess what I should say is that SOMETIMES there's more to the Jonaissance than just sexy shirtless pics!

Here are the reasons why it's clear that the Jonaissance is upon us:

First things first: "Numb" is great. True, the track pretty shamelessly jumps onto the "pop-trap" trend started by songs like Katy Perry's "Dark Horse," but it does it well. In fact, I would argue that it does it even better than Iggy Azalea's "Black Widow," for instance. Nick's vocals on the Backstreet Boys-esque chorus are sublime, and the breakdown will have you bopping your head in no time. If "Numb" is released as an official single at some point in the future, I think that it could become Nick's biggest solo hit to date. Speaking of solo hits...

"Jealous" Is Pretty Great, Too

OK, who saw this song coming? I know I didn't! After listening to "Jealous" just a couple of times, its infectious chorus wiggled it's way into my brain, and before I knew it, I was hooked. The song currently sits at No. 8 on the U.S. iTunes singles chart. How high will it climb? We'll just have to wait and see.

Nick is starring in a new DirecTV drama series called Kingdom that focuses on the lives of a bunch of mixed martial arts (MMA) fighters who are living and training in Venice, California. After telling Bravo's Andy Cohen in September that he does "a lot of nudity" on the show, Nick hinted that his character may also be struggling with his sexuality. OK, I'm starting to see how this could (emphasis on *could*) be an interesting, complex, and challenging role for Nick! Now, whether or not people will tune in to watch a drama series on DirecTV about MMA fighters, I can't say, but it sounds like Nick might actually have an opportunity to really show off his acting chops here — and that's fantastic.

Whether or not this was the best way to go about giving his career a jolt is certainly up for debate, but there's no denying that Nick's recent junk-grabbing antics in Flaunt magazine generated a lot of press. People who had no idea who Nick was just a few days ago are now using his picture as their desktop backgrounds and jamming out to "Jealous" during their lunch breaks. No doubt about it, Nick's star is definitely on the rise.

...What else can I say? Welcome to Jonaissance.