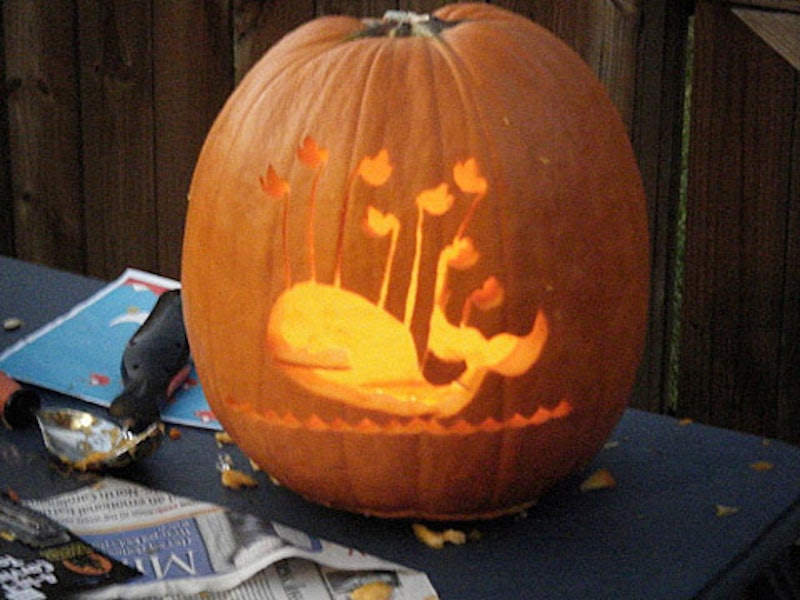 Fall is here, Halloween is around the corner, and the gourds are out — which means it's time for us to show off our expert pumpkin carving skills... or lack thereof. The truth is, few of us can claim to be master carvers when it comes to pumping out world-class jack-o'-lanterns, though that's certainly not for a lack of trying. We've all experienced our fair share of pumpkin fails, but some are inevitably more hilarious than others — look no further than these jack-o'-lanterns gone terribly, terribly wrong as proof.

We can't exactly give these ghoulish gourds an A for effort, but we will definitely give them a C for creativity, because while these pumpkins certainly aren't pretty, we can safely say they are... imaginative. The beautiful thing about pumpkin fails is that they come in all shapes, sizes, and costumes, and while most of the evidence usually ends up destroyed, we were able to get our hands on a few lucky shots that are, well, scary funny.

So whether you're looking for some pumpkin carving inspiration, or you're just looking for a good laugh, we've rounded up eight hilarious jack-o'-lantern attempts that are so bad, they're good. In either case, after looking at these Halloween mishaps, you'll definitely feel better about your own jack-o'-lantern creation. Happy carving!

1. The Pumpkin That Over-Accessorized

Pile on the feathers and the bling if you want, but it's not going to be enough to save this jack-o'-lantern gone awry. This pumpkin is definitely terrifying... just for all the wrong reasons.

2. The Man Who Failed his Best Friend Pumpkin

It's one thing to be a dog lover. It's an entirely different thing to carve your dog's face into a pumpkin and make him look like a zombie with an irregularly large tongue. Or is it a fox's tail? Hm. Now we may never know what the fox says.

The hair flip suggests this is an attempt at a Justin Bieber carving, but I'm a little thrown off by the football-shaped head, spiky teeth, and weirdly shapeless nose. On second thought, I can kind of see it now.

4. The Classic Baby in a Pumpkin Routine

Dear parents, don’t believe everything you see on Pinterest. For one, kids don’t like sitting in cold sticky stuff any more than you do. They tend to do this thing where they freak out and scream their heads off. #FailedIt.

5. The Pumpkin No One Can Figure Out

6. The Pumpkin That Shouldn't Be Worn As A Mask

As much as I would call this a fail at first sight, I can’t help but think it’s also slightly brilliant. First, let your child carve his or her own pumpkin. Then, let them wear it on their head as part of their costume. And if they get hungry while trick-or-treating, they can always eat the inside of the pumpkin. Fruit before dessert — now that’s responsible parenting. (I'm kidding, of course.)

7. The Pumpkin That Shouldn't Be A Tattoo

This guy just took pumpkin carving to a whole new level. Honestly, the only thing worse than this would be a pumpkin with herpes. Oh, wait a second…

8. The Pumpkin With Herpes

Let's just say... I wouldn’t use this pulp in grandma’s pie recipe.

More like this
26 Ghost Story Podcasts To Get You Ready For Halloween
By Jessica Booth, Mia Mercado, JR Thorpe and Emma Carey
15 Easy Pranks To Play This Halloween
By Emily Kelley and Lauren Grant
10 Stranger Things-Inspired Halloween Costumes For True Fans
By Emma Carey
10 Pumpkin Recipes That Are Way More Creative Than Pie & Lattes
By Rebecca Deczynski and Alexis Morillo
Get Even More From Bustle — Sign Up For The Newsletter