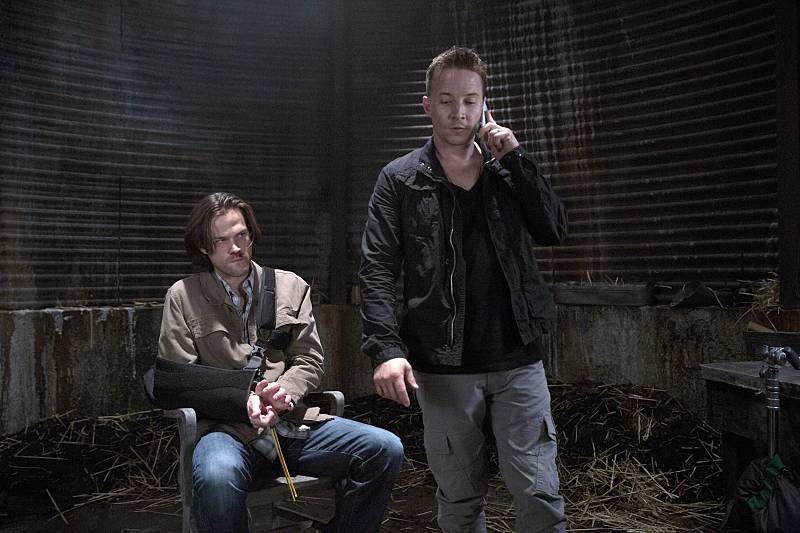 OK, I can't stand it. I really need to know. Who is Cole on Supernatural ? The series just introduced the character in its Season 10 premiere "Black," but I already came up with a few theories as to why Cole is looking for Dean weeks ago. Despite getting a little more information about the character and his story, I still can't figure out why he wants to kill the new Deanmon and why Cole has to kidnap and threaten Sam in the process. I can tell you one thing: Sam's determination and obsessive need to find Dean is really getting him in trouble and that's potentially why he got himself kidnapped in the first place.

So let's backtrack for a minute. In the premiere, we start with Sam torturing a demon to try and find Dean. It looked as though Sam was ready to do just about anything to get the answers he was looking for, which is not an uncommon Sam attribute. Throughout the episode, Sam searched for any clue possible to track his brother's whereabouts and he finally gets a break when he sees Dean on a surveillance video, killing someone.

That same surveillance photo pops up in Cole's hands and his wife realizes that Dean is back in their lives. How does she know Dean? We don't know that either. All we know is that Cole sees the photo and immediately goes to his gun cabinet to load up on supplies to try and find Deanmon.

Sam continues his search and finally discovers, thanks to Crowley, that Dean is a demon. But Sam's search doesn't stop. That's when he encounters Cole, who somehow put a kill switch in his car and caused it to break down so he could kidnap Sam and use him as bait for Dean. Dean doesn't take the bait, as he's without his conscience at the moment, but in the process we get a few hints as to who Cole is.

Cole says that he knows Dean used to be a monster, but that Dean wasn't the monster anymore. Now Cole is the monster. What exactly could that mean? Maybe when Dean was in Hell and torturing people, he tortured Cole and turned him into a darker version of himself. But how would that explain the wife and kid? Well, there are some horrible people in the real world who have families.

It seems like Cole will be back on Supernatural in the second Season 10 episode, "Reichenbach," which could be a reference to Sherlock Holmes and Moriarty's jump and presumed deaths off the Reichenbach Falls in "The Final Problem." Should we be worried about the future of our brothers Winchester? Is the title suggesting mutual destruction between Cole and Dean? Either way, I'm hooked. As per usual.