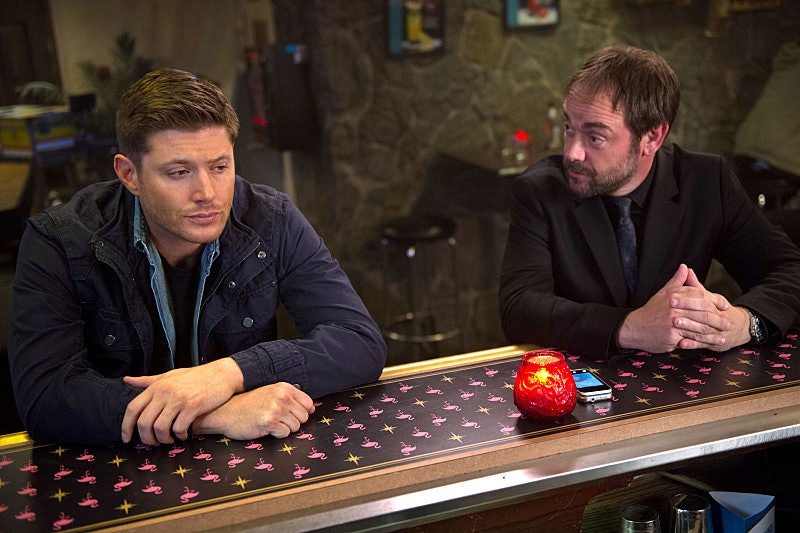 Alright Supernatural fans, settle a debate for me. Is Demon Dean more attractive than regular Dean? It is pretty damn entertaining to watch Dean sing karaoke to "I'm Too Sexy" and seduce women at the drop of a hat, but the Dean with a soul is so much... more. He's willing to do what's right, he has a sense of responsibility. He cares for his brother and he would never play foosball with Crowley. Dean is away from Sam, Castiel, and the whole Team Free Will concept. Instead he's hanging around the same dive bar singing tired, one-hit-wonders night after night. But in the Supernatural Season 10 premiere "Black," Crowley has other plans for his newly demonized friend. We find out rather quickly that Crowley and Demon Dean have been paling around for quite some time after Dean's resurrection into Demon form, and Crowley is getting sick and tired of Dean's ridiculously immature behavior.

He wants so much more from his demon Winchester. He wants Dean to live up to the potential Crowley believed he had when he became a demon. So what exactly does Crowley want from Dean? Don't worry it's strictly professional, Crowley wants Deanmon's help to rule Hell.

But wait, doesn't Crowley already run Hell? This was my exact thought as well. When Abbadon was killed by the First Blade (and Dean's Mark Of Cain of course), Crowley's detractors scattered. So you would think that they would flock back to the original King of Hell instead of getting tortured for all eternity. "Black" suggests to us that Crowley wants to revolutionize the way Hell is ruled, and for this to occur he needs Dean's help.

In fact, in order to make sure that Dean will make the cut, he sends a few of his henchmen to attack the new Deanmon (a nickname that will stick for me because it's super fun to write). But of course, Dean takes them out with ease. Dean's conscience and love for his brother isn't even an issue because of his demon status. In fact, he didn't even tell Sam what happened to him and won't tell him his location now. So it seems like everything is going perfectly for Crowley right?

Nope, Dean might be the perfect co-king of Hell, but he doesn't want any part of the monarchy nonsense. He seems perfectly content to sing more and more karaoke songs, get drunk, and have bar fights every night. And the last thing he wants is responsibility and a moral obligation to anyone or anything. OK, I think I settled the debate for myself. Deanmon may have more fun, but Human Dean is better in every other way.