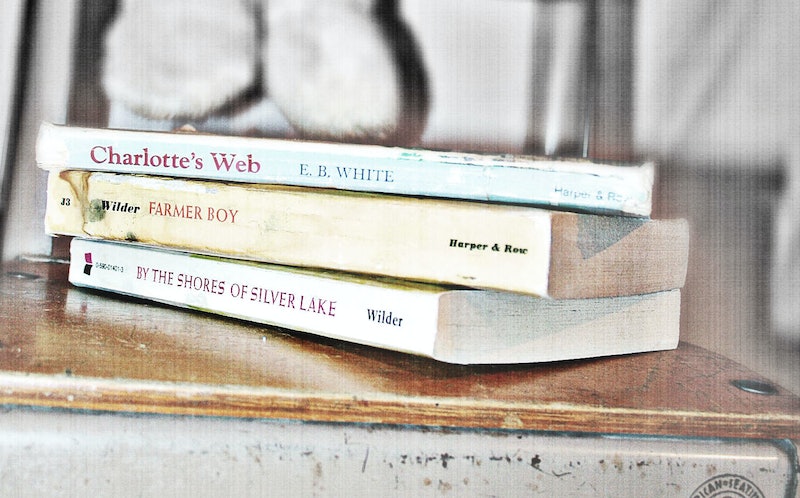 You know those children's books that stay with you as you grow up? The books that you keep coming back to year after year, because something contained in their pages resonates with you on such a profound, intrinsic level? For me, those books are Antoine de Saint-Exupery’s The Little Prince , Frances Hodgson Burnett's A Little Princess and E.B. White's short 1952 novel, Charlotte's Web (with Garth Williams' original illustrations, of course). Come the autumn, I feel a need to re-read this classic story in particular — maybe because, like the crickets in the book, everything seems to signal upcoming changes and new adventures.

It's funny how a little story about farm animals, a small (and then not-so-small) pig and a spider (something we so often associate with the grotesque) can contain in its mere 170 pages lessons about life, lessons about death and lessons about all the stuff in between. But E.B. White was nothing short of masterful. He used to mundane and the ordinary to signal the inexplicable and the tragic. He teaches us about animal rights, about innocence and about the corrupt nature of human beings (but also about the wonderment of being human). But most of all, he teaches us how to become better grown-ups by holding on to all the things that were special and true about childhood.

When, in that opening scene, Mr. Arable tells Fern that Wilbur is, "very small and weak, and [he] will never amount to anything," Fern becomes enraged at the thought of killing an innocent being just because he is smaller than the others. She fights for Wilbur with all her heart, and he never disappoints.

Magical things can happen in the morning

"Fern was up at daylight, trying to rid the world of injustice. As a result, she now has a pig." Or in other words, "The early bird gets the worm."

Sometimes your pets are good judges of character

All the animals in the barn trust Fern, because she is so quiet and friendly. But it's more than that. They can sense she's a good person, and in turn, they show her deep affection.

It's OK to be scared of doing things alone

When Wilbur moves to Mr. Zuckerman's barn, he is terrified of going out into the world alone. But when he does, he finds friendship and love and wonderment.

Doing nothing can be pretty amazing

"From three to four, [Wilbur] planned to stand perfectly still and think of what it was like to be alive." Taking time to immerse yourself into deep thought and contemplate your existence isn't such a bad way to spend your time, really.

Wilbur finds that the combination of an empty belly and a full mind result in restless, nightmarish sleep. It's better to nourish the body and calm the mind before resting your head on that pillow.

Don't make phone calls at the crack of dawn

Because "the quickest way to soil a friendship is to wake somebody up in the morning before he is ready. How can you be sure your friend is an early riser," after all?

Give people who seem rough around the edges a chance

When Wilbur first meets Charlotte, she seems brutal, fierce and bloodthirsty (for flies, that is). But in giving her a chance, he realizes that her heart is kind and that she's actually one of the most clever creatures he's ever known.

It's in the trees, in food, in the insects you never notice. And no matter how grim or sad things get, the beauty in all things living will never cease.

Charlotte insists on putting her victims to sleep before eating them, so that they feel no pain. But this small act of compassion can and should be applied to most of our actions and choices. People aren't much less fragile than flies, when you think about it.

Just because Mr. and Mrs. Arable can't hear the animals talk like Fern does doesn't mean she is lying, or that the animals can't actually talk. Mrs. Arable is reluctant to accept this, but luckily her husband is more open-minded.

Showing off is never a good idea

Wilbur wants to prove to Charlotte that he, too, can spin a web. Even though he is a pig, and has no weaving capabilities. In turn, he falls right on his bottom.

Or, at least, try not to do it often. Life's too short to rush, and it's definitely too short to be filled with anxieties and constant woes.

"Children almost always hang on to things tighter than their parents think they will." But the same concept can be applied to underestimating the emotional strength of those around us.

Don't be too quick to throw things away

Templeton the rat is constantly collecting bits and bats — objects that may or may not come into use, at some point in life. His reason is that "it pays to save things." If you've ever thrown away an item of clothing because you thought you didn't like it anymore, but regretted it a year later, you probably know what he means.

Never assume what you read/hear is the truth

People believe far too much of what they read in a newspaper or see on a TV show. Being too generous with the sources you trust only leads to naiveté and false impressions of reality.

Show thanks when thanks are needed

When the threat of Wilbur's impending slaughter first comes to the barn, Templeton fails to realize that if something happens to Wilbur, he, too, will grow frail and thin, for Wilbur always gives him his leftovers.

"A spider can produce several kinds of thread. She uses a dry, tough thread for foundation lines, and she uses a sticky thread for snare lines — the ones that catch and hold insects." Just something to think about when we're getting ready to crush the one in our bedroom rather than let it out the window.

Beware of those who change their tune too easily

As soon as Mr. Zuckerman thinks that Wilbur is a terrific pig (the word Charlotte first threads into her web in an effort to save her friend), he cleans Wilbur, gives him fresh, bright straw and totally changes his mind about slaughtering him. Though it greatly benefits the story, it does make you wonder about Zuckerman's character.

Try not to fear what you don't understand

Mrs. Arable is terrified that something is psychologically wrong with Charlotte because she talks to her animals. She doesn't understand it, so she is scared of it. But nothing is wrong with Charlotte — she's simply an innocent child with a beautiful connection to other creatures.

Leave room for others to voice their opinions

Crickets are known for signaling the changing of the seasons, and subsequently spreading the rumor of sadness and change. The autumn, though, is nothing to fear. And sometimes, change can result in gorgeous things, like red and yellow leaves.

Maintain your sense of humility

"Wilbur was modest; fame did not spoil him." As a result, everyone gravitated toward him even more.

One friend is all you need sometimes

When the time comes for the big fair, Wilbur notes that he would have felt homesick and lonely had Charlotte not agreed to accompany him. Sometimes, just one person can make all the difference.

Never dismiss those involved in the creation of something great

Everyone admires Charlotte's web when she begins weaving words into it, but no one notices Charlotte. It can be compared to when someone hears a lovely song and notices the musician rather than the brilliant producer behind it.

It's OK to be excited about your achievements

When Wilbur wins a ribbon at the fair, he muses, "It is deeply satisfying to win a prize in front of a of people." Though he is humble, he still allows himself to revel in his success.

When he fair has come and gone, Charlotte is battered and nearing death. All of her energy and love have gone into saving Wilbur, but her strength becomes exhausted. And though it is a tragic conclusion to a magical book, it's one that demonstrates that death breeds life and that true friends will never be forgotten.