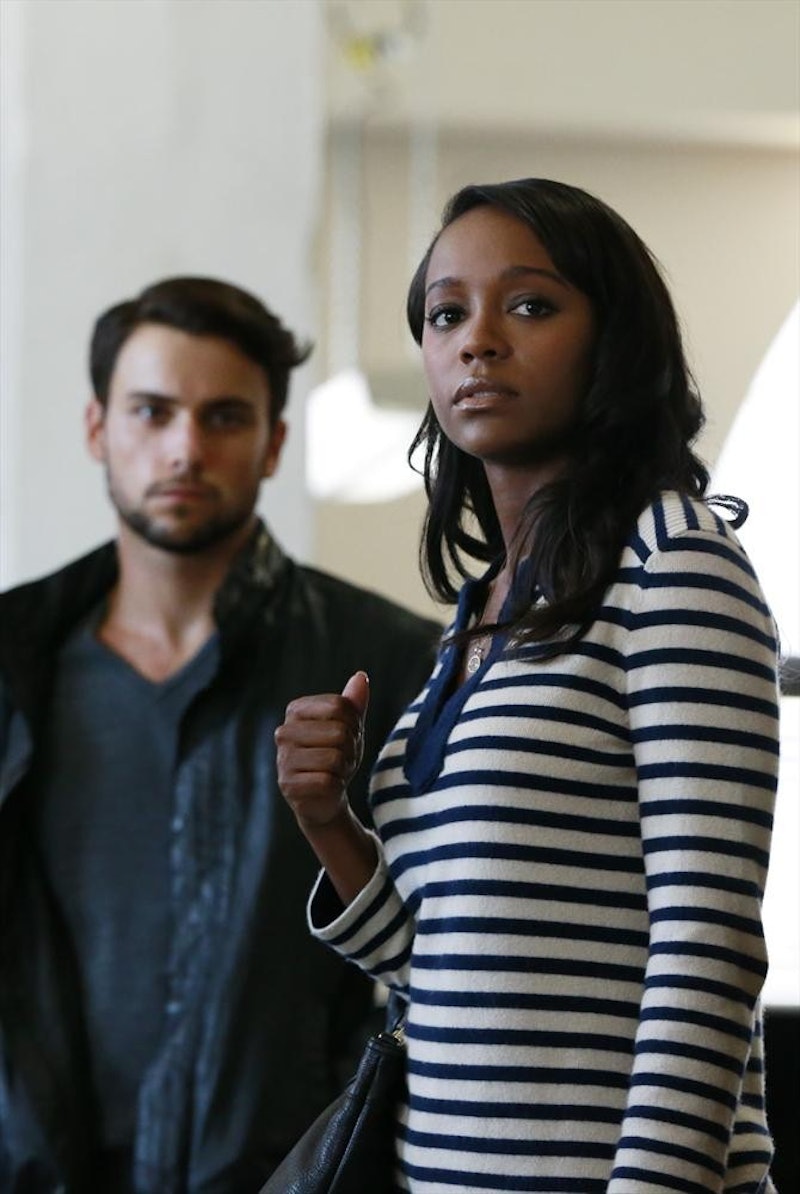 There have only been two episodes of How to Get Away with Murder released so far and already the group dynamics among the stunts who made it into Annalise Keating's law office are fascinating to watch. Connor Walsh and Michaela Pratt have a dynamic that borders on fremeies — or even straight up enemies, if they can't be called friends yet. They're both ambitious, resourceful, manipulative, and eager to prove themselves by any means necessary, even if it means lying or running over the more docile Laurel Castillo, Asher Millstone, and Wes Gibbons. However, a sneak peek at Thursday's How to Get Away with Murder episode reveals that Connor knows Michaela's fiancé Aiden Walker... maybe even intimately.

In TV Line's sneak peek, Michaela introduces Aiden to the other students she works with, but Connor greets him with a warm smile and a bro hug. When Michaela asks how the two of them know each other, Aiden explains they went to boarding school together — but the look that flashes over Connor's face makes it clear that's not the whole story. The clip ends with him whispering to Michaela that they have "more in common than [he] thought", which certainly implies they share a taste in men. So has Connor hooked up with Michaela's fiancé? And, even more importantly, what does that mean for his and Michaela's relationship?

It's clear from the confusion on Michaela's face that she had no idea how or why Aiden and Connor would possibly know each other. From that, I can guess that she might not know that Aiden was ever, at minimum, bicurious. There's a good chance that what happened between Aiden and Connor was nothing more serious than an experimental hook-up, possibly even at the boarding school that he mentioned. Connor, by his own admission, "doesn't do boyfriends", but he does seem to enjoy having a good time and hook-ups certainly fall under that banner.

But what if it goes deeper than that? The HTGAWM creators hinted that Connor would have a romantic storyline in Season 1 that would be introduced in the next episodes, so it was easy for me to assume that they meant his burgeoning romance with IT technician Oliver. However, what if Aiden is actually the reason that Connor doesn't do boyfriends? What if he was the first great love of Connor's life that ended badly? What if Michaela suddenly finds herself involved in a love triangle with her own fiancé and her greatest rival on Professor Keating's student team? What if the addition of Oliver makes that love triangle into a love square? Annalise Keating might not be the only one with a convoluted love life this season, that's for sure.