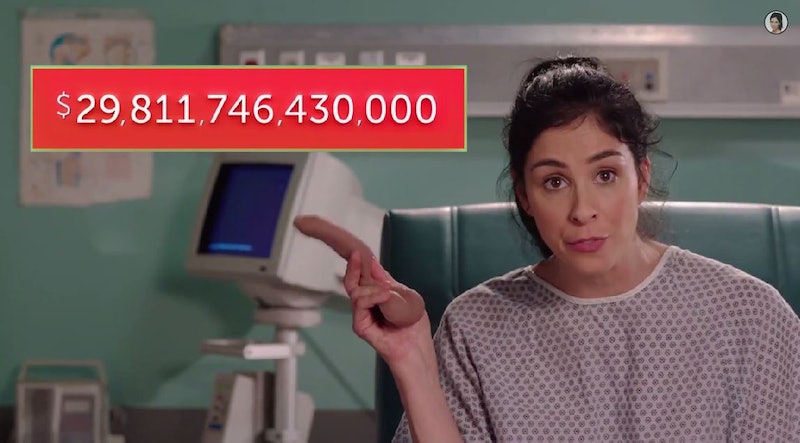 Like it or not, the gender wage gap does exist, and it’s not just going to go away on its own. But Sarah Silverman and the Equal Payback Project are taking the proverbial bull by its mean little horns and tackling the problem head on — and they’ve got a video to tell you exactly how they’re planning to do it, too. Oh, and they’re definitely planning to make you laugh hard enough to snort your coffee while they explain the whole thing to you… because that’s just what happens when you’ve got Sarah Silverman as your spokesperson.

The idea behind the Equal Payback Project is to crowdfund the wage gap — or, at the very least, raise money for an awesome non-profit fighting for equal pay. According to Equal Payback’s research, male surgeons make $590 more than female surgeons on a weekly basis; mothers make 69 cents for every dollar fathers make; minority women make even less in comparison to white women, who we already know make less than white men; and all that, in their words, “is cray.”

So, here’s Silverman to explain what they’re planning on doing about it. Like all of her work, it’s more than a little… shall we say, off-color; as such, you may want to be careful proceeding; there’s a lot of NSFW imagery ahead. But hey, if you’re A-OK with that, read on (and scroll down to watch the whole thing yourself):

Where Does the Wage Gap Live?

In a word: Everywhere. It exists in a huge variety of professions: Doctors, lawyers, teachers, miners, and even, as Silverman says, the oldest profession of them all. That's right: “Tailors.”

How Much Is This “Woman Tax,” On Average?

But, though Sarah's point is that being a woman comes with a "tax," in this case measured in wages lost, referring to it as a "vagina tax" isn't the right way to put it — one's anatomy does not their gender make, as any member of the trans community will surely tell you.

What Can We Do About It?

Silverman’s solution? Magically becoming a dude. “In the grand scheme of things,” she says, it’s far less expensive than the money she’ll probably lose because of the aforementioned lost wages that come from being a woman. Though, we should note that it is not one's anatomy that determines their gender — having a penis does not necessarily make you a man...and the financial struggles of transgender people are certainly no laughing matter.

…OK, But Is There a Less Drastic Solution?

“I realize this may be an extreme solution for some women,” Silverman notes — but that’s where the Equal Payback Project comes in. True, the project’s goal to raise $30 trillion — that is, the total amount of money lost by the U.S.’s 69 million working women due to the wage gap — is incredibly lofty… but it’s a win-win situation either way: If the goal is hit, every woman in America will get a check for the amount they’re owed; and if it’s not (which, let’s face it, is the most likely outcome), the money will get donated to the National Women’s Law Center so it can do things like help push through legislation such as the Paycheck Fairness Act, hold employers accountable for the legislation that’s already in place, and more.

Sarah Silverman has named her breasts Isles and Rizzoli. Just, y’know… for the record.

“It’s insane that equal pay is still something we’re fighting for in 2014,” said Karen Short, creative director at Droga5, which created the video, to AdWeek. “More than 50 years have passed since the Equal Pay Act, and the typical woman is still making only 78 cents to a man’s dollar. We want to breathe new life into an old issue still relevant to the modern working woman. It’s a wake-up call for us to take charge of our financial fates.” Ayyyyy-men to that. Added fellow Droga5 creative director Casey Rand, “Equal pay may not be a sexy issue, but it’s an important one. And it is absurd. Young women need to know what’s at stake. And we knew that to get them to engage, we’d need to play up that absurdity."

Watch the whole video below — and head on over to the Equal Payback Project’s website to donate, share, and find out more.