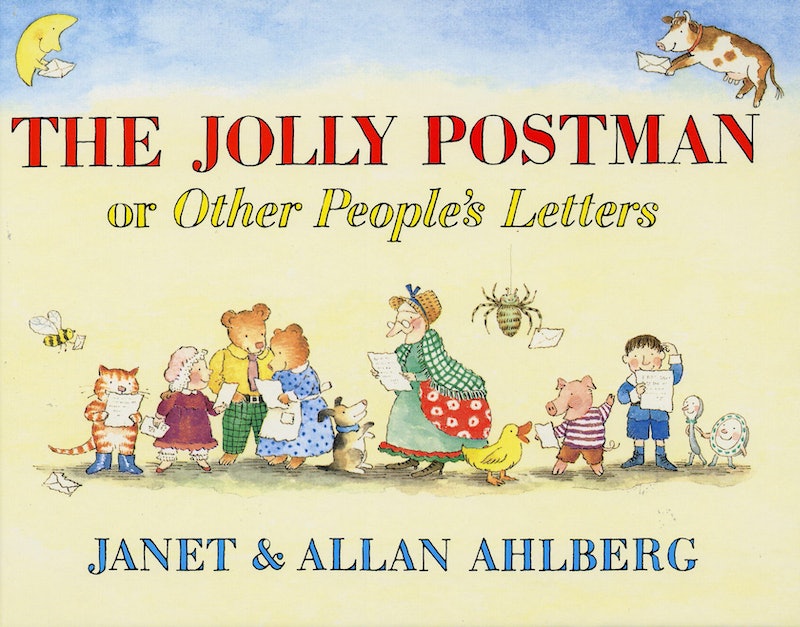 No one was making children's books back in the day like wife and husband Janet and Allan Ahlberg. This duo of writer and illustrator were ridiculously good at building stories and books — and yes, there's a difference — that both kids and parents would could obsess over. Even today, the books don't feel even a tad dated, despite the most famous series being about mailing letters in the literal mail. Handwritten. Letters. Delivered by a postman. Maybe it's just something about being so British.

The Jolly Postman, or Other People's Letters had two sequels: The Jolly Christmas Postman and The Jolly Pocket Postman, though the latter was published after Janet's tragic death from cancer. They've won all kinds of awards in both the U.K. and the U.S., and nearly three decades later, copies are still on the top of lists for libraries.

Why did we love The Jolly Postman?

For those who have no idea what the Jolly Postman books are all about, three things:

So these weren't just books, these were experiences. Of course we loved them.

But Allan and Janet didn't rest on this concept alone. They took some hints from their other work, the "I Spy"-type book Each Peach Pear Plum, and put so much effort into the details.

You could spend a half an hour on each page of the Jolly Postman books, and I know because I would. And I'm not just talking about the letters. The illustrations were fascinating, and so much detail was put into each and every square millimeter of the page.

This illustration is just one page, but look closely. You've got a black cat washing the dishes in the background. On the drying rack there are classic witch stockings and, yes, a bat. The name of the jam on the table is "Horrid Jam" and I haven't even gotten to the newspaper yet. The newspaper is called "Mirror Mirror" (I die) and there's a wedding announcement for what looks like Prince Charming, plus a page dedicated to a stolen pig.

Janet and Allen seriously care about their readers. We should all give them a round of applause.

OK, part of my grown-up self still loves it for all of the exact same reasons I just said. I have so much respect for writers and illustrators that are dedicated to their craft and so in tune with their audience. The book reminds me of things like Sesame Street; it's aimed at children, but it has so many details and so much charm that adults would never get bored following along with their kids.

The Jolly Postman is my absolute favorite book to gift to my friends with young kids. I basically just want everyone to get the joy of growing up with my favorite postman and all of his pals.

The story is timeless. It feels like it doesn't belong in any period in the world, which is why we can still purchase it for kids 30 years later, and one of the reasons why we do.

If You Loved The Jolly Postman, Try Reading...

Like seeing all your favorite fairy tale characters colliding together in a new story? Cress is the closest you can probably get to that outside of your dreams.

Bear with me here; this is definitely not a timeless story. But Myracle, like the Ahlbergs, is experimenting with form and means of communication, it's just that this time, TTYL is told via instant messaging.

3. An Order of Amelie, Hold The Fries by Nina Schindler

Speaking of experimenting, Schindler does a totally new thing of devoting each page of the book to one message. There's this love story, told back and forth through all sorts of media, letters, news clippings, emails, and scribbles on take-out napkins and the like.