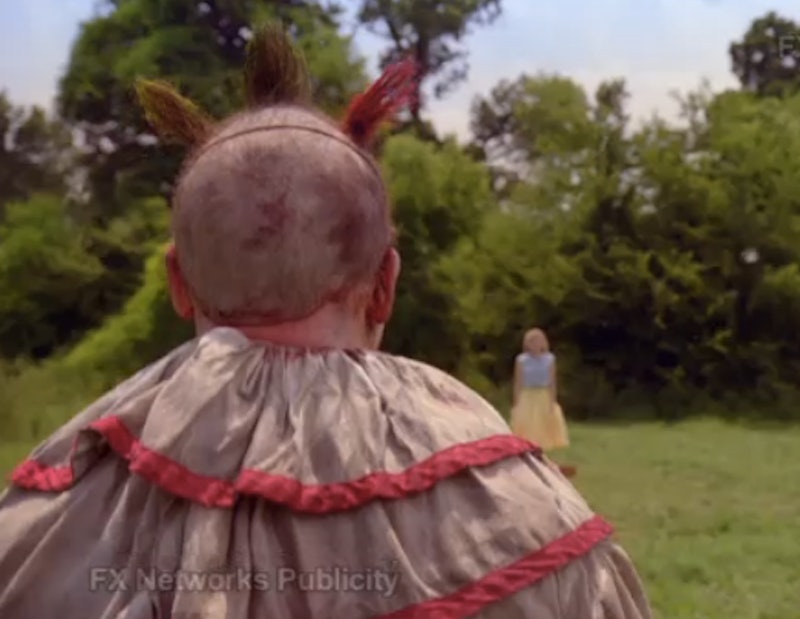 Yes, we know that the character is played by John Carroll Lynch, also known as Drew Carey's brother on The Drew Carey Show, and also known as the maybe-probably Zodiac Killer from Zodiac (which AHS: Freak Show's first episode clearly takes inspiration from, with the scene pictured above). But who is this guy? We've learned very little about the character since Murphy revealed that the season would feature someone known as the "Clown Killer" back in May. (The production has since changed his name to Twisty the Clown.) All the showrunner has revealed to fans? 1) Twisty the Clown is hiding something terrifying under that mask, and 2) Twisty the Clown is terrifying. I mean, just look at him:

We said in the writer’s room that if we were going to do clowns, we were going to create the most terrifying clown of all time ... That was our goal when we were writing him, but I’m worried about people being too afraid of our clown. It’s heart-stopping what he does. I’m worried. I’m worried that people are going to have cardiac arrests ... The clown’s intro in the first episode is … even I was terrified of it. It’s brutal. Two crew members told me they have had nightmares about this clown since we started shooting and they’re not even scared of clowns.

And, for once, the buildup doesn't seem like a ploy for viewership. Because, once again, look at Twisty.

Yeah, you feel it too.

Can you believe that's the same person as this cuddly guy?

Speaking of, Lynch gave a little bit more information up to BuzzFeed, describing his character's motives as "strangely, oddly pure," which could explain Twisty's fascination with toys... and children. And that latter point could perhaps help us determine Twisty's motivations. Clearly, based on his bag of tricks and "fun"-filled kidnapping dungeon, Twisty is a childlike being, one with a clear love for spectacle and playthings.

And there is indeed such thing as Peter Pan Syndrome, a condition in which an adult cannot fathom feeling comfortable in his or her grown-up body. He doesn't want to grow up — he wants to play. Add to that the fact that Murphy notes that the clown is "furious that the freaks have shown up," and you might be able to see into Twisty's blood-soaked skull. Perhaps Twisty's simply a performer at heart, and whatever is under that mask (a physical deformity? A sewn-shut mouth?) is inhibiting his ability to play in front of crowds as large (or small) that the freak show attracts. So, he creates one — full of his own hand-picked audience of children — of his own.

And are we not entertained by the result?

No. No, we are not. Because clowns are horrifying. And Twisty's post-balloon-pop freak-out only proved that the dude is not too good at improvising in the spotlight.

Of course, Twisty's connection to the freak show could be far simpler than that. It would be easy to theorize that he's Jimmy's father (after the slew of mommy issues Murphy gave us in Asylum, perhaps it's time for daddy issues to get the spotlight), or perhaps he hates the freak show because of its leader, Jessica Lange's Elsa. One could assume Twisty might be a shunned freak — but, then again, it doesn't seem like the show rejects anyone but normals, and the dude is definitely not normal — but a bigger clue might be in the fact that Twisty can't talk. What's under that mask? A German accent, perhaps? We know Elsa was formerly a cabaret star, and Cabaret taught us that the only people who could possibly despise the form of entertainment were, of course, Nazis. Asylum proved that Murphy isn't afraid to touch Nazis in his material (remember that Anne Frank storyline?), and, truly, the only thing more terrifying than a killer clown is a Nazi killer clown eager to finish unfinished business.

But then, of course, a killer clown with so distinct a purpose seems far too sane a killer clown. And we could also point to another inspiration to determine Twisty's motivations: the original Killer Clown, John Wayne Gacy. Of course, his story is far less, as Lynch would say, "pure" in nature. An abused child-turned-cold-blooded killer, Gacy murdered at least 33 teenage boys, many of whom were kidnapped after meeting Gacy's circus-inspired alter ego, Pogo the Clown. Twisty's mask could be hiding the product of abuse, and, based on his work in American Horror Story: Freak Show's premiere, he's certainly on his way to dozens of murders.

But there are plenty of differences between Twisty and Gacy — none of Twisty's murders seem to be sexually motivated (thank god), and Twisty targets adults, not children.

So is there a chance that Twisty is instead more inspired by pop culture's most famous clown, It's Pennywise?

There's always a chance — based on the way that Twisty navigates murders, with nothing but brute strength, he could, in fact, be something (24-year-old spoiler alert!) otherworldly like Pennywise. After all, why are we assuming there's something human under Twisty's mask? (Anyone bet there are spiders under there? There has got to be spiders under there, right?)

Then again, in the same interview with BuzzFeed, Lynch also said he hoped viewers "see a reflection of their own lives" in Twisty.

I don’t intend to advocate for the horrific characters, but I hope they reflect humanity at its most vicious because we need to really look at ourselves and see it. Otherwise, we’re deluding ourselves into thinking we’re not capable of it.