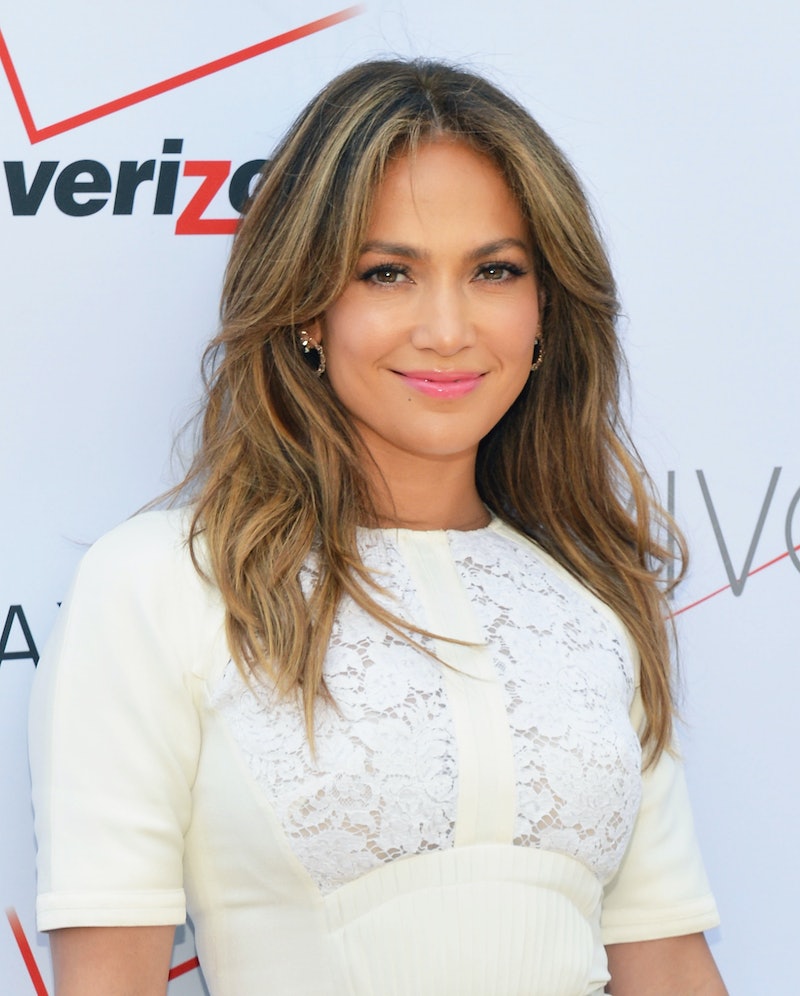 Many people stand by the belief that "an ex is an ex for a reason." Once a relationship is done, these people are done acknowledging the existence of their former flame no matter how ingrained they were in each other's lives. Breakups become both an elephant in the room and an off limit topic for friends and family. On the opposite end of things, Jennifer Lopez is clearly not one of those people. Jennifer Lopez was spotted out to dinner with her ex Casper Smart Tuesday night. Many people were left wondering if they are planning to get back together, a logical question since they only recently broke off their relationship.

But not so fast, this is actually standard Lopez operating procedure. While most people refer to an ex boyfriend as "he shall not be named," "the ex," or just "him" in a scowling tone, J. Lo is not only comfortable talking about her exes, but also talking to them. It's a weird phenomena, people breaking up without breaking each other apart. Whether you think it's normal or not, it is definitely impressive to see where Jenny from the Block stands with her bevy of her ex love interests. Take a look.

Jennifer Lopez and the artist formerly known as Puff Daddy dated for three years in the late 90s. Their relationship was infamous for its shootings and low cut Versace dresses. Even with all the drama there doesn't appear to be a love loss here. In 2003, while she was dating Ben Affleck, Lopez donated $26,000 to support Diddy as runner in the New York City Marathon. Recently, Diddy referred to her famous booty as "a work of art", saying: "Oh my God. I’m so lucky to have that great woman in my history. She is one of the greatest I’ve ever seen." Jenny reacted to his compliment with praise of her own by saying: "As much as he roots for me and as proud as he is of me and of the time we had together, I, I am just as proud to see what he's done." Am I the only one hoping that they get back together? They would just be the ultimate power couple.

Bennifer started the wave of branding couples as a singularly named unit. This relationship was tumultuous for me as a J. Lo fanatic. From the pink diamond ring, to Affleck's Jenny from the Block music video cameo, to the box office bomb Gigli, there was always a new Bennifer-related news topic. Affleck has found a replacement to fill the Bennifer moniker with his perfect marriage to Jennifer Garner so it does not seem like he and Lopez are at BFF status. Still, the exes do follow each other's careers and keep in touch. He remarked: "We do have the kind of relationship where there'll be an e-mail saying, 'Oh, your movie looks great.'" Affleck cemented their mutual reverence for each other, adding: "I respect her. I like her. She's put up with some stuff that was unfair in her life, and I'm really pleased to see her successful." It's nice to see that they put the velour track suits behind them and have been able to move forward on happy terms.

Cris Judd is a former backup dancer known best for his nine month marriage to Jennifer Lopez. The duo dated from 2011 to 2003. Judd has been happily married to his wife Kelly for five years. True to form, J.Lo has nothing but love for her ex husband. During her June appearance on Watch What Happens Live, she had kind words to say about Judd. "I had a brief marriage with Cris Judd, who is an amazing person and whom I love." It is not likely that he is going to be directing or dancing in any of Lopez's music videos at any point soon, but it is nice to know that the two have no animosity between them.

It really seemed like J. Lo and Marc Anthony were meant to be when they married in 2004. They first met backstage at a Broadway show in 1998. She played the love interest in his music video for "Contra La Corriente" and the two recorded a duet for her On the 6 album called "No Me Ames." Anthony held a candle for Lopez while they both dated and married other people. The couple announced their split in 2011 and finalized their divorce this year. They have kept it amicable for their twins Max and Emme, age six. Anthony even befriended J. Lo's now-ex boyfriend Casper Smart. It is even reported that turned to Anthony to get advice about ending her relationship with Casper Smart. It is sweet to see he wants what's best for the mother of his children and cares so much about her well-being.

This one is a little confusing. Jennifer Lopez and Casper Smart announced their split back in June. I get being friends with someone you cared deeply enough to date, but this dinner date in October seems a little soon to me with the breakup of a three year romance still being fresh. It is reported that "they remain great friends." I can't help wondering if they are possibly getting back together or if this is just typical Jenny from the Block out to dinner with a former boyfriend. In the same Watch What Happens Live interview where Lopez referenced Cris Judd, she also said, "Beau (Casper Smart), we just broke up, who I love as well. He's a good friend."

It will be interesting to see if they will remain "good friends" or if they end up spending more time together and rekindle that flame. Either way, it is clear that Jennifer Lopez will handle of their interactions with poise and class.