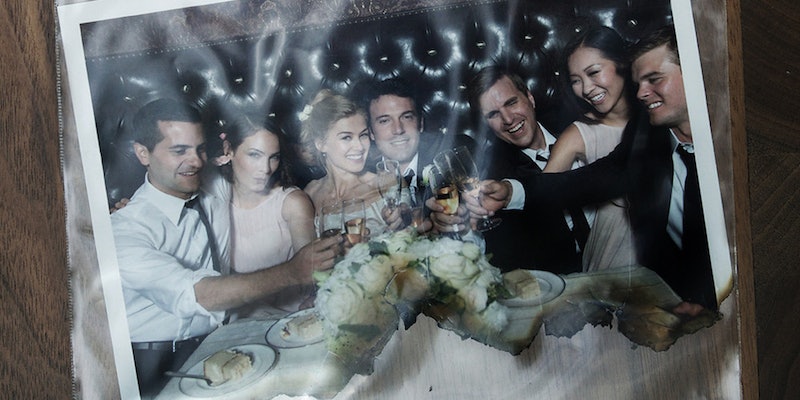 With all the chatter about Gone Girl 's many plot twists and exceptional performances by its stars Rosamund Pike and Ben Affleck (not to mention a killer cameo role by Tyler Perry as Affleck's attorney, and Carrie Coon as the sister), I can't help but wonder what the intended audience of David Fincher's latest offering truly is. There are the Fincher diehards, of course. There are fans of Gillian Flynn's novel. But this film, like many of recent years, doesn't necessarily fall into a particular, digestible category. It is a mystery. It is a thriller, yes. It is a drama — certainly. But is it a romance? Well, that depends on your own personal definition. By now, much of America has seen the nearly three-hour long Fincher epic, but for those who haven't — major spoilers within.

Rolling Stone's Peter Travers said it best when he wrote in his review of this film: "David Fincher's shockingly good film version of Gone Girl is the date-night movie of the decade for couples who dream of destroying one another."

And Vulture published an essay on someone who actually went on a first day to the flick. Needless to say, it wasn't the make-out inducing fare one might request for such an occasion. So, here are 7 reasons Gone Girl is the absolute worst date night movie. That is, for couples who prefer happy-endings and loving relationships portrayed on screen.

Both Protagonists/Antagonists are Equal Opportunity Cheaters

As we see in the film, it's Nick's cheating that spirals Amy into her ultimate plot for revenge. Nick cheats on his seemingly near-perfect wife with one of his creative writing students, prompting Amy's epic "Cool Girl" monologue and sending Nick into a treasure hunt that could end his life. Amy cheats on Nick too, but her extramarital activity is enacted out of pure hate and desperation, rather than Nick's lazy lust.

In a scene that will be engrained in your memory for hours after a viewing, Amy Dunne seduces her former stalker (played by Neil Patrick Harris) only to slit his throat with a box cutter as he orgasms. And it's every bit as gnarly as it sounds. This scene alone should be enough to convince anyone this film is anything but big-screen romance.

Manipulation is the Glue that Binds Their Relationship

"Tit for tat" should be the slogan of the Dunne family. While Nick plays the frat-boy-turned-out-of-work-slob with utmost indifference, Amy is the exact opposite of her bonehead husband — completely calculated with every slight movement. Every hand motion through the hair, every roll of the shoulder a planned move on the chess board that is destroying Nick Dunne. But Mr. Dunne is not himself helpless, thanks to Tyler Perry's Tanner Bolt, and Kim Dickens Detective Rhonda, who fight Nick's battles. So adoring couples, if you've ever felt an inkling to manipulate your partner, this movie will act as fuel to the fire.

Suicide is a Viable Option Out of the Relationship

Because Missouri has the death penalty, Amy is counting on her disappearance and Nick's arrest to lead to his eventual visit to the electric chair. To put a nail in the hypothetical coffin, she also toys with the idea of killing herself, a body acting as enough evidence to kill Nick for certain. Tiny sticky notes line her calendar: "Kill Oneself?" she has posted every few weeks.

Communication to Work Out Issues Isn't an Option

When Amy sees Nick cheating on her for the first time, instead of confronting him and his mistress, she slinks back into the darkness, never to utter a word about the incident. As most loving couples know, communication is the key to any lasting relationship. That is of course, if you're Amy and Nick Dunne.

Amy resents Nick for uprooting her Big City personality to a small midwestern town. She also resents Nick for spending her money on new laptops and video games when he loses his job, and Nick resents Amy for giving back her trust fund to her parents. Money, it seems, is enough to pull any couple apart.

Amy Dunne is the Original Two-Face

Talk about dating a villain. While Gone Girl allows you to decide who the bigger baddie is — cheating and abusive Nick, or muderous and manipulative Amy — we have to give Amy snaps for channeling the original villain, TwoFace. She is both Cool Girl Amy and Amazing Amy, if not more characters from her multi-split-personality.

All of this goes to say, Gone Girl is the anti-date movie. And if you decide to see it with your significant other, don't be surprised if you're both side-eyeing one another on the drive home.

More like this
The 'Lady Chatterley's Lover' Book Leaves Us With A Troubling Question
By Catharina Cheung
Keke Palmer Paid Tribute To "Other Half" Darius Daulton After Announcing Pregnancy
By Jake Viswanath
Jodie Turner-Smith & Joshua Jackson's Relationship Timeline Includes Her Proposing
By Jake Viswanath
J.Lo Wants To Make A Sequel To This Movie With Ben Affleck
By Jake Viswanath
Get Even More From Bustle — Sign Up For The Newsletter