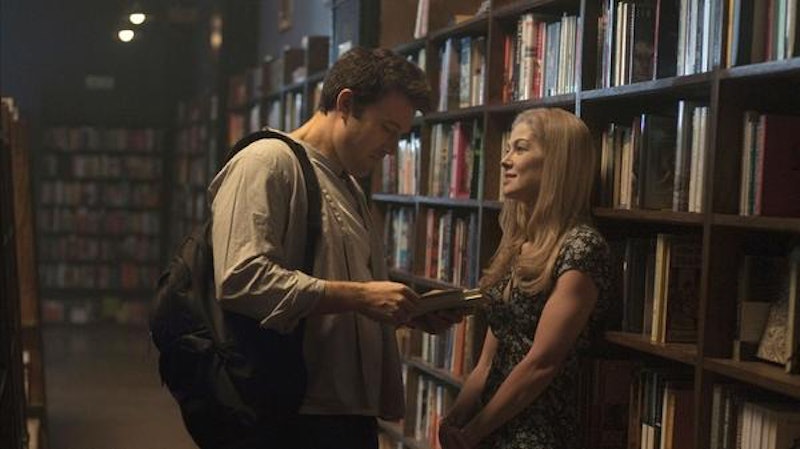 In case you hadn't heard, author Gillian Flynn and director David Fincher are tearing it up at the box office with their film Gone Girl . But as much as people are eating up the terrific acting, insane plot twists, and typically Fincher-esque tension, there's one thing not everyone loves: the ending. Yes, the totally changed/barely different/completely the same final minutes that caused so much controversy before the film even premiered — they don't result in Amy going to prison or getting killed or in any way receiving retribution for her evil acts.

Instead, both the novel and the film end with Amy and Nick in an uneasy truce, agreeing to stay together for the sake of their unborn child, as well as the less altruistic fact that they're only their best selves when they're clashing with each other. Originally, Flynn didn't intend for this ending to imply a forthcoming sequel. In an interview with Entertainment Weekly (where she used to work as a television critic), the author said:

But that was back in 2012. Apparently Flynn has rethought her stance on the issue, or perhaps Amazing Amy just hasn't relinquished her hold on the author's mind, because now she seems not only open to the idea of a sequel, but excited about it. In a recent interview with BuzzFeed, when asked how she pictures Amy and Nick as parents, Flynn responded:

I do feel like I might have to dip back in on them in 10 years and see what they’ve wrought. Nothing good. The problem is they’re inherently selfish people. They ultimately stay conjoined for selfish reasons. They are addicted to each other, in a way, and who they are and who they’re reflected back to each other as.

We know Flynn is pretty busy these days, what with a TV show, another film, two books for Random House, and an HBO series (for which she's re-teaming with David Fincher). So to help her kickstart that Gone Girl sequel, here are four possible ideas for what could happen to Amazing Amy 10 years down the road:

Plot: The most obvious premise for a Gone Girl follow-up is for Amy to go missing again. Imagine that she disappears under almost the exact same circumstances as before — how does the media react? What do the police do? Does Nick fall immediately under suspicion again? Or is he given the benefit of the doubt this time around? Nick spends the majority of the book fearing that his 10-year-old daughter (who they named Hope, naturally) has adopted her mother's sociopathic tendencies and killed Amy.

Structure: One of the most fascinating aspects of Gone Girl is its dual narratives; any sequel would have to possess a similarly unique structure. The first half of Gone Again would split its time between Nick in the year leading up to Amy's second disappearance... and Hope being tried for murder. The second half of Gone Again would be split between Nick during his daughter's trial and Amy leading up to her death.

Twist: Detective Boney had ruined her career trying to bring Amy to justice, and finally confronted her about the truth. Amy attacked her and Boney accidentally killed her assailant, so she staged a crime scene to make it look as though Amy had been abducted. When Nick finds out the truth, he's relieved to learn his daughter isn't a killer... just in time for Hope to be arrested for Boney's murder, which she committed out of vengeance for her slain mother. That's the murder the young Dunne was on trial for.

Plot: Of course, if you have Gone Girl then the natural follow-up is Gone Boy, isn't it? This time Nick is the one who goes missing under mysterious circumstances. Margo is convinced Amy killed him, but Amy claims that he faked his disappearance to get back at her.

Structure: This time it's Nick who gets diary entries, as he secretly chronicles his day-to-day life with Amy as evidence for a future case, should she ever kill him. These entries alternate with Amy's perspective as she undergoes the intense media scrutiny Nick was subjected to all those years ago.

Twist: Nobody will see it coming: it turns out that notoriously unreliable Amy was telling the truth! Nick did fake his disappearance, as part of a master plan concocted with the help of Margo, Boney, and Tanner Bolt to bring Amy down. (They hoped she would unravel under the pressure from Sharon Schieber, Ellen Abbott, and the like.) But Amy manages to track Nick to his hideout, and the two engage in a War Of The Roses-like brawl that ends with them both dead (though they confess their love to each other with their final breaths). Custody of Hope transfers to Margo, who is uneasy with her potentially unstable niece.

Plot: In this version, neither Amy nor Nick are the ones to disappear — instead, it's their daughter who vanishes. On her 10th birthday, little Hope is apparently abducted from the Dunne household. Nick is afraid that Amy snapped and killed their child; Amy believes that Nick spirited their daughter away from her influence.

Structure: Chapters alternate three ways between diary entries from Hope, chronicling her parents' troubled marriage, and transcripts of interviews that Detectives Boney and Gilpin are holding with both Amy and Nick in separate rooms, trying to figure out which one is lying.

Twist: Boney and Gilpin are unable to find any evidence against either parent and are forced to release them both; Nick and Amy return home under an uneasy truce, determined to get to the bottom of their daughter's disappearance. It turns out neither of her parents abducted Hope — she was taken by a dying Jacqueline Colllings as revenge for Amy killing her beloved son Desi ten years ago. Nick and Amy find Hope at the Collings lake house, where Jacqueline is about to murder the girl in the bed where Desi died. The elderly Collings holds the Dunnes at gunpoint, but young Hope saves them by killing her abductor. Nick and Amy return home with their murderous child, their relationship stronger than ever.

Plot: Years after Amy, Nick, and Hope have moved back to New York City, Nick learns that his twin sister Margo has gone missing back in Carthage, Missouri.

Structure: Letters that Nick wrote to Margo about his Big City life with Amy alternate with Hope's perspective as she accompanies her father back to his hometown to search for Margo.

Twist: Margo's disappearance was a plan that Nick was in on from the beginning as an excuse for him to take Hope and leave Amy behind in the Big Apple. He, Margo, and Hope all go into hiding together, finally escaping Amazing Amy's clutches forever.

More like this
Howard Stern's Net Worth: Is He The Richest Man In Radio?
By Hugh McIntyre
What’s New On Netflix: 'Stranger Things' & 'Mean Girls'
By Arya Roshanian
Anya Taylor-Joy Might Be Engaged To Her Musician Beau
By Jack Irvin and Sophie McEvoy
Here’s Everything Coming To & Leaving Netflix In July
By Grace Wehniainen
Get Even More From Bustle — Sign Up For The Newsletter