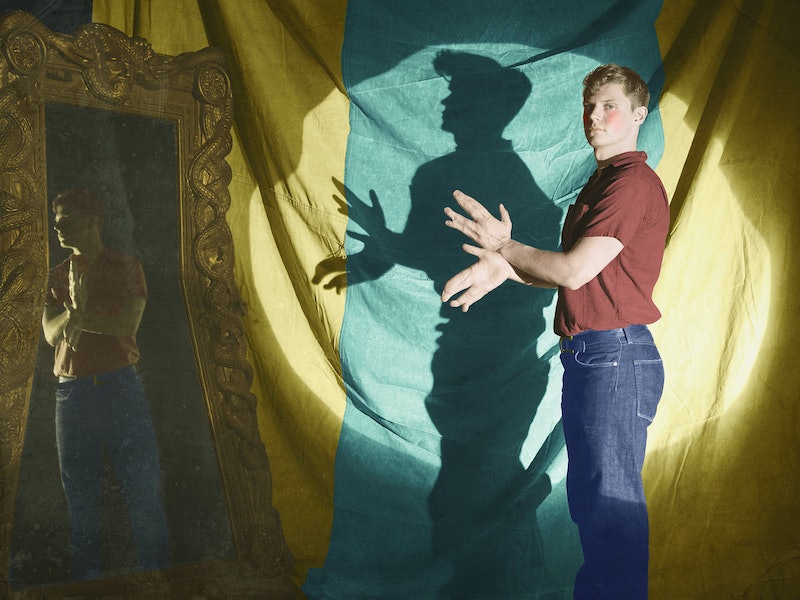 I'm sure many girls have always assumed that Evan Peters was good with his hands, and thanks to American Horror Story: Freak Show 's premiere epside "Monsters Among Us," we were all able to experience that fact firsthand. Or at least watch someone experience it firsthand. Because it turns out that Peters' Jimmy Darling uses his Lobster Boy claws for sex for more than Elsa's sideshow. As a way to make some extra money, he profits from his deformity by manually pleasuring bored and lonely housewives, whose husbands are too busy working or what not to pay them any attention. Enter Jimmy the Gigolo.

I'll admit, when the scene first started, I thought these women were attending some sort of at-home sex toy demonstration. One woman even assured a first timer how relaxed she'll feel once it's over. But again, at this point I still remained somewhat in the dark, thinking that they were merely taking vibrators or dildos out for a test run. (They were referring to it as a "product," after all.) But then the back room was opened and all was revealed… quite literally. After telling his next customer to lay on the bed, Jimmy tenderly assured the woman that there was nothing to be afraid of right before moving his long, claw-like fingers up her dress as she cried out in ecstasy. So yeah… that just happened. It's not exactly the sex scenario I was hoping to see Peters in this season, but I guess something is better than nothing at all? Needless to say, it's completely understandable if your heart and your hormones are feeling a little confused right now.

I mean… what exactly was he doing up there? Granted, I can make a pretty good assumption given that his hands are basically an exact replica of the shocker sex move. My guess is two of those fused fingers went in the woman's vagina, while the other fused fingers went… well, where the sun don't shine.

But is that really how it all went down? Are there different options apart from this? Maybe the ladies fill out some sort of sexual preference form instructing him on what particular area they'd like him to focus on. Because I'm no expert, but I have a hard time believing all of those 1950s housewives would be so willing to let anything in their rears, let alone a complete stranger's deformed fingers. (And they're not exactly small fingers, by the way.)

And with that, I'm never going to be able to look at lobsters or Spock in the same way ever again.

At least we're all in this together though, right?