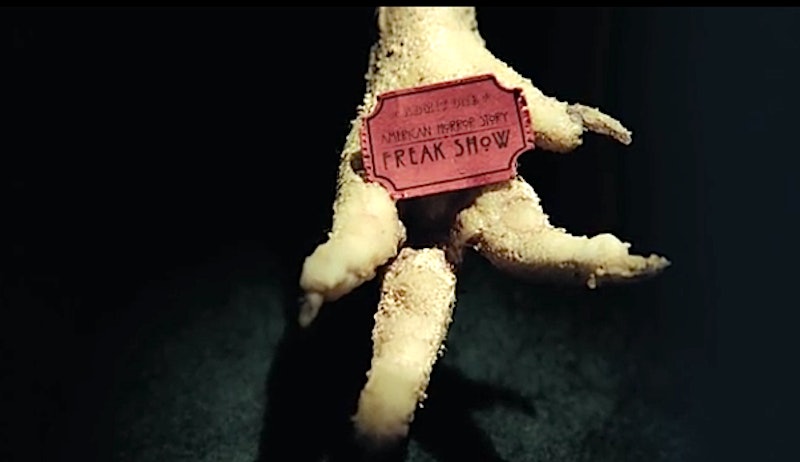 There’s no business like Freak Show business! Ever since Ryan Murphy first announced the title his latest creation, American Horror Story: Freak Show , fans of the popular FX anthology have been dying to know what horrors lie in store when AHS Season 4 premieres. We know Freak Show will be set in 1950s Jupiter, Florida and that Jessica Lange will play Elsa Mars, the manager of one of the last remaining freak shows in the United States. We know several of the cast members’ identities, which include the “worlds smallest woman” and Sarah Paulson playing conjoined twins Bette and Dot. We know it’s going to give us a whole new set of psychological nightmares that not even the world's best therapist could possibly undo. What we didn’t know was when all of this madness would be occurring… until recently, that is.

Thanks to a recent batch of AHS: Freak Show teaser promos, we now know exactly when we can expect to get our freak (show) on. Get those DVRs ready, folks, because Season 4 will officially premiere at 10 p.m. (ET) on Wednesday, Oct. 8. However, for TV addicts like myself, this still feels like ages away, which is why I’ve come up with a few helpful tips to make the time go by faster. Just follow these four easy steps and it’ll be October before you know it.

Murphy promises that Freak Show will be less campy than Coven and more along the lines of the dark and twistedness we saw during Asylum. So what better way to embrace the madness than by going back to the horrifying halls at Briarcliff? At the very least it will get you in the right frame of mind for Season 4. After all, if we can handle demonic nuns, Nazi doctors, and murderous Santas then surely we’ll be able to handle anything Murphy throws at us… right?

Work On Perfecting Your German Accent

One of the first spoilers we found out about Freak Show was the fact that Lange was working on developing a German accent for her role. And given how superbly the actress has tackled accents in the past, clearly this is going to be amazing and something we should all aim to imitate. Plus, if you’re ever not trying to be more like Jessica Lange just in your daily life in general, then you’re doing it wrong.

Granted, this idea isn’t going to go over too well with your loved ones, but the way I see it, this could serve as your own personal form of therapy. We’ve already established that Freak Show is going to be downright terrifying, so why not use what little free time you have left to be the perpetrator of fear rather than the victim? A few harmless pranks will leave you feeling in control and ready to tackle whatever horrors Season 4 brings.

Easily considered to be one of the highlights of Asylum, "The Name Game" delivered just the pick-me-up fans needed in what was otherwise a very dark and depressing season. The clothes, the singing, the dance moves — it’s enough to get anyone up off their feet, which is exactly what you should do. Get a group of your closest friends together and learn the steps to this now-trademark routine. You’ll be the hit of any party. Plus, it gives you a great excuse to watch this clip a hundred more times. You're welcome.

More like this
'Succession' Season 4 Will Be An "Absolute Banger" According To Cousin Greg
By Bustle Staff
'Ted Lasso' Season 3 Might Be Its Last
By Zosha Millman and Grace Wehniainen
A 'Zoey 101' Sequel Movie Is Coming
By Jake Viswanath
'Tulsa King' Season 2 Could Kick Off A Larger Universe Like 'Yellowstone'
By Grace Wehniainen
Get Even More From Bustle — Sign Up For The Newsletter
From hair trends to relationship advice, our daily newsletter has everything you need to sound like a person who’s on TikTok, even if you aren’t.