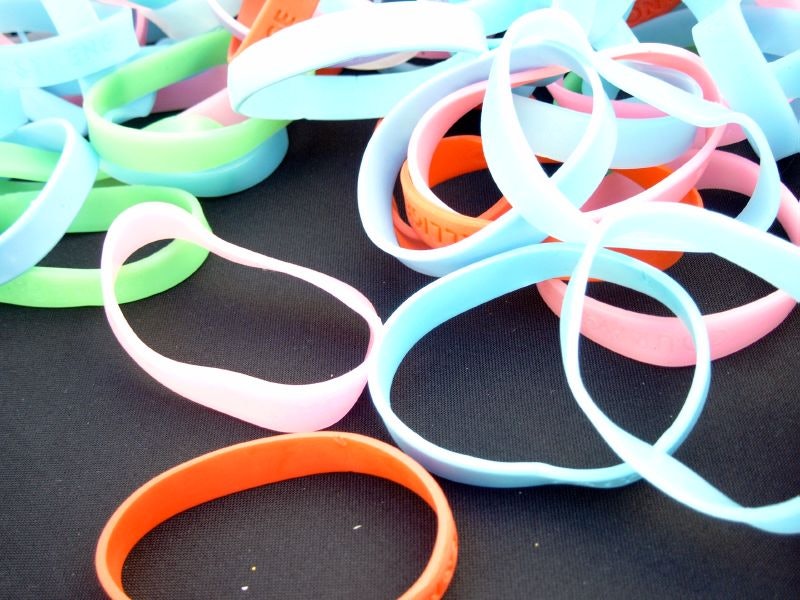 Do you remember the days when teenagers sported gel wristbands of every color of the rainbow up and down their arms? Heck, adults were in on it too, they just showed a little more restraint when it came to quantity. It was very wide-reaching trend when you think about it: They stretched across generations, class barriers, genders. They were near-universal, which is more than you can say about most flash-in-the-pan hits. It was just around a decade ago when things really started to heat up, and the era of the silicone wristband lasted a few years... but now they're little more than a distant memory.

These colorful little bands really took off after the Livestrong bracelet (created in conjunction with Nike) was released back in the spring of 2004 — AKA back when people actually still respected Lance Armstrong as a human being. Fun fact: They actually still make Livestrong bracelets (did you know that? I didn't know that) — only, now they make them without the word "Livestrong" on them because of Armstrong's whole fall from grace and everything.

Nowadays, the gel wristband registers as barely more than a blip in our collective consciousness, but back in the day? They were actually quite the It item for a couple of years there. I remember being the hero of my Saturday morning Japanese school back when I was 12, because my mom managed to scrounge up a Livestrong bracelet for my Secret Santa (it was the very last one after a rare re-stocking at Sports Chalet). They were big: Celebrities wore them (a pre-downwards spiral, Mean Girls-era Lindsay Lohan even wore one to the Teen Choice Awards), athletes wore them — and politicians wore them like crazy. Case in point:

Suffice it to say, they were kind of a huge deal, because what could possibly beat spending a dollar to very publicly display how good of a person you were? The combined pull of showing you cared about cancer and simultaneously following the biggest trend of the year — well, it created quite an allure around the otherwise innocuous wristbands.

And as such, they inspired a lot of copycats. First, following in Livestrong's footsteps, a lot of the bands supported different charities. Benevolent enough, eh? But from there on, the causes grew less and less nobly intentioned — at one point, they even became a part of that infamous battle for The Tonight Show, with fans proudly sporting orange "Team Coco" wristbands. Sure Conan O'Brien was wronged (and apparently, he's still mad), but Team Coco's a far cry from the prostate cancer the bands were originally created to support.

The next stop, of course, was the commercial: Some clever ad campaigns started giving them away, effectively making people walking advertisements! Because if the band was cool enough (and high quality enough), people would wear them, regardless of what they meant. I got an amazing halfway clear, halfway opaque band for free on the beach in middle school, and I wore it with pride for months. Months — and didn't really know or care what I was advertising.

Eventually, we got to the point where South Park even did a full episode dedicated to lampooning silicone cause bracelets ("A Scause for Applause"). I mean, come on: you know you've made it (and subsequently become passé) when South Park does a parody on you. Take, for example, their High School Musical episode, their Bennifer episode — even their Tom Cruise-is-gay episode.

That episode (which aired back in 2012) may have put the last nail into the coffin of the long-forsaken silicone bracelet.

People have tried to resurrect them (and why not? They're a huge moneymaker), but it looks like a trend that just won't be coming back — at least for now. Last year, a British couple tried to repurpose them as a sort of wearable relationship status (ugh). Fortunately, that awkwardly misogynist take on the gel wristband decidedly did not catch on.

Although we quite luckily don't have My Single World wristbands around, when you think about it, in some forms, the silicone bracelet has lived on — it's just evolved (or perhaps "mutated" is a more appropriate word here). Remember when Silly Bandz were all the rage back in 2008? And now, we live in the age of the super-viral Rainbow Loom — though now that I'm thinking about it, even loom bands seem like they might be on the way out now. So what's next? Which seemingly innocuous band of silicone will reign terror on us all in 2015 and beyond?

More like this
All Of 2023's Biggest Nail Art Trends, According To Top Manicurists
By Jordan Murray
'Love Island's Will Got A Farm Animal Manicure & It's *Adorable*
By Sam Ramsden
J.Lo's Micro-French Manicure Has A Fun, Sparkly Twist
By Olivia Rose Rushing
Aerie’s Curve-Hugging Offline Leggings Will Give You A BBL In Seconds
By Bella Gerard
Get Even More From Bustle — Sign Up For The Newsletter
From hair trends to relationship advice, our daily newsletter has everything you need to sound like a person who’s on TikTok, even if you aren’t.