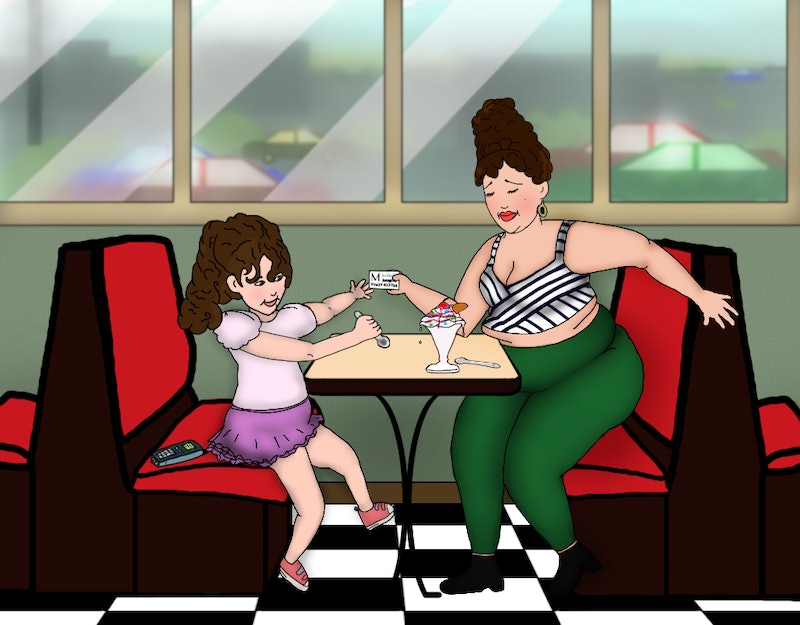 "With age comes wisdom" — or so people seem to think. I don't know how much I truly believe it. Sometimes I find myself looking back at my preteen self, and analyzing the curiosity I seemed to possess — the open eyes and open heart that convinced me that Shrek was real and that Princess Diana didn't really die (I was sure that fairies had staged the disappearance so she could be their queen). That being said, there are so many things I wish I'd known as a kid. If I could travel back in time, and talk to my nine-year-old self, there is so much I would want to tell her.

We sometimes forget how difficult childhood truly is. As adults, our problems are somehow "bigger" than those of the kids around us. We become so involved in our financial woes, in our problematic relationships, in our student loans or mortgages, that we forget how horrible it was to deal with a school bully. We forget how tragic it was to fall in love with a boy who would never love us back. When it comes to women, no matter our age, someone will always tell us that our concerns are petty. But they're not — and they never have been.

But that's just one of the many things I would tell little-me. There's plenty more.

I won't lie; there will always be drama. But you know that girl who put the bubble gum in your hair, or the one who told that secret she swore she'd take to the grave? You won't have to put up with them for your whole life.

turns out some boys are actually nice

Being chunky or overweight isn't a death sentence

People will often tell you that being fat will automatically sentence you to diabetes, high blood pressure, obscene cholesterol levels, and premature death. These people don't always know what they're talking about. Everybody is different — but if you treat yours well, giving it the nutrients, exercise, and the self-love that it needs, you'll be just fine — no matter how many cupcakes you eat.

Nor does it make you any less beautiful

No matter what anyone says — and no matter what the number on the scale says — you are beautiful. Your figure (all those chunky bits included) are a part of that beauty.

Don't stress out too much over getting the perfect grades

Contrary to what your teachers (and probably parents) might tell you, the grades you get in high school will not automatically affect the rest of your life. The grades you get in college won't even do that. I'm not saying you shouldn't try to do well, but that C+ in chemistry will not equate to a lifetime of failure.

You'll probably read a lot about anatomy and the inner workings of the opposite sex, but those "weird" desires you get to bite your toenails, examine someone's testicles thoroughly, or understand the inside of your vagina won't go away. Go with it.

After you hit 18, days will start vanishing. One moment you'll be saying goodbye to your friends at the prom, and the next you'll be filing your taxes. And it only gets worse after college. So seize every moment — the good and the bad — because otherwise you will regret not doing all the things you wanted to do ... like roller blading in the wee hours of the morning.

no matter what, some people will always loathe you

There will always be people you don't click with. Sometimes you'll like them, but they will hate you. Sometimes it will be the other way around. Either way, it's perfectly normal.

It won't make you happier, and in the end, you'll find that you've lost an integral part of yourself. You might also find that by leaving "uncool" friends behind for your social gain, you'll have sacrificed some pretty special relationships.

being a bit weird is actually pretty cool

So much of childhood and adolescence revolves around making yourself appear "normal." But as you grow up, you'll realize that there really is no such thing — and that individuality is what makes you cool.

you will meet people who adore all your quirks

Someday, all of the things you thought were weird about yourself will be the things someone falls in love with. You'll know someone cares about you when they let you be yourself.

And those same quirks and weirdnesses? they might actually lead to getting a job

It is perfectly possible to live with pain

Bad things will happen — even tragic things. You might be betrayed by that cousin everyone always warned you was sneaky. A close relative will pass away. Those really bad things never stop hurting, but you will learn to live with them.

People say this so much that it starts to lose its meaning — but it's actually true. Every breakup, every loss, every low will instill some kind of lesson. And one day, you'll be able to share those lessons with someone else.

money isn't everything, but it does matter

Your dad will have told you many times that the most important thing to strive for is wealth. He's wrong — and you will spend many years trying to prove that money isn't important. It is important, though. Financial stability is a worthy thing to strive for; just don't let it consume you.

Once in a while, a drink will help a situation

You've been taught it's wrong to turn to food or drink in times of need. But sometimes, it will help. And that's totally fine, as long as it doesn't become a crutch.

try not to fear the unknown

Part of growing up is making mistakes. But the fear of those mistakes should never get in the way of experiencing life. You will smoke something mysterious or drink far too much at a party, but these moments are a big part of discovering your limits. And contrary to what your health teacher will tell you, smoking a joint once will not lead to heroin addiction and subsequent death.

...But trust your instincts

If your gut is telling you that someone isn't such a good egg, that your body can't handle something, or that you probably shouldn't walk home alone at 3 a.m. after a party, you might be right. Trust your sixth sense — even when it's not the "cool" thing to do.

Independence is a gift

Cultivating self-love and self-worth are more valuable than I could ever express. The knowledge that you can fend for yourself, and pick up your own pieces, will always help you out.

...But having people to count on is key

Nothing beats knowing there will always be someone there for you. This could be a relative, a friend, or a lover. Having that one person will always be enough.

no matter how old you get, some people will continue to be horrible

People will always do terrible things that shock, awe, and disgust you — but the fact that it'll always surprise you is a good thing. It means you're not totally cynical.

Remember that time you texted a picture of your boobs to some kid didn't know, who you probably met on AIM? Maybe don't repeat that. Be careful with the personal information you share, because even though technology is a wonderful thing, it's also a scary thing.

remember to value your solitude

There will come a point when you crave absolute solitude — when you wish that social media didn't consume so much of your life and that you could just be alone. But being alone will become progressively more difficult as technology develops, so try to cherish every second you do get to yourself.

Just to confirm what you already knew, your parents don't have it right all the time

They don't have all the answers, and sometimes they will get it horribly wrong. At some point, they will try to tell you, for instance, that not going to Sunday mass will equate to the destruction of all your dreams and aspirations. That's just a lie.

But once in a while, they do

A few of those times that they seemed a bit too strict will have actually been for a good reason. And in the end, it will have possibly prevented something pretty bad from happening. Like when your mom refused to let you meet up with that guy you met on MySpace, and a few weeks later he was in the newspaper for trying to seduce local girls. He was actually 47.

Leaving home will actually be a scary thing

Saying goodbye is never easy, no matter how prepared you think you are. You'll miss your mom's cooking, and the comfort of the bedroom you grew up in. The grown-up world will be scary and hard and peculiar at times. But it has to be done.

nothing will ever beat exploration and travel

There is no better teacher — or better use of one's time — than travel. Getting to know people from different places than you will do a world of good. Study abroad, and travel as much as you can, while you still can.

Often, it's the things we're not expecting that lead to the most memorable moments. Like when you planned to go on the school-sponsored tour of Madrid during study abroad, but chose instead to ditch it with your house mate and go to a cafe bar — and ended up meeting the love of your life!

you are the only one who can determine your worth

People will try to tell you that you aren't good enough, pretty enough, or strong enough. But you will prove them wrong — you will learn that the only person who can determine these things is the person staring right back at you in that mirror.

And last but not least, don't be afraid to believe in magic

Sometimes it'll seem like the universe is trying to rid you of all the wonderment and curiosity in your heart. But don't let it. You might not always believe in fairy tales or stupendous creatures, but just because something seems impossible doesn't mean it is.