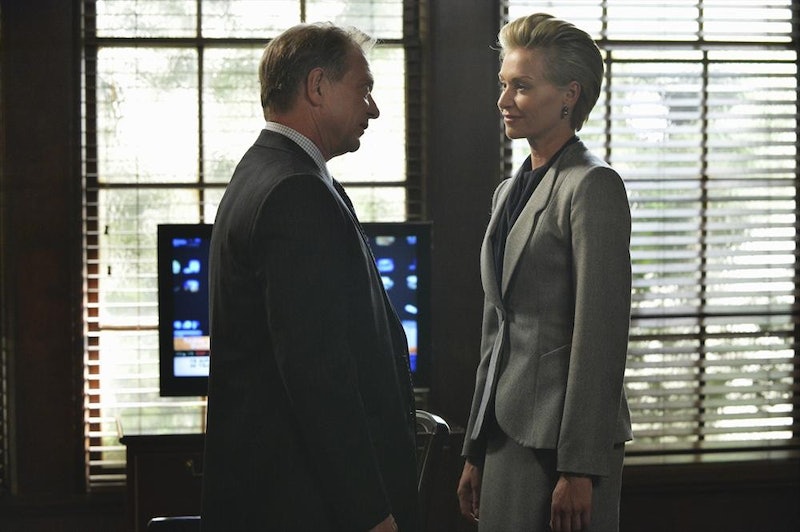 There are a lot of reasons to celebrate Scandal's return, and not all of them have to do with getting the chance to see Scott Foley shirtless again... although that's definitely a plus. Another season means casting shakeups — saying goodbye to old series regulars (RIP, Harrison) and meeting new faces. Now that we're all settled with Scandal Season 4's Lizzie Bear (Portia De Rossi) as the head of the RNC, my fingers are crossed that she decides to stick around for awhile. Because De Rossi's not just bringing new life into the Oval Office — she's also the very first person who has ever been able to give Cyrus Beene a run for his money.

OK, so Liv has gone toe-to-toe with the White House's Chief of Staff many times before, and we all know that Mellie has never been known to bite her tongue anytime Cyrus has ever pissed her off. But Lizzie? She's obviously ready to take Cyrus head on, and I absolutely love it. As fantastically devious as Cyrus is, someone who can best him has to be a complete mastermind, and I have no doubt in my mind that Lizzie is capable of getting shit done.

The bad news: Cyrus is in for a world of pain.

Exhibit A: The whole "whoops, I'm a prostitute" encounter with Cyrus and the mega handsome guy from the end of last week's episode, "Off The Cuff." That was totally Lizzie's doing. Normally, I would've expected Cyrus to have seen right through a scheme like that, but this time, he was totally blindsided — and admittedly, so was I. However Lizzie managed to pull that off, she deserves major props. OK, yeah, it was a terrible thing to do, but this is Scandal, and that move was seriously impressive in the world of Scandal. She doesn't want David Rosen to become Attorney General, and if Cyrus is going to stand in her way, he had better prepare to be forcefully moved.

The remaining question is this: Would Lizzie take it so far that she'd try to usurp Cyrus and take over the role of Chief of Staff herself? I don't doubt that she'd try, although what I do doubt is that Fitz would let anyone else fill Cyrus's shoes. Despite their relationship issues in the past, Cyrus is obviously like family to Fitz, and I don't think Mr. Beene is going anywhere.

But neither is Rossi. I wouldn't be surprised if De Rossi stuck around for the rest of the season, though. And I hope I'm right; I love seeing the wheels turn in Lizzie's duplicitous mind, and I think there is a lot of potential for amazing story lines there.