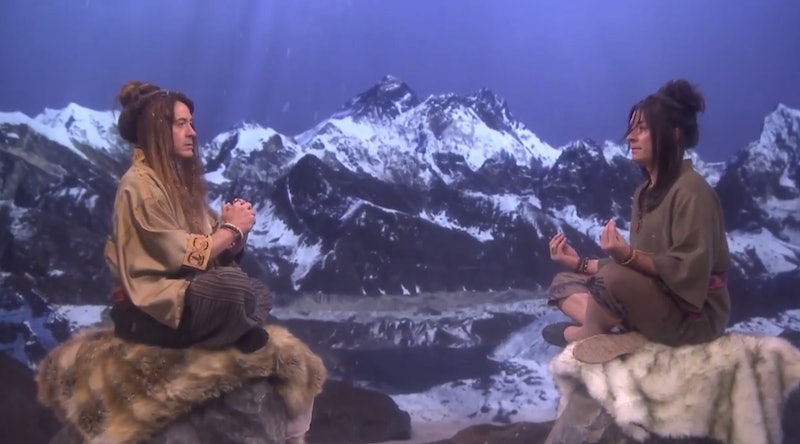 Of all the things that Robert Downey Jr. was best at — y'know, being a rockstar, being the closest to a real-life Tony Stark we're ever gonna get, etc. — I've always thought acting was at the top. But, after watching this clip of his Wednesday night appearance on The Tonight Show Starring Jimmy Fallon, I can confidently say I might have been mistaken: Robert Downey Jr. is even better at staring.

What led me to this conclusion? Simple: Fallon (who has successfully transformed The Tonight Show into one of the funniest late-night shows thanks to out-of-the-box, SNL-in-its-heyday skits like these) and Downey are engaging in an "intense staredown" from the very start of the clip, complete with full spiritual-dude costumes, long-hair wigs, and a green-screen backdrop depicting a snowy mountain setting. Downey and Fallon then begin their intense staredown — complete with hilarious voiceovers from the two dictating "wise quotes," and even better facial expressions.

Anyway, it'll probably make you love Downey more the second you watch it, so you should be prepared to get some major feels when you hit play on that clip right down there. But it's OK — just know it's worth it.