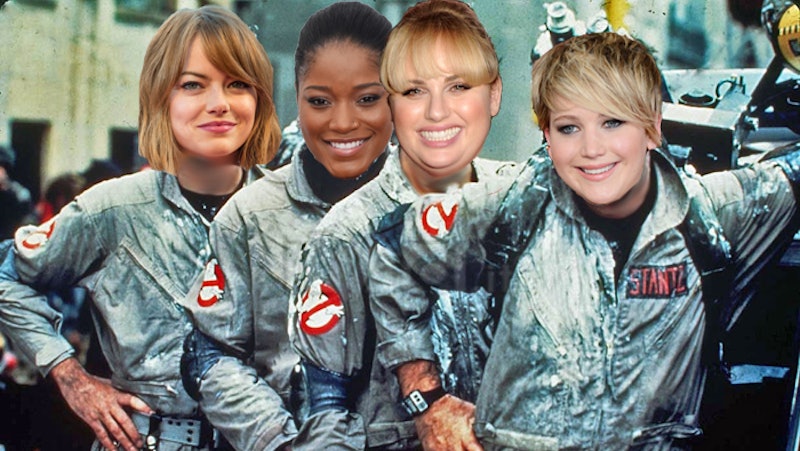 The news is out and the celebrations have begun. Just the fact that there is going to be a third Ghostbusters movie would have been enough of a surprise to fans of the 1984 film, but the announcement that Ghostbusters 3 will have a female team should have practically been a cause for parties in the streets. We don't know anything more about the movie other than that it's happening, as there's no plot, no script, and definitely no one cast in the Ghostbusters lead roles yet, but that won't stop me from dreaming. Especially in the wake of Jennifer Lawrence admitting she's afraid of ghosts — it's like fate is begging her to suit up and start hunting them to get over that fear.

But J. Law isn't the only actress I can see filling out that suit with style and aplomb. According to Paul Feig, they're looking to cast some "hilarious women" on this new female team. That description covers a lot of actresses out there, so it was hard to narrow it down to a team of four. So I cheated. Here's the Ghostbusters 3 cast as I envision them as well as a second cast of Ghostbusters-in-Training. After all, Dan Aykroyd did once say that a potential Ghostbusters 3 script would feature a new generation of Ghostbusters who would need to be trained by the old generation. And look how well these actresses can rock these suits.

Who you gonna call?