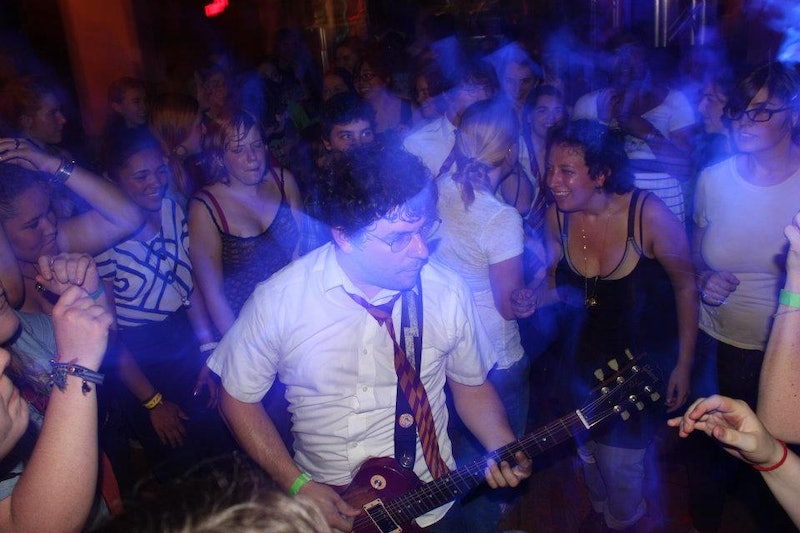 My first concert came at the hand of wizard impersonators. I was 15, it was the era of Myspace, and a friend invested in all things indie music but not Harry Potter, had turned me onto a new genre of music that was being spearheaded by a band called Harry and the Potters. I forgave the blasphemy of her continued disinterest in Harry Potter momentarily, because this band sounded like the greatest thing that had ever happened. Also because she promised to bring me to a show that featured not only Harry and the Potters, but also their fellow Wizard Rock band, Draco and the Malfoys.

That first show, at SE Portland's Acme bar in the summer of 2006, was the most unique thing I'd ever seen. Impersonators of famous literary characters were wailing away songs called things like "Save Ginny Weasley" — as in, from the basilisk — and "In Which I Kick Harry Potter In the Face." And the place was packed, with the widest age range of enraptured audience members you'll ever see anywhere. How the hell did this happen? What ripped somewhere on the space-time continuum that allowed this little bit of cultural oddity to slip through?

One of the most enduringly astounding things about the Harry Potter phenomenon, to me, is not how much money the movies made. It's not even that Harry Potter fans still collectively freak out whenever J.K. Rowling decides to revist Harry — though that's a testament of its own. It's that Rowling may know the facts of her success, but I find it hard to believe any one person has the capacity to process when their influence stretches as far as hers does. Does she know what she did? She created an entire economy out of her imagination.

The books and movies may be over, but the markings of Rowling's influence are still written all over our culture, from the mainstreaming of fandom culture to the many (many) professional nerds she enabled to bust into the public sphere and join or create their own dynamic nice communities. If there's ever been a body of work that's proven that the personal, the political, and the cultural are all inexorably, complexly, and intensely intertwined — and that that overlap is one of the most powerful things we have — it's the work of J.K. Rowling and everything it's wrought.

In case it hasn't become clear by now, I have long been a die-hard Harry Potter fan. I chose my college based partially around whether or not it had a quidditch team — I didn't join, but I knew it meant my people would be there. I taught a class on Harry Potter for two years, I co-chaired a chapter of the Harry Potter Alliance nonprofit in my senior year and recently joined the main organization as part of their volunteer staff. I wrote my college admissions essay on Wizard Rock (sample line: "There have been very few constants in my life, but there is this."), so I should probably thanks Harry and the Potters and that 2006 concert for getting me into Oberlin. I've gone to a Harry Potter convention, I've snuck into a shopping mall at 4 a.m. to wait in line for one of the movies. I've gone to bat for my love of that world, basically, and it doesn't show signs of stopping.

But it's not the stats of my personal fandom that cut deep: It's that, when I look around at my life, a startling number of the people I love the most in this world came to me through Harry Potter. Our shared love gravitated us towards each other, and it just stuck. My life surrounded by these people is hardly Harry Potter 24/7 — we talk and fight about anything and everything any humans talk and fight about. But it's a surprisingly great common ground.

When I look at the phases of my life so far, the ones where I have most thoroughly felt at home in myself — where what was laid out in front of me seemed most viable and lasting — have been the ones most heavily marked by Harry Potter and the people it brings out of the woodwork. And the most striking thing to me about everything Harry Potter is that I know I've never been alone. It's one of those times where it's a really big relief to know you're not at all unique in your experiences. There's half a generation right there along with me.

Friday, October 10* is the ninth anniversary of the Harry Potter Alliance, an organization whose mission statement revolves around using the personal, cultural, and political impact of storytelling to do real-world good. Their annual fundraising efforts are going on as we speak. The fact that an organization founded in the height of Harry Potter mania is still going strong years after Deathly Hallows, Part 2 hit theaters and supposedly ended an era is a testament to what it means to be a contemporary die-hard Harry Potter fan. We haven't gone anywhere, we've simply expanded our interests. Now we're arguing about which Hogwarts house Katniss Everdeen would be in; we're still trying to solve Rowling's anagrams; we're race-bending the series on tumblr. A study this year told us that Harry Potter 's made us more tolerant, but that's something we've known for years — it's embedded in the millennial relationship to social justice.

Harry Potter is personal — it's an anchor, something that's gotten a lot of people through a lot of really shitty situations. It's cultural — that part's obvious enough. It's political — isn't everything? I've loved Harry Potter for over half my life, and the Harry Potter Alliance's ninth anniversary is just serving to remind me: This isn't over. I'm not even sure something like this is capable of ending.

*UPDATE: This post initially said the birthday was Thursday, Oct 9. It's actually the 10th. But isn't every day a Harry Potter anniversary in our hearts?Images: Alanna Bennett; Getty Images