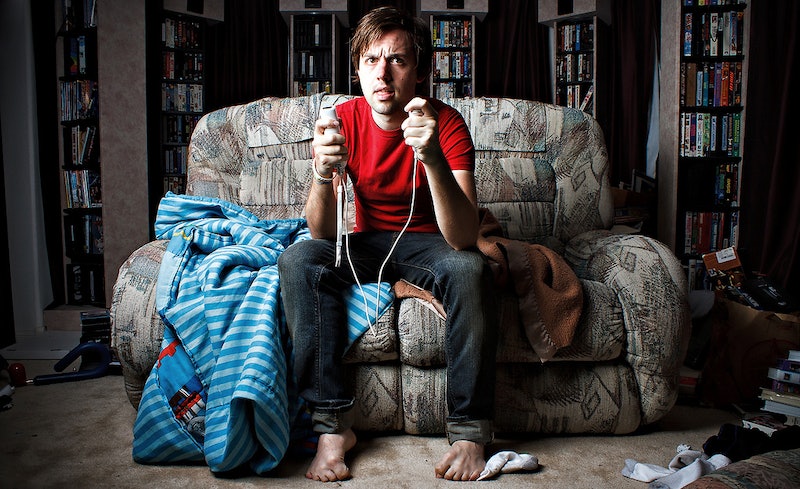 That Pew report from September that suggested declining marriage rates might be due to a lack of marriageable men sure did end up opening a can of worms, didn’t it? Case in point: We now know where the most immature men in the U.S. live, thanks to real estate site Estately. Isn’t data analysis fun?

Estately’s number crunchers gathered data for six different metrics in order to determine how mature the men are in each state in the country. Those six metrics were:

After ranking each state based on those pieces of criteria, Estately then averaged the numbers to come up with an ultimate ranking of how mature men in each state are. And the top ten states for the most immature men are…

Not going to lie: It’s sort of interesting to see which factors each state scored highest and lowest on. Rhode Island may not be as into fantasy football as some other states, but it took first, second, and third place for Family Guy, beer pong playing, and unemployment, respectively—which is probably what placed it at the top of the list for Most Immature Men in the Country. Meanwhile, North Dakota, which took number four on the overall ranking, has the lowest unemployment ranking of them all (50) — but came in third for fantasy football and Family Guy. Oh, and Nevada? Ranking eighth overall, it has a lot of unemployed dudes who spend their time playing video games and watching porn — but they don’t tend to play beer pong or watch Family Guy that often. If, however, you’re interested in finding the most mature men, you’re probably best off looking in California, Oregon, Vermont, or Utah, among a few others. Vermont apparently plays the most beer pong in the country (or at least, expresses the most interest about it on Facebook), but eh. Can’t win 'em all. For the full listing, head on over to Estately.

But although the ranking is kind of amusing, I have a few quibbles with both the reasoning and the methodology behind the analysis. First off, I think it’s a bit of a jump to go from “This percentage of people over 25 have never been married” to “This must be happening because dudes are 'increasingly undesirable.'” There are a lot of factors that play into the fact that people aren’t getting married as young anymore — or just not getting married at all — and have the data to prove it. Part of it is money: With the economy the way it is (which, granted, is better than it was a few years ago, but still not terrific), a lot of people just want to wait until they’ve got a solid financial foundation before tying the knot. These days, most 25-year-olds are still paying off student loans and working low-paying jobs because those are the ones available to them. Furthermore, a Pew poll conducted in 2010 showed that millennials in particular just don’t really see the point of getting married anymore.

And what about same-sex couples? Although we got amazing news a few days ago that paves the way for marriage equality in five more states, it’s still (stupidly, I might add) not legal in a lot of places; accordingly, gay men can’t marry each other, which can probably account for a not insubstantial chunk of the male “under 25 and never been married” crowd. Also, lesbian women aren’t going to be interested in marrying men anyway, so again — whether or not the men are “eligible” isn't the only reason marriage rates are declining.

Second off, the data used to calculate the rankings also makes a lot of assumptions, both about the hobbies themselves and the people who engage in them. True, unemployment, fantasy football fandom, love of video games, and all the rest might be symptoms of immaturity — but that doesn’t necessarily mean that they’re actually caused by immaturity. It’s definitely possible for people to be amused by childish things (which, by the way, aren’t at all limited to these six metrics), yet still have the emotional and social maturity required to make a relationship work.

As Bustle’s Emma Cueto noted when the Pew report that inspired this whole “are men just not marriage material right now?” debate came out, at least this time women aren’t the ones being blamed for the problem. The thing is, though? I don’t think declining marriage rates are a “problem” at all, so it really doesn’t matter whose “fault” it is or isn’t. The universe is not going to implode purely because people in one particular location are deciding that maybe marriage isn’t right for them at this very moment. Maybe we should all just stop freaking out about whether or not people are tying the knot; generally, people will make the decision that’s best for them, and that’s nobody’s business but their own.