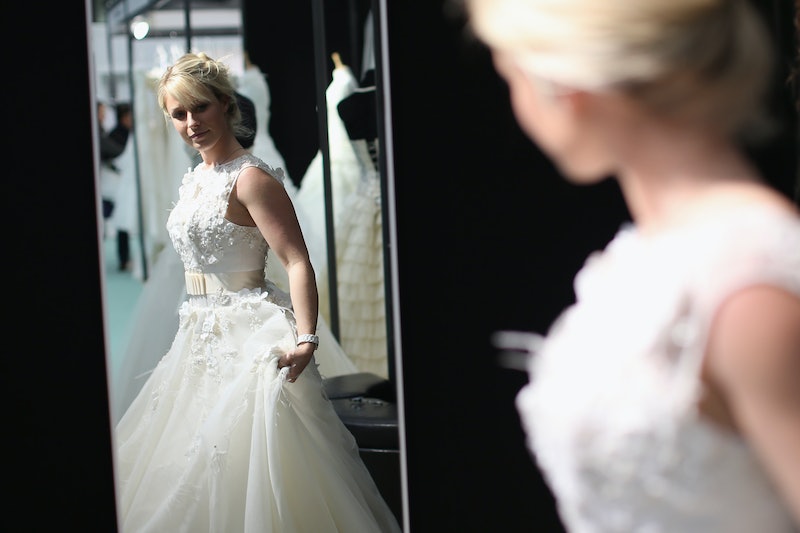 Everyone, quick, check the temperature in hell and scan the skies for airborne pigs because I think we just saw a change in societal norms blamed on straight men. It turns out that, according to a new report by the Pew Research Center, the declining marriage rates we've seen in recent years might be caused by a lack of marriageable men. Men, you say? Straight men, even? Why, we can't blame straight men for something, that's un-American!

Pew Research Center's new research confirmed what we've known for a while — that the number of unmarried adults is on the rise, especially those who have never been married — but also looked at the reasons these never-married people gave for their ongoing unwed status. Among women who have never married, 78 percent stated that when choosing a potential partner it was "very important" to them that this person have a steady job. In fact, it seems to be the most important factor overall, given that more women rated it as "very important" than they did any other potential criteria Pew listed. For men, it was most important that their mates shared "similar ideas about having and raising children."

Unfortunately, given the current state of our economy, that's a big problem for people looking to settle down. Like, a big problem. In fact, TIME estimates it may mean that 25 percent of millennials will just never get married.

Nowadays steady jobs are hard to find for millennials. We are increasingly stuck in low-paying jobs, and are the most likely to not to have paid family leave or sick days. And trying to leave your job and find a better one is not so easy. All of which makes it hard to get married and think about starting a family, and means that women, who have this totally strange expectation that they might be able to marry someone who is financially stable and not going to make their financial lives a complete strain, are probably going to be disappointed. In other words, the declining marriage rate is due to a lack of marriageable men.

Which, I guess, is actually caused by an economy that seems hell bent on making life miserable for young people, but whatever. It's nice to see that people are not blaming women for the changes to traditional social structures for once (until people start saying that our mate expectations are unreasonable, anyway). It's a bold new form of equality. And if there are any men out there who don't like it, I have but this to say: tough.

The truth is that so far women have been the ones taking the brunt of the "blame" for this completely awful new trend of people getting married later which is clearly a trend that will ultimately collapse civilization as we know it or something. It's not just the terrible Princeton Mom telling women they need to focus on finding a husband sooner (instead of, perhaps, telling men they need to buckle down and find a wife). No, it's everywhere, from people claiming getting hitched will solve income inequality to people freaking out over female breadwinners. Any changes to the traditional, 1950s-style family structure and everyone wants to know why women are being so disruptive to the clearly established, "natural," status quo.

Well, haters, the joke is apparently on all of you guys. Because it turns out the real hold-up might be the fact that women actually do want some aspects of that whole 1950s ideal — namely the part that involves financial stability. Which in the modern world tends to require two incomes. Unfortunately, due to the state of the economy, the dudes of the world can't really guarantee that they can provide their share.

Obviously, most women in the modern world probably aren't looking for some guy with a steady pay check to come take care of them. We have our own careers, and hopefully our own savings. But in a world of uncertainty and economic instability, it would be nice if we could find a partner who was financially stable. Is that really too much to ask?