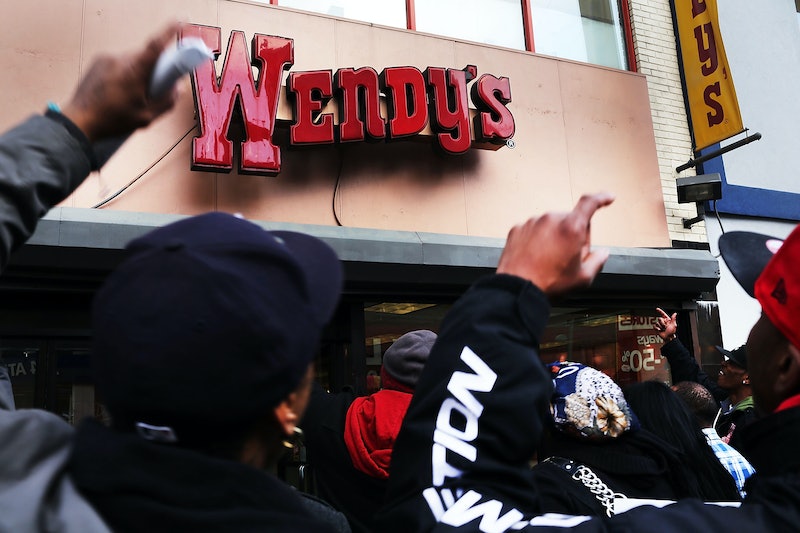 On Thursday, fast food workers in about 50 cities are planning a large-scale walk out to protest their low wages. Organizers are expecting the largest nationwide strike as burger slingers, cashiers, and other fast food employees around the country take to the streets in hopes of getting their employers — chains like McDonald's, Taco Bell and Wendy's — to increase their wages.

The calls for change started last year with a series of walkouts in cities like Chicago, Detroit, and Seattle where workers asked their bosses to increase their wages to $15 per hour, or about $31,000 per year. Right now, many fast food employees get paid minimum wage which amounts to $7.25 per hour, or $15,000 per year.

The movement has continued with demonstrations by food service employees continually springing up as recently as this past July. Fuel was added to the fire when McDonald's released a "sample budget" to help its low paid workers stretch their dollars further. The budget included allotments for a second job, but left off major line items like groceries and childcare while underestimating the costs in many parts of the country for huge expenditures like rent.

Many workers and their supporters say that $15,000 per year is simply not enough to live on, especially when their shifts at the restaurants preclude them from getting a second job.

Fast food companies including McDonald's and Burger King have responded to the protests by reminding workers that in many cases, the larger corporation isn't the one setting the salary; smaller franchise owners are. And for the shops that the corporations do run? The National Restaurant Association says that the low pay is reflective of the fact that many fast food employees are young and have little experience.

Higher wages are not the only issue at hand. Workers also want the right to form a union to fight for their best interests.

The White House has called for an increase to the minimum wage, to about $9 per hour.

More like this
Which Cast Member of 'Westworld' Season 4 Has the Highest Net Worth?
By Meg Walters
'The Capture' Is Finally Back – & S2 Looks Tense AF
By Sophie McEvoy and El Hunt
The Lionesses Are Calling For Equal Access To Football In Schools
By Sophie McEvoy
Scotland's First Period Dignity Officer Is... A Man?
By Darshita Goyal
Get Even More From Bustle — Sign Up For The Newsletter