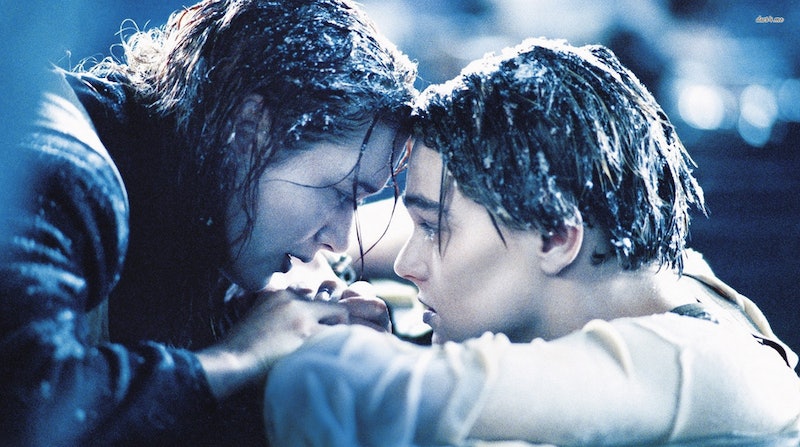 Was it really sixteen years ago that Titanic came out? Jack and Rose were the original Noah and Allie, a poor man from the cool side of the tracks who falls in love with a redheaded rich girl who's way out of his league. However, it's universally agreed nowadays that Titanic was a pretty bad movie. Most of us were only there for Leonardio DiCaprio and/or the car sex scene that our parents wouldn't let us watch until we were older. Titanic was released on special edition DVD in 2005 and apparently that DVD release came with an alternate ending, one that didn't make its way onto the Internet until now. And the Internet is reeling. Why? Well, the alternate ending to Titanic is really, really bad, that's why.

Instead of finishing her tale of woe to the crew of the Keldysh and then quietly walking off to drop the Heart of the Ocean into the water, Rose as an old woman is stopped by the crew. She then proceeds to give them a heavily cliched speech that sounds like every piece of advice your grandmother ever gave you stitched together with a few inspirational posters. And then she drops the necklace in the ocean anyway. I think I'll stick with the original ending over the alternate ending, thank you. However, the option of ending the movie a little differently is too alluring to resist. Here are seven alternate endings to Titanic that would have made the movie so much better.

1. Jack died while the ship was sinking.

One of the biggest criticisms about Titanic is Jack's death. Not just that it happened, which tugged at our heartstrings even back then, but the fact that it seemed so avoidable. After all, as many have pointed out in the past, the raft that Rose was lying on was more than large enough to carry both of them. Handwaving it away as not being buoyant enough was a cop-out for a raft that size. Instead of Jack's senseless sacrifice of the raft that led to his hypothermic death, a better ending would have been for him to go down with the ship. At least that would have made sense.

Or, you know, Titanic could just save us all the heart break and not let Jack die at all. Jack and Rose's love was so true, you guys. He drew her like one of his French girls. How could you rip two people apart so cruelly? I want a redo.

3. Jack and Rose die together.

After all that talk about "you jump, I jump", Rose took up the whole of that raft and left Jack to a freezing, watery grave preeeeetty easily. All right, so that's a little unfair, but a more satisfying ending would have been for the two lovers to die together. At least then I wouldn't have to cry over one of them being forced to live without the other. Then again, who would tell their story?

If we're changing the ending, then we may as well change history. Don't let the boat sink. I won't mind, James Cameron. Really, I won't. What's historical accuracy matter when you could save the lives of all the people on that boat?

5. She doesn't drop the necklace into the ocean.

Even in the new alternate ending, Rose still drops that beyond expensive, beyond valuable, beyond irreplaceable necklace into the ocean. Why? Why would you do that? If this ending is really going to get alternate, then she should have just kept the Heart of the Ocean. All of us would have kept it.

6. It all turns out to be a really bad dream.

Or a really bad movie. I mean. What? All I'm saying is, this is one plot that I wouldn't mind discovering was all a nightmare that Rose was having as she lays in the circle of Jack's arms, years later, having survived the wreckage of the Titanic.

7. Elsa shows up and freezes everything.

Yes, yes, I know that Titanic came out 16 years before Frozen did, but just take a moment to imagine this. The Titanic is sailing somewhere with icebergs and Arendelle isn't technically a real country with a specific location, so who's to say the boat wasn't passing nearby it? Elsa could have been the hero of that film by freezing that entire ocean so people could walk to land, is all I'm saying.

Check out the alternate ending below.