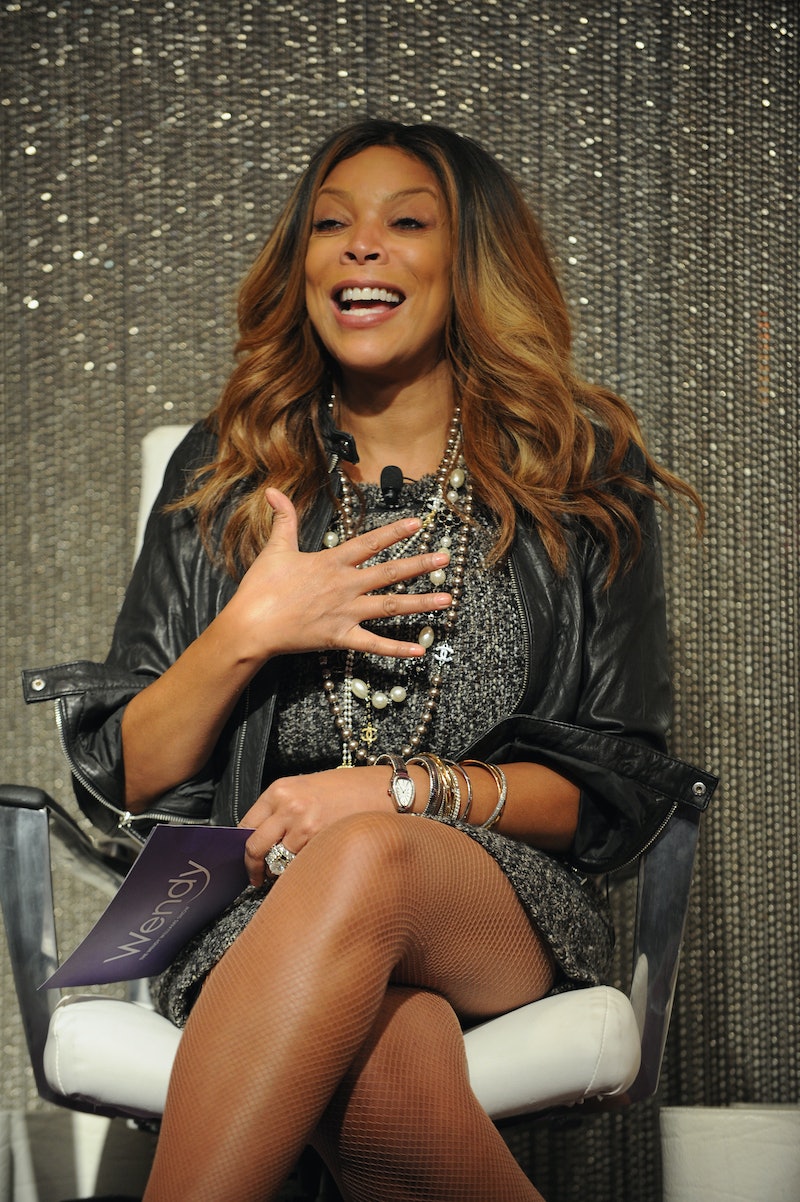 Wendy Williams, you better rein it in. On her Wednesday show, Wendy Williams addressed Jennifer Lawrence's interview about the nude hacking scandal in the November issue of Vanity Fair, and Williams' words were horribly harsh. She read Lawrence's response in which the 24-year-old actress said, "It's my body, it should be my choice, and the fact that it's not my choice is absolutely disgusting." The audience applauded for Lawrence's brave words, but Williams immediately cut Lawrence down, saying, "Um, it's not your choice. It's in the cloud, and I've looked several times."

Though this elicited laughter from the audience, Williams' admittance to looking at the photos and putting the responsibility on Lawrence just furthers the victim-blaming that the Hunger Games star (and so many other female stars in Hollywood) have faced. She makes light of the incident, even asking the audience to clap if they've looked at the nude photos (many people do), or to clap if they're lying about not having looked (there's applause for this too). Williams seems to think that the photos are public property because Lawrence took them and they are "in the cloud." Does she know what that means? Storing your data in a cloud software does not mean that you are surrendering your right to privacy. Lawrence even says in the Vanity Fair interview that those who looked at the photos were committing a sex crime by exploiting her body without her consent.

But good old Williams totally misses THAT boat, and besides saying that taking the photos in the first place takes the choice out of Lawrence's hands (gross enough as is), she goes on to give this awfully misguided advice to Lawrence: "In my opinion, if she would just stop talking about the cloud and the naked pictures, it'd would go away and we'd all forget about it. Besides, Jen, you don't look bad under your clothes and I think the hackalation has made your career even hotter... so hold your head up with pride."

OK, first things first: "Hackalation?" No, Wendy, that word isn't happening. Second of all, this logic is so disrespectful and demeaning, and it's made all the worse coming from another woman. Nowhere does Lawrence say that she is ashamed of her body, because this is not a question of confidence, it's one of consent, which Lawrence did not give. Plus, the point is not to bury this issue, but to start a new conversation about choice, exploitation, and consent, and to make people think about what constitutes a sex crime.

Perhaps the most damaging comment, though, is Williams plea to Lawrence to "hold her head up with pride" because this incident has furthered her career. It's akin to telling women that catcalling is harmless and should not make them feel threatened. It's so sad that Williams is just contributing to an environment in Hollywood where women cannot feel safe and are treated like public property. It's even worse that this criticism and victim-blaming comes from another woman, destroying solidarity and unknowingly endangering herself, too, by perpetuating that hostile attitude. Wendy Williams, get it together, lest you have to eat crow all over again.

The segment on Lawrence begins at 5:27.

More like this
Amanda Gorman Shared A Powerful Message On Meghan Markle’s Penultimate Podcast
By Darshita Goyal
Wimbledon Alters All-White Kit Rule Amid Candid Period Discussions
By Catharina Cheung and Rachel Mantock
Claire Foy & Rooney Mara Revisit A Devastating Tale In 'Women Talking'
By Bustle UK
The 'Love, Lizzo' Harry Styles Scene Is Just 1 Moment That Made Fans Feel Seen
By Brad Witter
Get Even More From Bustle — Sign Up For The Newsletter