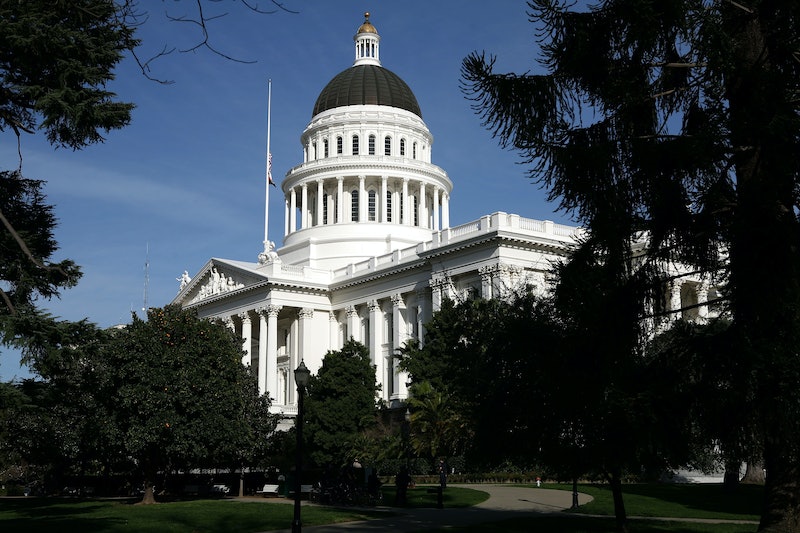 Realistically, we all knew that California's awesome new "yes means yes" consent law was going to have people freaking out and saying stupid things. But there's saying stupid things and then there's saying the law "will actually ruin both good men and good sex." Because yeah, apparently asking people not to rape other people means the end of good sex as we know it. Sorry guys!

This charming position comes to us courtesy of an essay in The Week by a senior political analyst with the libertarian Reason Foundation, Shikha Dalmia, who seems to take two major objections to the law: The first that it will ruin the lives of those poor men who really didn't mean to have nonconsensual sex with anybody and now must suffer the burden of being accurately called rapists. And the second, which is perhaps even more troubling, that sex inherently involves nonconsensual aspects, and that this law will therefore ruin sex.

Laying aside what Erin Gloria Ryan at Jezebel calls the "Won't someone think of the rapists?" attitude here, this article represents a rather disturbing understanding of sex. For one thing, it somehow seems to think that expecting affirmative consent will undo the hard work of the sexual revolution and turn back the clock on women's "sexual actualization." Because obviously people having sex with you when you don't want them to is the ultimate key to sexual liberation. Rape makes people's sex lives better people, didn't you know that?

Dalmia's assumption here, that expecting affirmative consent will interfere with the way sex is supposed to work, is clearly based in the idea that sex is supposed to be at least partly nonconsensual. And I'm not reading things in there; she actually says that.

"The reality is that much of sex is not consensual — but it is also not non-consensual," she confusingly and patronizingly explains. "It resides in a gray area in between, where sexual experimentation and discovery happen."

Um, excuse me? Because I was under the impression that experimentation and discovery happen when you feel like experimenting and discovering. They are active verbs. They involve doing things. Not letting somebody else do stuff to you and then deciding whether or not you liked it. And the article's notion that "initially one has to be coaxed out of one's comfort zone," for anything interesting to happen in the bedroom is not only insulting to women who can decide for themselves whether or not they want to get out of their comfort zone, but also denies women the right to make those decisions.

Ultimately, this whole article is just creepy, painting affirmative consent not as an awesome new standard for judging whether or not to have sex with someone, but rather as some intrusive, unnecessary burden that will spell the end of fun sexy times — while at the same time it glorifies men who have to "convince" women into the sex that these wise male souls know the women want, even when women themselves haven't figured it out yet.

For the record, sex should always be something that both people are into. Sex should be mutual. And that's what makes good sex good sex. As opposed to, you know, sexual assault. And the fact California now has a law that reflects that reality, that forces college campuses to view sexual assault not as rejecting a "no" but as not caring that there was no "yes," — that's a good thing. End of story.

More like this
It's A Pleasure #53: Help! My Boyfriend Won't Tell Me Why He Stopped Going Down On Me
By Sophia Benoit
The 19 Best Tweets & Memes About Bisexual Awareness Week
By Lexi Inks
Wanna Try Hinge's New Video Prompt Feature? Here Are 7 Tips
By Lexi Inks
6 Dating App Tips To Try If You're Looking For A Serious Relationship
By Lexi Inks
Get Even More From Bustle — Sign Up For The Newsletter