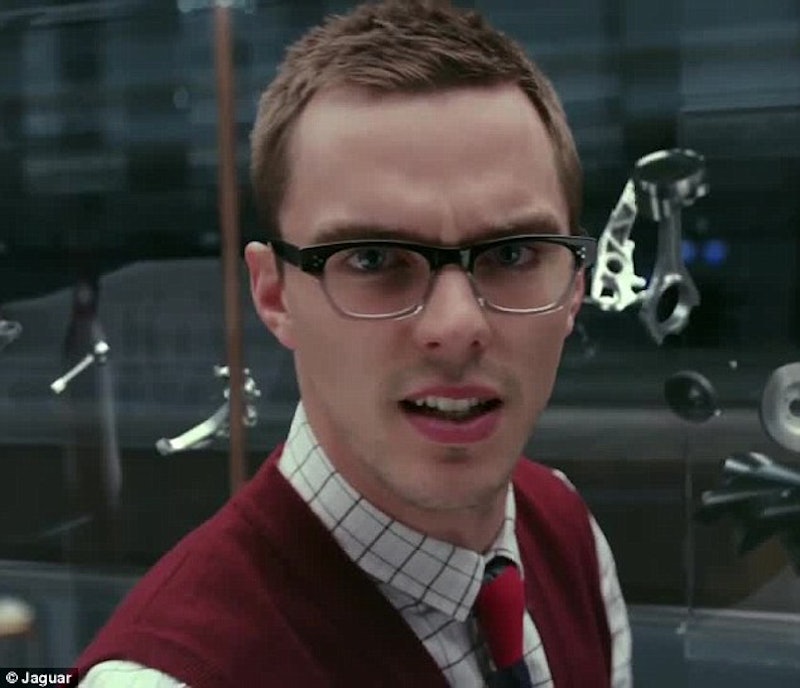 The latest Brit to go bad is Nicholas Hoult in a new Jaguar commercial. The luxury vehicle's "Good to Be Bad" campaign previously starred Tom Hiddleston, Mark Strong, and more actors known for playing popular on-screen villains, but now they've added evil newbie Hoult to the mission. In the new ad, Hoult plays the tech genius behind the operation. Donning glasses and a sweater vest, he explains how the cars are put together to be at their most powerful.

"A villain is only as good — or should I say bad — as the technology at his fingertips," Hoult says in the commercial. "That's where I come in ... Behind every cunning plan there's a brilliant mind." But Hoult is more than just the figure in the background, he's responsible for building everything from powerful engines to buttons that wreak havoc. It's all in a day's job for him. "World domination is an unfortunate side effect," Hoult adds, without a trace of apology in his voice.

His delivery is spot on for an actor who hasn't had a wealth of evil roles. He knows exactly when to pause on words to give them they're greatest impact, and I could listen to him say "aluminium chassis" literally all day. Hopefully this isn't the last we'll see of Hoult's bad side, because now that he's given me a taste of what he has to offer, I just want more.