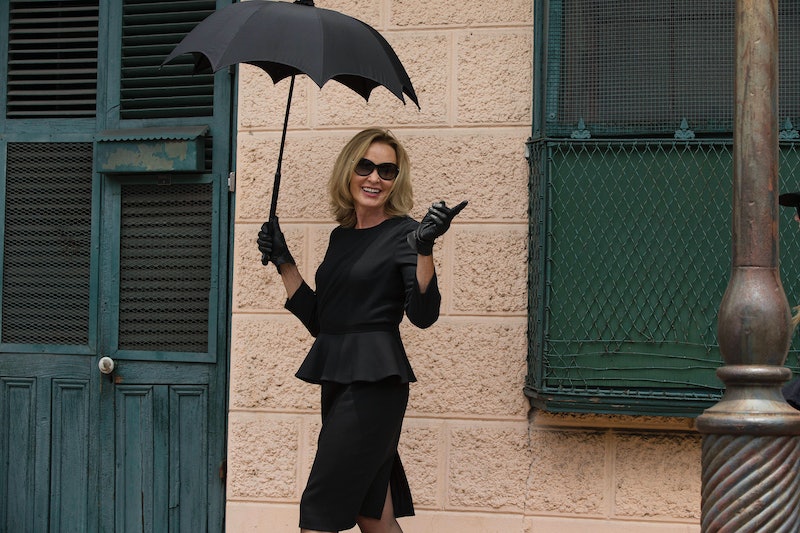 I understand that American Horror Story isn't necessarily for everyone. You mean, you don't want to watch countless people get murdered in gruesomely horrifying ways that are guaranteed to give you nightmares for years to come? What is wrong with you?! So yeah, I get it. Not watching saves you a lot of sleepless nights and countless therapy bills. But by the same token, it also means you don't get to experience one of the greatest aspects of the show — Jessica Lange. Though this series is swarming with incredible female talent, this actress's performances are unparalleled and manage to steal the show each and every time. Just this week alone Lange channeled her inner-David Bowie during AHS: Freak Show 's season premiere, proving that she can rock a blue pant suit and tie better than anyone. (Eat your heart out, Olivia Pope.)

And while Lange's roles are vastly different with each passing season — having played everything from a murderess Southern belle and religious tyrant to the leader of a witch coven and now a carny sideshow — there is one major thing all of her characters have in common. They have TONS of sass. Buckets full, actually. Yep, there's no doubt that Lange knows how to throw some serious shade when she wants to — something that Lea Michele recently found out firsthand on the AHS red carpet. (LOL!)

But just in case you need anymore convincing, check out some of Lange's most sassiest AHS moments below and have this be yet one more reason why she simply can't leave this show. All hail the Queen of Sass!

When She Broke Down Gender Barriers

You don't want to mess with this nun.

When She Threatened the Help

Right Before Doing This

When She Owned Her Position

I'm putting this on my next set of business cards.

When She Made This Fashion Burn

When She Owned This Side Eye

Putting all other side eyes to shame.

When She Just DNGAF

When She Doled Out Nicknames

But there's more where that came from.

When She Gave This Diagnosis

Do you guys smell smoke? Because someone just got burned.

When She Got In Touch With Her Inner-Martha Stewart

When She Taught This Important Dance Lesson

When She Was Too Good for This Conversation

In other words, stop talking.

When She Made This Wizard of Oz Reference

When She Morphed Into a Protective Mama Bear

Something tells me, she's serious about this.

When She Could Not Care Less About Your Problems

No use crying over spilled blood. (That's the saying, right?)

When She Was Cleverer That All of Us

Which (witch?) is basically all the time.

When She Showed Her Enthusiasm

When Her Decisions Were Challenged

When She Refused to Be Treated Like a Commoner