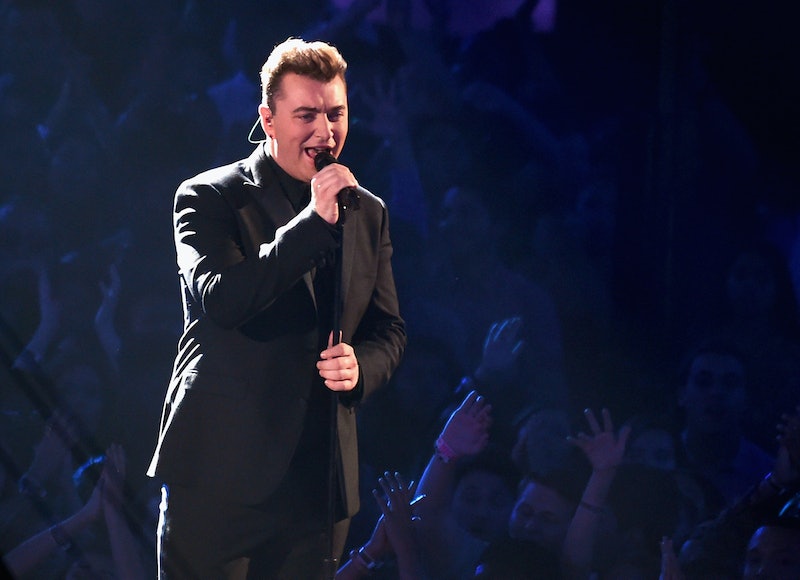 Considering I've only gone to karaoke a total of three times (which isn't nearly enough), I'm by no means an expert. But I will say any time I've gone, I've had to request a Destiny's Child song. Preferably "Survivor," since it really embodies all of that nostalgia from the early 2000s. Proving he's just like us, Sam Smith recently sang Beyoncé songs at karaoke in Nashville. Oh, what I would give to hang out with Sam Smith and sing Beyoncé songs! Looking like he had the time of his life, he performed "Say My Name" and "***Flawless" with a group of friends.

Despite the angelic voice that we know and love from his songs like "Stay With Me," this impromptu karaoke sesh may have not measured up to his usual level of talent. Entertainment Tonight's website called it "sloppy," but I think that's a bit harsh. After all, no one does Queen Bey better than Bey, and he was just having fun. Give the guy a break!

Speaking of taking breaks, reportedly Smith bailed on the chance to meet fans after his concert earlier that night. He told them he wasn't feeling well and needed sleep... But then a few hours later, that's when he went out and karaoked:

Did he lie to his fans? More importantly, does it matter? I'm gonna give him the benefit of the doubt and say no. He's only human! Haven't we all had times where we thought we were going to stay in for the night, but then decided to go out after some serious convincing from friends? That must've been what happened. Plus, no one can resist karaoke! He later tweeted that he had the best night, using a ton of exclamation points to really convey how much fun he had:

Now for your viewing pleasure, here is Sam Smith channeling his inner Beyoncé:

And a rendition of "***Flawless" that is perfectly imperfect in its own way:

Just to throw this out there, if Sam's ever in NYC and needs a group to go karaoke-ing with, I'll clear my schedule immediately!