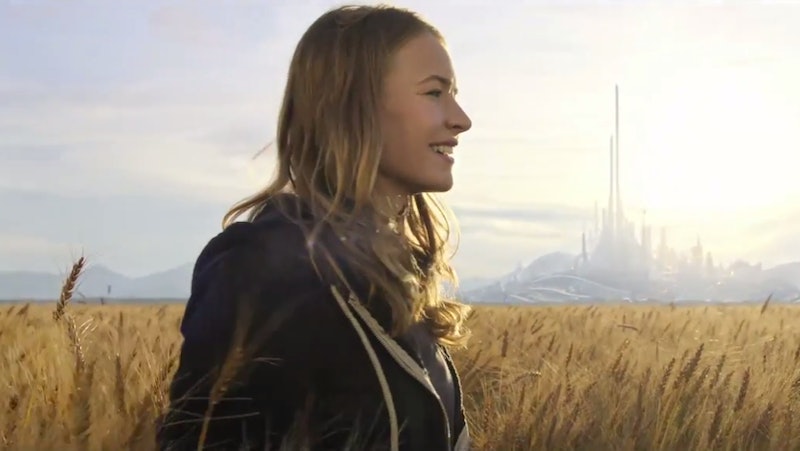 First things first: If you haven't yet caught the new teaser for Disney's upcoming film Tomorrowland , I suggest you watch it immediately before proceeding with this post. Not only does it look like a solid, promising film (that includes the added bonus of a very good-looking George Clooney), but it's a perfect example of how Disney took the concept for a specific "themed land" at Disneyland, and turned it into an entire movie with storyline, drama, dialogue and all. Sure, Tomorrowland has nothing to do with Disneyland's Tomorrowland land, but the base elements — futuristic world, sci-fi setting, etc. — are all there, so it's similar enough to still capture the overall theme.

That in mind, I got to wondering: If Tomorrowland would turn into a super futuristic, fantasy, sci-fi film starring Britt Robertson, George Clooney, and Hugh Laurie, what sorts of films would the other lands of Disneyland inspire? Fantasyland, Toontown, Adventureland — there's a lot of untapped potential to make those lands into an entertaining, classic Disney film.

So, of course, like any good journalist, here are a bunch of ideas courtesy of yours truly. Disney, if you want to use any of these, please feel free — I know you'll definitely remember to send me a royalty check in the mail at some point.

So, what would the other Disneyland park movies be like?

Obviously, this would be a cartoon starring Mickey Mouse, Minnie Mouse, and Goofy — they all have "houses" in Toontown, after all.

Frontierland would definitely be a Western-style film, with lots of outlaws, a bumbling sheriff, and a mysterious, edgy new face in town who has a darkness within him, but is a good guy at heart. Also, lots of intense, dusty stare downs, and a barkeep who can expertly slide drinks across a bar.

Though this one has been done to some effect with Disney's 2003 movie The Haunted Mansion, that movie didn't quite focus on capturing the unique feel of New Orleans that Disneyland's section of the park does. A New Orleans Square-type film would be a feel-good family musical, with lots of singing, lots of jazz, and lots of delicious-looking beignets — just like the city itself.

This would definitely be a fun sci-fi adventure — perhaps somewhat reminiscent of The Wizard of Oz meets ABC's Once Upon a Time. Fantasy implies a storybook-like setting, so the film would take place in a perfect fairytale land of sorts, that, perhaps, gets taken over by a dark queen set on ruling the world as her kingdom — and the only person who can save the land is its true ruler, a regular girl from regular town, U.S.A., who doesn't know her true calling. The Princess Diaries with magic?

Obviously, the first thought that pops into mind is something Indiana Jones-esque, considering the actual Indiana Jones-themed ride is in Adventureland — and since gut feelings are often correct, that's what I'm going with. Adventureland would be an adventure film through and through, and probably focus on a young teen who accompanies his father on a run-of-the-mill archaeology expedition only to discover the portal to a secret magical world within a cave. Though it seems cool at first, danger lurks, because all movies need drama to be worth seeing.

Disneyland's Main Street U.S.A. is pretty much gift shops, ice cream, and museum-esque attractions, so this would be a stretch to base a movie off of. However, the fact that it's the one normal (albeit whimsical) part of the park just before things turn to the futuristic, the sci-fi, and the fantasy, perhaps a film based off of Main Street U.S.A. could focus on small a town full of people who are unable to see the magic around them amidst their boring, droll lives — except for one girl who discovers her extraordinary ability to see everything that others can't. It'd be a family-friendly fantasy film, for sure.