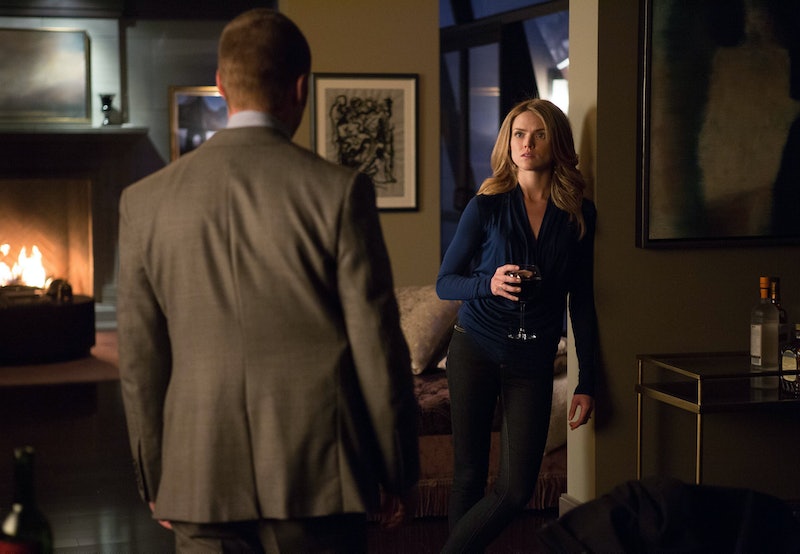 It seems that every character on Fox's new Batman-centric drama Gotham is keeping their fair share of secrets, but perhaps the most unexpected character to harbor a dark past is Jim Gordon's wife-to-be, Barbara Kean. This season has hinted at a few of Barbara's secrets, but last Monday's episode "The Balloonman" gave us the biggest clues as to what Barbara may be hiding from Jim. We now know that Barbara and Renee Montoya have a romantic past, and that at some point, Renee was hooked on drugs — she claims in "The Balloonman" to have stayed clean for an entire year. And Renee doesn't seem to be the only Gotham character who struggled with substance abuse — she was noticeably concerned to walk into Barbara's home and find her ex smoking a joint. These small clues about Barbara's past point to a major secret that Barbara — and seemingly Renee — is keeping.

And it seems like a doozy. The actress who portrays Barbara, Erin Richards, spoke about the fact that her character is hiding a dark history — and that it could drive her and Jim apart. What could be so bad that she wants to hide her own past from the person she plans to spend her future with? Here are some theories on what Barbara might be hiding from Jim.

She Was Involved With Drug Dealers

Both Renee and Barbara appear to have a past history with drug use, as revealed in "The Balloonman," but it seems odd that Barbara would hide a past of drug use if she is now sober. Though the conversation between Renee and Barbara in "The Balloonman" didn't deal with specifics, the talk did seem to hint that they both "got out" of something before things got too bad. Barbara may appear like a near-perfect member of society, but there's no telling what she could have done before Jim came into her life. Could she have gotten in over her head with the very people that her future husband is looking to bring to justice?

She Comes From A Criminal Family

Compare Barbara's apartment to the many seedy homes we've seen so far on Gotham and you have to wonder where this woman got the money to pay her rent. We don't know what Barbara does for a living just yet, but it doesn't seem like she has a particularly high-powered job — she was getting high in the middle of the afternoon, and I'm not sure any job gives you that long for lunch. It's more likely that her money comes from her family, perhaps a family that didn't exactly make their cash in the most ethical way. Barbara could have wanted to distance herself from her former life of crime — or at least her family's — and is afraid that telling Jim would mean her past has caught up with her.

This seems unlikely now, but there's a strong chance that Barbara could follow the path of another DC Comics character named Katherine Kane. The similarities are interesting: Both Katherine and Barbara appear to live a socialite lifestyle (remember that "event" Jim begged Barbara to get them out of in the pilot episode?), have had romantic relationships with women, and share an very similar sounding last name. (Kean and Kane?!) In certain versions of the Gotham universe, Katherine became Batwoman — could that be Barbara's fate?

It's not the only clue from the comics that hints at Barbara taking on a crime fighting agenda. In the comics Barbara Gordon — the daughter of Barbara and Jim — takes on a secret identity as Batgirl and fights crime alongside the masked vigilante. If Barbara isn't donning a superhero costume right now (unlikely, considering that Batman is still playing swords with Alfred) she may be working her way up to vigilantism — possibly due to some traumatic event from her past that spurred a thirst for justice.