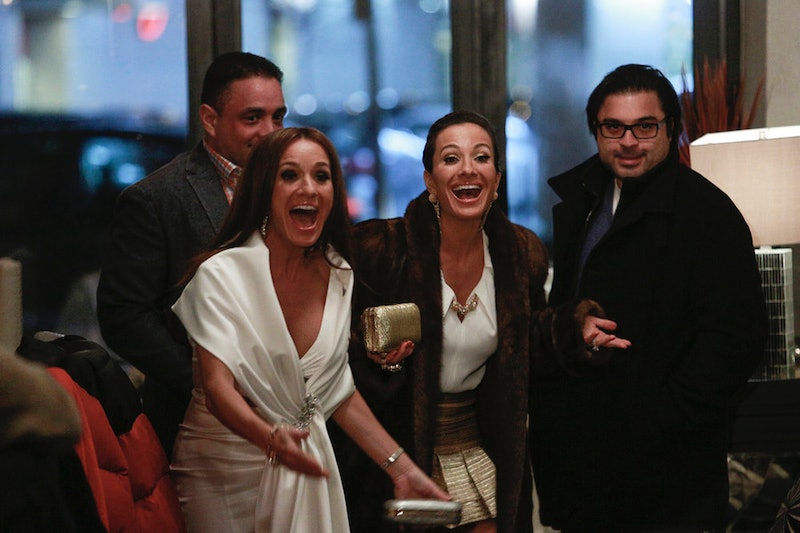 While Teresa and Joe Giudice worry about the fallout for their very serious legal problems, the rest of their Real Housewives of New Jersey castmates are arguing over much more insignificant matters. After all of the rumors about the Napolitano/Aprea family, plenty of the ladies promised to get lawyers involved. But The Real Housewives of New Jersey lawsuits probably won't be happening because of limitations on their ability to sue. We already knew from what Carole Radzewill dropped in her interview with Reality Tea that Bravo does in fact build clauses into their contracts that limit their ability to file lawsuits.

There was a promise of legal action already from Teresa, her husband Rino, sister Nicole, and their mother Santa at various times to various sources, with Teresa telling Us Weekly that Santa wants to sue Jim for slander. And Jim already bragged about being able to sue anyone into oblivion and humiliate them on the show when Nicole went after Amber at the first responders party. But since he's not an official Housewife, is Jim shackled by contracts or free to be his litigious, petty self?

Turns out, the situation is way more complicated than it seems. Jim claims that "contracts" are preventing a RHONJ courtroom battle, but he's complicated things by saying in addition to the official Bravo contracts, there was a separate contract signed between the Marchese family and Bobby Ciasulli also limiting his ability to sue. He even tweeted a section of the contract as "proof," though all he included were the first and last page of a generic confidentiality agreement.

That has been denied vehemently by Bobby, who's leaving it all to the reunion… where Jim was not invited. Bobby claims that the confidentiality agreement Jim tweeted was signed by the Marcheses, Nicole, Teresa, and himself, but was just a simple non-disclosure agreement to not talk about the show while they were being considered by Bravo's casting department. Now that all five of them are on the show, there should be no reason why an NDA is relevant, would stop Jim from suing Bobby, or stop the twins/their mother from suing Victoria Gotti.

Jim complicated things further by claiming to Radar Online that he also made the twins sign a different agreement with him in March of 2013, which he says is around the time when casting directors starting looking for potential new Housewives: "the twins, on March 13, 2013, signed a contract specifically indemnifying me against any civil action (including defamation) with legal fees paid at 150 percent." Neither Nicole nor Teresa have commented on whether or not this is accurate.

But if Jim is referring to an official Bravo contract, than yes, he might not be able to go to court — the document obtained by Radar pretty clearly states that if participating in one of Bravo's reality shows:"I am giving up certain legal rights under this agreement, including without limitation, my right to file a lawsuit."

The contract prohibits the participant from suing anyone associated with the show or any of the companies producing the show, even if something scandalous, secretive, or defamatory is said (in fact, the contract basically says to accept that something embarrassing will pop up on the show). So even if the Santa/Rino rumor turns out to be 100 percent false, Teresa can't sue the show for basically saying and implying the opposite for the past four weeks, unless she wants to pay upwards of $50,000 in penalties.

However, there are a few things that don't make perfect sense about this. The RHONJ contract posted by Radar Online only seems to limit lawsuits from being filed against employees of the Bravo production companies. But the contract also takes pains to say that the reality stars are not employees and this contract limits them from receiving any payment. Since all of the big stars like Teresa Giudice have incomes from the show, they likely sign specialized agreements — and if they get compensation from Bravo, it would make them employees of the company and off-limits. Santa (not a Bravo employee) has said she intends to sue Jim (also presumably not a Bravo employee), but it hasn't happened yet.

So there are three possible reasons why Bobby, Nicole, Teresa, Santa, Rino, Amber, and Jim (whew) have yet to see the inside of a courtroom.

1. An NDA between Bobby and Jim.

3. Bravo trying to avoid all of this by limiting lawsuits in their contracts.

Well, and 4. They realize all of this is based on he said/she said, which would make for a messy and complicated case. That helps to explain why everyone and their mother (literally) aren't already in court.