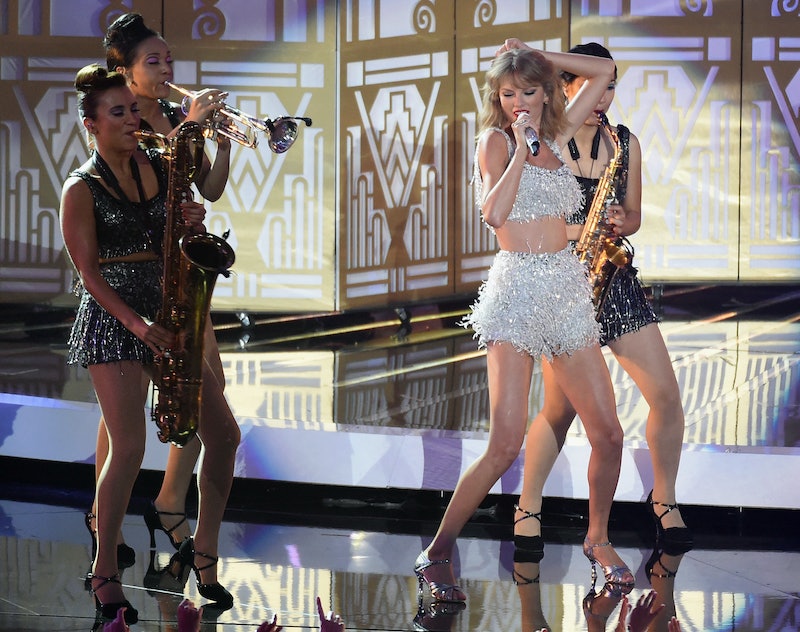 While promoting her upcoming album, 1989, in London this week, Taylor Swift covered Vance Joy's "Riptide" in the BBC Radio 1 Live Lounge — and it's absolutely awesome. Her beautiful, controlled performance proves that the 24-year-old "Shake It Off" star is truly at her best when she's able to focus on singing and doesn't have to worry about choreography or elaborate staging. It's amazing just how comfortable, confident, and relaxed Swift looks sitting behind a piano. As she continues to make her transition from country music to pop, I hope that we'll get to see more performances like this one from Swift — because, in my opinion, they really do highlight her strengths as an artist. Unfortunately, I don't know if that's going to happen.

There seems to be a bit of a double standard in pop music today: Women are often expected to "put on a show," to dance AND sing at the same time (or at the very least, to deliver some sort of visual spectacle),\ while it's totally OK for men to just stand on stage and do their thing. Of course, there are notable exceptions (performers like Bruno Mars and Usher immediately come to mind) and 15 years ago, boy bands like the Backstreet Boys and *N SYNC were definitely expected to dance — but that just doesn't seem to be the case anymore.

Take One Direction, for example. Aside from when they're just goofing around on stage, they don't really dance — and they're all massive pop stars. Yeah, they might run around a little bit, but you won't catch them busting out any '90s boy band–level choreo, that's for sure. Sometimes, they literally just stand in a circle and each band member steps forward when it's his turn to sing. And you know what? It works for them! It would be silly to force One Direction to do something that they're either not very good at or not very interested in — so, why does Swift sometimes perform in a manner that doesn't really suit her talents? Does she feel pressured somehow? I wonder.

Just look at Swift's "Shake It Off" performance at the 2014 MTV Video Music Awards. At times, she was barely able to sing the song's chorus because she was so distracted by hitting her dance moves and having to travel around the stage. I guess I just don't believe that Swift would make performance choices that could potentially negatively impact her ability to sing, unless, of course, she was feeling some sort of outside pressure to perform in a certain way.

Does this double standard exist in part because women in pop music are constantly being told that they need to be sexy, and dancing and "putting on a show" are seen by record labels as opportunities to boost their sex appeal? It's definitely a possibility — and Swift isn't the only woman who seems to be affected.

Consider Ariana Grande's recent appearance on Saturday Night Live, for instance. Though she sounded fantastic singing a "stripped-down" version of her single "Break Free," about halfway through the performance, she switched gears, and the ensuing choreography really put a damper on things. Why couldn't Grande have let her back-up dancers do the moving and shaking for her while she stood front and center and nailed the vocals? Grande and her management team have to know that her overall performance suffers when she starts to dance, right? So, why bother?

There are more examples. Even though Katy Perry isn't an especially gifted dancer, she still puts a lot of energy into the choreography and staging of her live performances — energy that would probably be better spent focusing on her singing (which isn't always "up to snuff," if you ask me). In fact, her tour shows are known for being so chock-full of neon-bright scenery, props, and costume changes, it's hard to even know where to look. And yet, it's clear that Perry shines brightest when she's just standing behind a microphone with her guitar — as evidenced by this 2011 performance of "The One That Got Away" on X Factor UK.

Shouldn't we want artists to focus on doing what they're good at? In my eyes, true pop stars, regardless of gender, know their strengths, understand their limitations, and perform in a way that showcases the best of what they have to offer. Those are the expectations we should have of our pop stars.